First appears at 0.44 and passim in "Futuroid"

"Futuroid" is an inspired bit of wordplay that I tried to deploy once when teasing out different ideas of what futurism and futuristic-ness might mean in music.

Extracted from its original context of meaning,  here "boy, this is too much" works as a comic yelp expressive of Toffler's future shock

"Future? You can't handle the Future"

Other raw materials for the Noise Factory

Now the "I bring you the future, the future" bit - I'm guessing that is the voice of the record's creator? Or a mate?

But then there's that American old-timer warning that where we're going the country's very wild and dangerous and we'll have to cut through jungle and climb mountains so high they reach above the clouds.... presumably from some Hollywood movie.

And a stray "watch dis"

Not forgetting "dubplates playing in the ghetto tonight"

So whosampled doesn't have the full inventory by any means.

Ah! There is a fuller inventory at Discogs which references a vocal from Johnny Osbourne's "We Gonna Rock It Tonight" and the American male voice being from The Treasure Of The Sierra Madre

"Breakage #4" on the EP is the same song remixed. 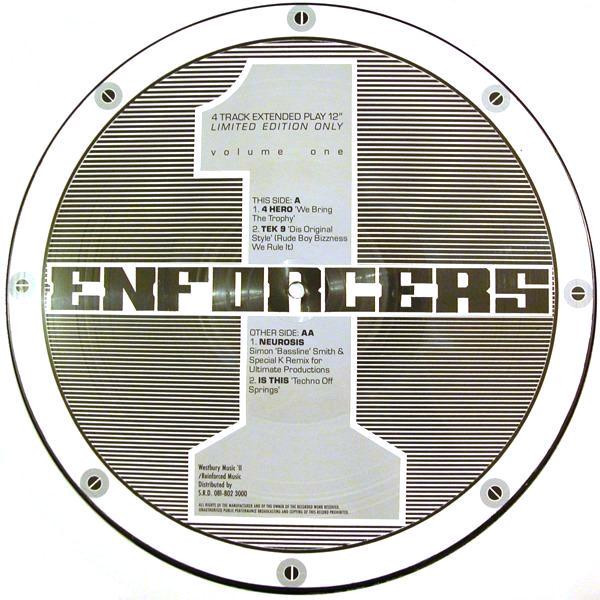 Or is the question "Is this Techno's Off Spring"
It's weird to me that 4 Hero - under an alter-ego, Is This - would do something so passively inspired.
It's not so much offspring (as that would suggest the idea of another genetic input shaping the outcome, if we're going with sexual reproduction as the metaphor here) as it is a clone of Detroit.
(Then we get into all that kind of quasi-biologistic stuff about bastardy and "illegitimate offspring tend to lead more interesting lives"  - True People, hereditary proprietorship, pedigree versus mongrels, the dangers of inbreeding, recessive genes...)
Below, an unreleased Is This bit that is less shackled-to-the-Source-of-All-Things. Indeed it sounds more or less like a 4 Hero tune, with the breakbeaty shuffle.
Ah, they put out a whole EP on Reflective in '93, the techno-phile sub-label of Reinforced
this one is nice
4 Hero's true Detroit-homaging alter-ego was Nu-Era  - whose '94 album was reissued last year...
A latter effort that is mutating into broken beat
Now I got that first The Deepest Shade of Techno compilation on Reflective back in the day
Don't remember much about it, though
Both the first comp and Deepest II are playable here.
There's a Gerald track on it (he could do some very Mayday-ish tunes)
Posted by SIMON REYNOLDS at 8:33 AM No comments:

you could feel the tension

I say, you want to hear an actual Last Poet does jungle track?

I think the "Roll Out" version was my preferred mix by a whisker - but both Die & Size sides got played to def that almost-a-year we spent in Belsize Park in '94. Joy would have heard the bass rumblizm coming through the wall between our workspaces.

She recognised the tune instantly.

That near-year in Belsize started with this beaut, which was getting near-constant play on the pirates in wintry early months of '94

"that dream is over"

Beggars belief that he didn't release this in the Nineties.

Posted by SIMON REYNOLDS at 9:50 AM 5 comments: