they make it sound like something by Atomic Rooster!
Posted by SIMON REYNOLDS at 9:56 AM No comments:

even "This Too Shall Pass Away"
Posted by SIMON REYNOLDS at 8:00 PM No comments:

PIRATES OF THE AIRWAVES
director's cut The Wire, 2008 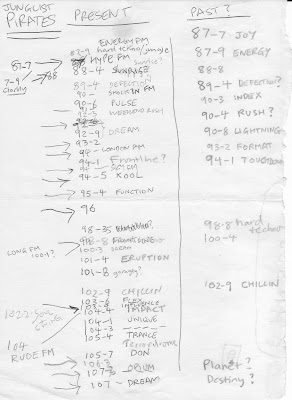 In which case, if only I'd used higher quality cassettes! Before I got wise, I'd tape over unwanted advance tapes from record labels: since the radio signal could often be poor, buying chrome blanks seemed a waste . Plus, in those early days, I wasn't doing it out of some archival preservationist impulse. Like a lot of ravers I was just taping to get hold of the music, something hard to do otherwise because deejays rarely identified tunes. Later I'd discover that many were dubplates that wouldn't be in the shops for months anyway; in some cases, they were test pressing experiments that never got released at all. I was taping simply to have the music to play through the week when the pirates mostly dropped off the airwaves, and in 1993, when I spent large chunks of the year in New York, I took the tapes with me to keep the rave flame burning during my exile.

The crucial added element to these tapes, something you don't get from the original vinyl 12 inches played in isolation or even from the official DJ mix-tapes and mix-CDs of the era, is life. In two senses: the autobiographical imprint of my personal early Nineties, someone hurled disoriented into the vortex of the UK rave scene and still figuring it out, but also the live-and-direct messiness of deejays mixing on the fly and using whatever new tunes were in the shops that week, of MCs randomizing further with their gritty and witty patter. The tapes are capsules of a living culture. Something about the mode of transmission itself seems to intensify the music, with radio's compression effect exaggerating hardcore's already imbalanced frequency spectrum of treble-sparkly high end and sub-bass rumblizm. Pirate deejays, typically mid-level jocks or amateurs, also took more risks than big-name DJs crowd-pleasing at the mega-raves. Playing to a home-listening or car-driving audience, the DJs mixed with an edge-of-chaos looseness and squeezed in some of the scene's odder output rather than just sticking to floor-filling anthems.

Oh, they're not all pure gold, these tapes. Many shows stayed stuck at "decent" or slumped outright into "tepid". But the ones that ignited… ooh gosh! The vital alchemical catalyst was invariably the MC. On some sessions, it's like a flash-of-the- spirit has possessed the rapper, as electrifying to the ears as a first-class Pentecostal preacher or demagogue; you sense the MC and the decktician spurring each other to higher heights. It tends to be the lesser knowns that thrill me most: not the famous big-rave jungle toasters like Moose or Five-O but forgotten figures like OC and Ryme Tyme, who forged unique styles that melded the commanding cadences and gruff rootsiness of U-Roy-style deejay talkover with the chirpy hyperkinesis of nutty rave, or collided barrow boy argy-bargy with B-boy human beatboxing. Some of these tapes I know so well that the tracks are inseparable from the chants and the chatter entwined around the drops and melody-riffs; years later when I finally worked out what the mystery tunes were and bought them, they sounded flat without that extra layer of rhythmatized speech thickening the breakbeat broth. 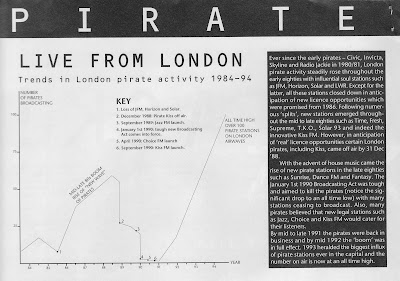 
http://www.hardscore.com/radiosets.htm
A sizeable cache of 1989-97 shows, mostly from the London area.

http://www.tapesgalore.co.uk/prtapes.htm
Huge selection of pirate tapes, albeit for sale rather than download.
Posted by SIMON REYNOLDS at 11:56 AM 1 comment: