immediately followed on the album by this wacked out spacy tune

who knew the people behind 'Celebration' could do something like that?

sort of vaguely reminded of this - more general vibe than specifics

Posted by SIMON REYNOLDS at 1:48 PM No comments:

Now here was I imagining that twas Beaumont Hannant  wot invented the word "texturology", which I nicked for Energy Flash

It was Jean Dubuffet, back in the late '50s 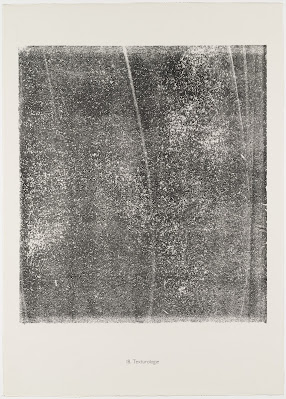 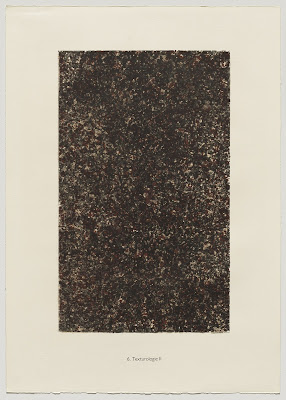 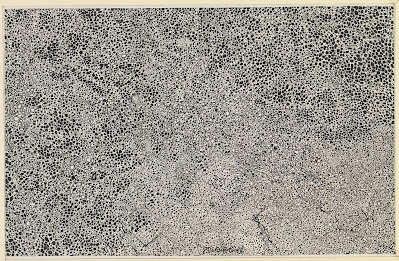 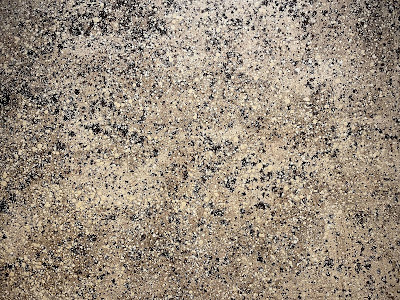 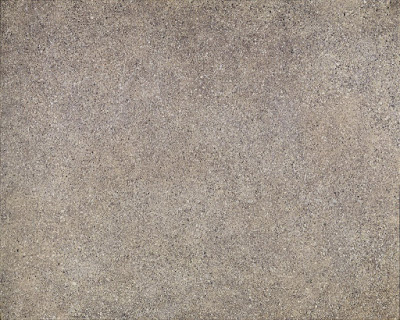 "Dubuffet invented various techniques to portray soil in a series of paintings called ‘Texturologies’. For this work [The Exemplary Life of the Soil (Texturology LXIII) 1958 - above], he adapted the ‘Tyrolean’ technique, used by stone masons to texture newly plastered walls. Dubuffet shook a brush over the painting, which was laid on the floor, to scatter tiny droplets of paint across the surface. His intention was to give an ‘impression of teeming matter, alive and sparkling, which I could use to represent soil, but which could also evoke all kinds of indeterminate textures, and even galaxies and nebulae’." - The Tate 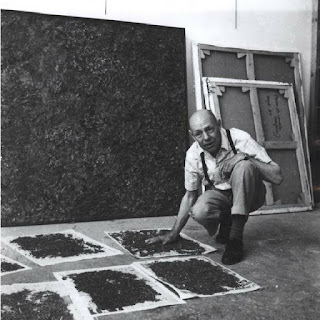 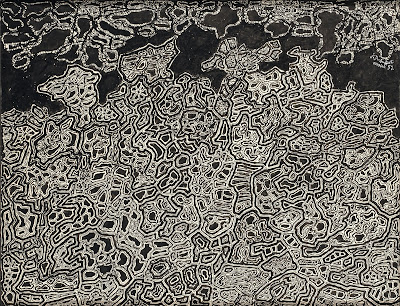 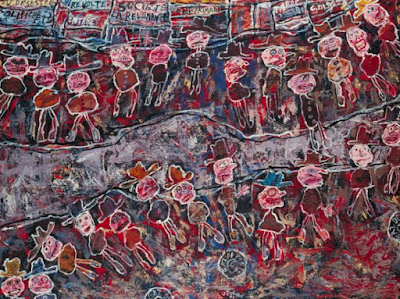 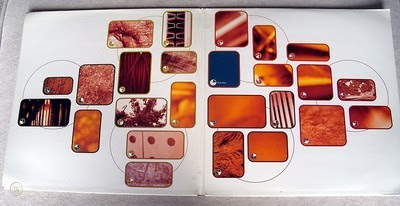 Posted by SIMON REYNOLDS at 10:32 AM No comments:

proto-jungle? kinda but not really

it's a great tune in its stiff way

now this tune ("The Ozone")

and one of Dem 2 actually had a postpunk / industrial background din'e?

otherwise thoughm never quite love-loved the Renegade Soundwave stuff, there was something a bit naff about them (the name, the trying-too-hard-hard-man thing)

explored in this 1989 review

A smart move, this. The voices were always an obstacle to enjoying Renegade Soundwave, carrying as they did all kinds of unwelcome connotations: "street credibility"; a clenched, unsmiling masculinity redolent of The Godfathers; a blunt, thuggish menace that colluded with the confrontation-by-numbers subject matter (gangsters, drugs'n'sex, petty crime, nailbiting). Eliminating the human factor has the salutary effect of bringing to the fore Renegade Soundwave's forte: the science of b.p.m., the architectonics of dub-space, dance music as girders and gradients. More groups should leave themselves out of the picture.

Apparently, CD players fill in the miniscule errors on CD's by making a considered estimate of what the missing fragment would have sounded like. And it's said that if you deliberately damage a CD you can trick the  computer to compose it's own spectral cyber-music that strays further and further from the organic original. "Phantom Sex" sounds like such a computer impersonation of rare groove, the chuntering, clavinet-squelching bump'n'grind turned to geometry. After this, however, Side One doesn't quite zap the nerve nodes. "Bacteria" is stripped down too far, until all that's left is a skeletal grid-beat drained of funk, plus some Andean flutes and mandolins. "Transition" suggests a desolate, uninhabited dancefloor, but is just too remote. "Pocket Porn" is creepy and clammy, but ends before it gets going, sounds like an off-cut of a grander garment.

"In Dub" comes into its own on the second side. "Women Respond To Bass" is still low-key, but spiritual with it: an almost ECM guitar twinkles in the far corner of the horizon, intangible whorls and eddies of ambient sound flicker at the thresholds of audibility. "Holgertron", by contrast, is upfront, predatory electro, a stalking cyborg-tarantula. "Recognise & Respond" elaborates a fantastical dub-labyrinth of archways and corridors. "Air Hostess" makes the album's solitary concession to "heart and soul" with an interlude of lachyrmose chords, but is mostly disembodied and decentred: at times, it really does sound like the body of the song has been eviscerated, but the hacked-off limbs continue to keep strict time.    The closing "Black Eye Boy" is the album's only outright dub reggae, with a mesmering cymbal pattern and horns that plummet lugubriously into the abyss between the beats.

"In Dub" is neither feet-motivating nor heart-pumping, but rather a cerebral pleasure. At best, it provokes a detached, cold admiration; at worst, a blank feeling of disconnection. It's asocial, an event that happens only to solitary individuals: no dancefloors will be fired up by this 'dance music'. In the same way that modern  cyber-technology turns the human mind into a screen, "In Dub" organises your headspace like a mixing desk. Prepare to have your consciousness remixed.

Posted by SIMON REYNOLDS at 9:48 AM No comments:


Posted by SIMON REYNOLDS at 3:19 PM No comments:

Posted by SIMON REYNOLDS at 2:28 PM No comments:

the easy spottable = beastie boys "Time To Get Ill"

the less easy spottable = Stephanie Mills "(You're Puttin') A Rush on Me"
spottage courtesy somebloke on the Facebook Old Skool Hardcore group
always heard that as "hu-mi-li-a-tion"!!  (puttin a rush on / oo - mill - ush- awn) (think it's been sampled elsewhere too, more mangled)
Oh wow, unexpected xtra bonus spottable accidentally spotted just now
the song is also the source of  Tek 9 "you've got to slow down"!!!

Posted by SIMON REYNOLDS at 3:59 PM No comments:

is sampled in this

feels like this could be a whole vast growth area for music, the superimposition of all-new songs on top of already perfect tunes, in a way that it's totally compatible and only enhances the original

sort of like the mash-up, but with 1/2 the mash being the all-new tune

very very clever - i saw what you done there

tangentially puts me in mind of FN's "How well disposed would a person have to become to himself and to life to crave nothing more fervently than the infinite repetition without alteration of each and every moment?"

A bigger chunk o' Ari in this one

the source - the  secret sauce - practically the whole thing, or the best bit of it =

okay that's a bit unfair, the plucky sounding instrument bit is good, and the talking East London youth, and the B-line, and the whistling angel-ghost sound

Posted by SIMON REYNOLDS at 1:19 PM No comments: