making good use out of Toni Braxton here

No idea who the soulful lady is though

Posted by SIMON REYNOLDS at 6:26 PM No comments:

Great post by CardrossManiac2  on the genius of DJ Crystl, celebrating him as a relatively undersung yet essential part of the ambient-jungle moment - the move toward musicality and finesse (said journey being better than the arrival, of course).

(The post is part of an ongoing series on the darkcore into jungle golden age, worth backtracking through - and keeping an eye for coming instalments)

Here - https://www.youtube.com/playlist?list=PLYrbm00SnK2aDMQbm52b_WgZUs77mMdu7 -  I've helpfully piled all the '93 Crystl gems the drossman's highlighted, plus a few others and then some earlier tunes and also some later tunes (including, at the end, the disappointing major-label swerve into hip hop / jungle hybrids, then followed by an even more disappointing silence).  It might be the entire corpus in fact.

Of all of them, the monster that turned my head around at the time is "Warp Drive". So colossal - one of several tunes alongside "Terminator" that really convinced me this is the future. That smashing  crashing break with the final drum hit haloed with reverb....

Apparently with "Warp Drive" Crystl was inspired by hearing Nasty Habits "Here Come the Drums"  - the drone-hum running through the whole thing, the stark minimalism - but verily I think the student surpasseth the teacher in this case, as good and as seminal as Doc Scott's tune is.

(Headz will recognise the Stevie Nicks quote in the blogpost title - and often I have, when listening to "Dreams", thought of DJ Crystl as opposed to whatever fairy-tale vagary Stevie means to evoke - that's just how my nuum-addled brain is wired)

The other gem of that  Crystl run is "Let It Roll" - those cut-glass snare sounds, the almost tabla-like ripples of hand-percussion - and apparently it will come in a follow-up post on Crystl's post-93 output.

Now I thought the "let it roll" in "Let In Roll" came from this hip-house classic
but according to online authorities it's from this
Posted by SIMON REYNOLDS at 2:53 PM 3 comments:

"All tracks recorded in 3D-Sound" 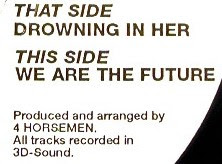 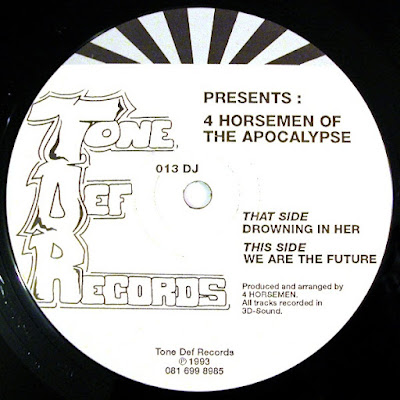 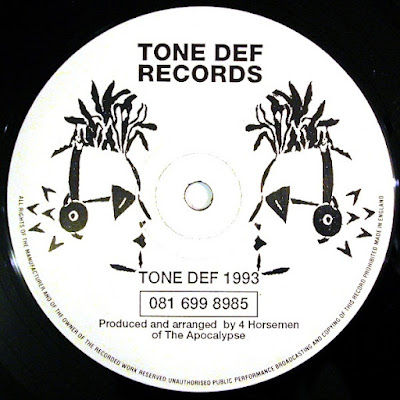 Got an email a few years ago from Tone Def supremo DJ Yomi, pointing out that 4 Horsemen did not simply = Foul Play alter ego, but was a collaboration with him. He was going to give me the whole 4 Horsemen / Tone Def story but never happened....  Would be interested to know how they vibed that vibe.
Posted by SIMON REYNOLDS at 5:34 PM 3 comments:

Minder your own bizniz

Thematic reminded me of this

Bruza - met him once.  Nice geeza. Him and Terror Danjah, in some kind of leisure centre or enterprise centre in Stratford, where the Aftershock office was.

Still one of my fave grime MCs

This is a fascinating tune, the way he addresses the subject of performance and what makes for believe-ability, where does authority come from, how do you conjure it...

Back then he  projected a case-hardened, older-wise persona, while still in his early 20s. Now he has the actual age and body to go with the gruff voice and old-head aura.
^^^^^^^^^^^^^

I haven't yet succumbed to grime nostalgia really (whereas bleep / ardkore / jungle, there aren't waves of nostalgia there - it's more like a perma-state, perennial), but perhaps it's about Tto come on, finally, 20 years on, punctually

after that date, it becomes inexplicably uninteresting to me, same MCs, same producers, but I dunno...

as for the 2010s wave, cannot for the life of me find the slightest twitch of desire to listen to Stormzy or Skepta

whereas Giggs say, or some of the drill, it can be addicting, certain tracks...

I suppose it's the dropping away of the whole cultural apparatus - pirates, dubplates, rewinds, etc - that make road rap or drill overall less compelling

when there are no solid-form-objects of the tunes, how does that work, in terms of libidinal economy? can you get attached to a videoclip?

samples ( a sample from?) this tune

But where does the original "people of chemistry ... people of rhythm" come from? A Nation of Islam speech?

It also pops up in this hardhouse track from 2000

This whole EP - or pair of EPs, with the remixes, is so great

I mean this next one, c'mon - world-historical

Gtting a feel of deja vu as I move inevitably to identify its constituents, like I might have posted them before  (the pathways of desire we trace and retrace, eh? like lines scored into the cerebellum)

For a bunch of months now, podcasters Nate Wilcox and Ryan Harkness have been doing this epic trek through Energy Flash, a chapter per week. It's the latest season of an ongoing series called Techno-Roll  (the name comes from the parent podcast Let It Roll). The previous candidate for in-depth extended discussion was Last Night A DJ Saved My Life by Bill Brewster and Frank Broughton. Later on they'll be doing Kit Mackintosh's Neon Screams.

As a capper to the Energy Flash season, I had a fun chat with Nate and Ryan - about how the book came to be, my approach and slant, etc -  which you can hear here and here.

Posted by SIMON REYNOLDS at 12:13 PM No comments: