On Saturday 26th May, veteran free party crew Crossbones join forces with rave promoter Drop The Bomb to bring you a night of the darkest hardcore techno music - Ravers Graveyard - running the full spectrum from primordial Dutch / Belgian darkrave through to gabber and gloomcore.

DJs and performers include: 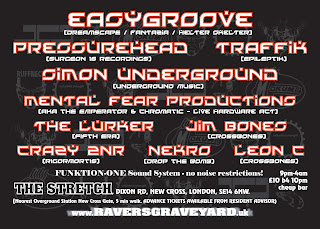 "nothing but hardcore (no mellow beats)"

mix by Low Entropy, maker of many tributes to hardcore of yore

and this early French hardcore mix

dude's Youtube channel is a trove of  deepest underground hard-fast-dark-doomy  -  some of fearful obscurity, names I don't recognise at all

Posted by SIMON REYNOLDS at 9:21 AM No comments:

Nicely does it / Gavin it large

Really like the additive logic in this one - building itself up by layers, in a leisurely, almost lazy, definitely non-urgent manner  -  in comes a vamp, and then a vamp at a slightly cross-ways angle, and then another vamp, and then a vocal lick, and then a pulse, and another non-verbal vocal bliss bit...

also really love the promise of that "it's not ovah!" (coming in courtesy of First Choice at various intervals), reassuring dancers looped into the groove that this track will just go on and on and ON (and it does go on and on for a full eight minutes)

Thought i did not know this SL2 remix and then within 10 seconds it's "ah!"

but it sounds a bit hectic after the E-Z groovin' first mix, which i prefer, having grown fond of it through  repeated play over the years of this rather compilation by Aphrodite (where "Hypnosis" only goes on for just shy of six minutes - not the full eight - and still feels endless and E-ternal, in a good way, a very good way)

Ah, i did not know that there was a follow up to Classic to the Core and it looks just as fine

but I beg to differ - the original is still the greatest

Did Pyschotropic - Gavin Mills + Nick Nicely, which Discogs is taking to be the Nick Nicely of Eighties neo-psychedelia cult renown -  did they do anything else of note?

Well, after "Hypnosis" there was "Psychosis"

And before "Hypnosis" there was  "Only For the Headstrong"

possibly they sampled it via this 2 in A Room sample-intermediary -  although the original Raw Silk tune was a big hit in the UK in the early Eighties and thus part of the dance folk-memory of the country ( i remember being stunned almost to the point of swooning when i first heard "Do it to the Music" on Top of the Pops, just for that intro)


And then there was also this by Psychotropic

Then getting a bit tougher and ever so slightly baleful

And here's a remix, from early 2000s, aimed at what scene I can not quite figure - tech house?


Ah, well Gavin Mills went on to be UKG outfit A Baffled Republic - one of those names that has a deep nuumy mystery to me (what on earth is it getting at?) - among many other guises

And you can feel a connection there, between the easy-glide of "Hypnosis" and the slink of "Bad Boys (Move in Silence)"

this remix by Steve Gurley eclipses the original though

Posted by SIMON REYNOLDS at 3:22 PM No comments:

crikey i only just noticed the pun in their name!

reminds me of this beloved and venerated tune


Posted by SIMON REYNOLDS at 3:21 PM No comments: 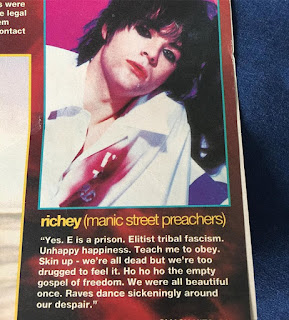 yeah making well-tardy Clash knock-offs, GNR-aspiring but Bon Jovi-achieving crossover, and Magazine-JoyDiv torment-redux was a far more valid / vital response to the impasses of the Nineties wasn't it?

a very pretty, very clever guy - and endearing -  but if ever someone showed that beauty and brilliance aren't enough w/o a smidge of E-Q (that's emotional intelligence quotient) then it was poor old Richey E
Posted by SIMON REYNOLDS at 3:21 PM No comments:

Posted by SIMON REYNOLDS at 11:08 AM No comments:


‘Diversions 1994-1996′ is made up entirely from samples from the collection of Lee Gamble’s Jungle cassette mixtapes. The audio has been subjected to analog and digital deformations, whilst trying to extract, expand upon and convey particular qualities emblematic of the original music. The effect is that of a musical body scan, all that is solid melts into air. Sounds are unearthed, dissected on the operating table, melted and unlocked , evoking sonics not unlike the heavy dub processes of Jah Shaka and Scion in a INA GRM frame of mind or bearing a similar methodological approach with what explored Mark Leckey in his piece “Fiorucci Made me Hardcore”. It can be heard as a ‘memory’ of a period of music and for some could work as a ‘cued recall’, which is a form of memory retrieval. Lee Gamble started out as a teenager dj-ing on pirate radio and on the emerging Jungle scene, however his own approach to music has taken a more experimental direction. Exploring the outer realms of abstraction through digital synthesis/resynthesis, Lee has described his current compositional process as: “…The configuration of material (ex nihilo) via various digital synthesis methods, prompts further disfigurations and reconfigurations. What you then have left is often the detritus or debris of an idea. Phantasms of both previous and current musical, pseudo-scientific and sculptural influences are manifest as new material abstractions, created from the digital blank canvas. This abstraction allows several interests to appear in the works simultaneously…”. He is a also a founding member of the UK-based CYRK collective and has curated/co-curated several Cyrk events. He has also produced and curated three radio series for London based radio station Resonance104.4FM and he continues to DJ. Lee has released his computer compositions on the Entr’acte label and has collaborated with composer John Wall and artists Yutaka Makino and Bryan Lewis Saunders. ‘Diversions 1994-1996′ E.P is is the beginning of a longer-term collaboration with PAN which also includes a full length album later this year.

The 12″ is mastered and cut by Rashad Becker at D&M. It is pressed on 140g white vinyl which itself is housed in a silk screened pvc sleeve with artwork by Kathryn Politis & Bill Kouligas.

gabba in the park

i'm fairly certain i was at this  - for at least some of the day - it was only four blocks up Avenue A from our apartment block, so it would have been pretty remiss of me not to attend!

gabba in the outdoors, in the middle of the day -  incongruous, cool, crowd enthusiastic as hell - but in the end somehow not right - it's music for dark doomy dystopian hangars or "huge space arenas" innit

how on earth did they get the permission? the area where the stage and "dancefloor / moshpit" is flanked on either side by children's playgrounds!

Posted by SIMON REYNOLDS at 9:46 PM No comments:

Posted by SIMON REYNOLDS at 9:45 PM No comments:


a group that inspired Marc Acardipane

a dad and son operation, linked to the Boccaccio nightclub in Ghent, he said


here though they are just keeping in with the crowd, the dominant sound

slaves to the raves


the original is still the greatest

I think it's the PCP mix that I always loved

Never even heard these takes

ooh quite exciting that one, a real slip n slider of a riff

and this is a later one

which has stolen the title, but the sound is stolen from DHS 'House of God'


Posted by SIMON REYNOLDS at 11:51 AM No comments:

Based on those five tracks, he's definitely in contention.

And the rest ain't too shabby neither.

Masters of the Universe


Posted by SIMON REYNOLDS at 9:47 AM No comments: