"Another mistaking of metronomy for feel, vagueness for profundity. Somewhere in this flabby seven minutes of pffft [Arcade Fire, "Reflketor"] there's a shitty 2 minute song waiting to break out. I'm not being picky. I'm just having standards i.e demanding that a pop song gives me pleasure, doesn't bore me, doesn't coast, doesn't come across as entirely unjustifiably pleased with itself. 'Reflektor' has not one moment of pleasure or wonder in it, only the smug constant insistence that hey wow, we're cool cos we're a rock band but we're trying to play disco. (That boom-tish alternated hi-hat rumble every fucker has down pat when they wanna get 'dancey', another rhythm section that thinks it's Frantz/Weymouth that hasn't listened to enough Dunbar/Shakespear to even come close). Broken down to it's constituent elements everything that should work is in place on 'Reflektor' (even that 'k'), James Murphy pushing all the right buttons to try and heat things up, eventually failing to stop it flailing because what's being played is so bereft of heart and purpose, the changes so signposted and monotonously run through you're simply witness to them going round them over and over again without any real sense of movement or import. Simply not good enough when the frontman and band are clearly such tedious & arrogant individuals they have to hide their non-personas behind 'zany' masks (and what a fucking tired trick that has become for a whole generation of indie meh-merchants) in the Cjorbin-annointed video. If you're going to make music like this you need words interesting enough, a personality big enough or voice intriguing enough (Bowie, Grace, Donna) to imbue all that rotational repetition with a sense of dramatic art and change. 'Reflektor' contains none of that, just sits wobbling like a wodge of flavourless jelly slopped on a bassbin, Bowie's fleeting appearance offering merely an aggravatingly tantalising glimpse of what might've been if a human being rather than a pack of 'tastemakers' had had a go at this 'song'. Pass."

Posted by SIMON REYNOLDS at 9:15 AM No comments:

never knew he done a single on Strictly Rhythm
Posted by SIMON REYNOLDS at 10:25 AM No comments:

Posted by SIMON REYNOLDS at 8:00 AM No comments:

Dance explosion, fueled by euphoriant drug, is followed by messy phase when the drug is cut with adulterants and surrogates, leading to bad reactions and deaths.... confusion, excess, paranoia, recklessness and wrecked-ness.

Mixmag with a report on how MDMA powder aka Molly, the cult of which was based on its purity and reliability compared to Ecstasy in pressed pill form, is nowadays, almost inevitably, increasingly turning out to be adulterated or bogus, with thje substitute substances in most cases being the MDMA analogue Methylone.

"The Miami Herald reported that in just 12 months there had been a staggering 16-fold increase in seizures of methylone, while MDMA seizures had dropped off a cliff. In 2011, Miami police reports show drugs sold as Molly were seized and submitted for testing 207 times. The overwhelming majority – 190 – contained MDMA, while just 17 contained methylone. But in 2012... testing proved that 278 samples contained methylone, and just 59 contained MDMA"


“Methylone is fun, but I’d rather have MDMA for sure,” [Mark, a London-based DJ] says. “Methylone makes me sweat like hell, and gives me a tight jaw. The high isn’t as deep and is a shorter buzz. It can make you quite touchy-feely and even horny – it’s pretty good for sex, though most guys can’t come on it. But the thing I least like about it is that it leaves me wanting more, like coke. Also, methylone is a little more harsh on the comedown and leaves your heart beating quite hard, whereas MDMA doesn’t,” he says. “I wouldn’t be totally pissed off if I got some methylone for a night out, but I’d want to know what I had – and I’d want to pay less for it.”

As an adulterant, it’s among the least bad things it could be, nowadays. Luckily, it’s not massively toxic and the dose range isn’t that different to MDMA – a standard dose is around 100mg, or a tenth of a gramme, much like ecstasy.

Other common adulterants in US pills and capsules include TFMPP, a vile drug that will make you feel wakeful, hot and restless, and 5-MEO-DipT, a powerful drug that should never be mixed with other substances as it can react badly and cause spasms.

The report is by Mike Power whose book Drugs 2.0 – The Web Revolution That’s Changing How The World Gets High is an in-depth exploration of modern drug culture and the rise of analogues bought and sold through the internet. More info here.

Big question about how all this will affect EDM: is the music going to get darker, more twisted and febrile, more interesting?


Posted by SIMON REYNOLDS at 10:43 AM No comments:

sometimes they're talking about E, sometimes the tracks just sound they're made under or for those under the influence of E


Posted by SIMON REYNOLDS at 4:05 PM No comments:

retrorave - Living In the Past by Manix

as the author of Retromania, I deplore it

as the author of Energy Flash, I adore it

blurb from the website: "A return to the original sound of Hardcore/Jungle Rave from one of the leading artist at Reinforced Records. Produced by Marc Mac of 4hero, this stunning 10 track album is full of the same energy and style that made Manix so crucial to DJs and Ravers of the era.   Packed with all new original fresh tunes but still sounding like a lost recording from 1993, anthemic pianos, big bass lines and breaks."

oral history of electronic music in the GDR / East Germany 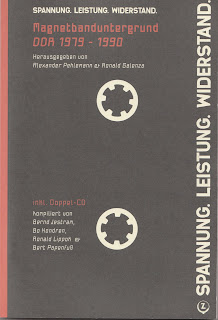 Posted by SIMON REYNOLDS at 10:23 AM No comments:

originally released only tape (the primary format there, then), now resurrected on vinyl

more from Hupnosaurus
Posted by SIMON REYNOLDS at 11:37 AM No comments:

EDM gets messy, heads into the darkside?

feature on why MDMA is destroying EDM at Consequence of Sound

the question, I ask, with the coldblooded aesthete / genreologist's perspective, is will there be EDM tunes as radically dark-blissed as this?

and this and this?


Posted by SIMON REYNOLDS at 8:21 AM No comments:


via blog to the oldskool
Posted by SIMON REYNOLDS at 8:21 AM No comments:

not Nineties revivalism but Nineties survival-ism

and fuck me, the third one in the series is about drum'n'bass! my derision turned out to be prediction

someone involved, or connected, gave this rationalisation via twitter -- "no one ever claimed these were new things, just that they existed. and as such, justify analysis."

erm, i'd have thunk, to be honest, it had more than enough analysis, drum 'n' bass, over the years....  i confess to being sated, in that department... perhaps that's the reason for its living death, being analysed to death


"refusing to die" (yet ceasing to change, grow, evolve), that would suggest something faintly monstrous, going against nature, about the entity in its umheimliche persistence....  a calcified recalcitrance in stubborn opposition to the natural arc of genres that carries them through through emergence to maturity and then onto decay, senescence and disappearance

it suggests there's something uncanny about time, in our time

still according to Laurent Fintoni at FACT, D&B is in ruder health than it's been in many a moon, thanks to infusions of footwork and reversions to the 93-95 split-tempo, slow-bass/fast-breaks 80/160 template

some examples from the piece


s'alright... Mark Pritchard's hardly young blood though is he!


s'nice,  bit like Hidden Agenda, or J-Magik, or indeed MP's "Amenity", a year or two before the whole scene turned to shite