further to my point here about dubstep pre-2007 lacking a core...

listening again to the famous super-influential Dubstep Wars Breezeblock All-Stars session that Mary Ann Hobbs hosted in late 2006, I heard scene-godfather Hatcha utter these words about FWD>> and the genesis of dubstep over the preceding six years:

So that's September 2006. But within a year, this scene/sound that lacked a hard core had formed one; a hardcore emerged within it, a defined style, and with it came a hardcore mentality.

It's the reverse of what happens usually with music, which is that the centre doesn't hold, it fragments into substyles and fusion-izes with adjacent genres. It matures -- grows more sophisticated and refined. Gets genteel and a bit gutless, and in the process loses the massive, which is often the young audience.

But as the last five years have shown, the total opposite happened with dubstep.

Within what had hitherto been a quasi-genre, a centripetal scenius logic takes over.  A linearity assembled itself and drove the genre through half-step, into wobble, into brostep / mid-range "metalla-purge". The music got less intelligent and varied, more lumpen and monolithic. It literally regressed, going from a elders sound for 90s veterans and ex-junglists to a noise for boys.

Completely back to front from how things usually go with a genre!

Fascinating, eh! So how come?

An influx of historical ignorants, new recruits insufficently schooled in the various old skool roots of D-step?  That the DJs start to respond to, in terms of what tunes go over in the big room context at peak hour, in terms of not just their selection but their own production?

A knock-on of the anti-smoking-in-club laws, causing people to embrace pills because they couldn't get away with a sly spliff anymore?

Or is it just the visceral, debasing power of those mid-range, chainsaw, abject-slurry basslines?

Posted by SIMON REYNOLDS at 5:18 PM No comments:

Labels: FILTHSTEP, SOUNDS OF THE FUTURE, STENCHMAN, WHAT THE FUTURE HOLDS

and this is just the hardcore era, there's all the Droppin Science stuff
Posted by SIMON REYNOLDS at 10:52 AM 1 comment:

the template, sonically / vibeologically, could be this (not so much the video though)

Posted by SIMON REYNOLDS at 10:11 AM No comments:

Labels: OLD SKOOLS IN FOR EVER, RETRORAVE, SCUBA, SONZ OF A LOOP DA LOOP ERA

i see "Drug Is the Love"-songs haven't gone out of style then
Posted by SIMON REYNOLDS at 3:26 PM No comments:

what the tracks below have in common

is that they're all listed in 'Bass Canon', Spin's list of the top 30 dubstep tracks of all time

i haven't posted all of the list's tracks... and made a point of leavin gout the most not-really-dubstep-lets-be-honest inclusions (Musical Mob 'pulse x', joyO's humphrey mango,  n***gas in paris, girl unit's 'wut'), but even with the "core" ones posted below, what's  striking is precisely that they show the lack of a core to dubstep. Has there ever been a dance genre that's varied so widely in tempo, rhythmic feel, texture, mood?

in that sense like postpunk maybe, a possibility space, a permutational zone ....

of course a hard core has formed within dubstep, since 2006-7, what with the wobble>brostep trajectory, but that development drove all who refused to go along with that monolithic logic to scatter even further away from each other ... the perimeters of the possibility-zone stretched and grew ever more diffuse  =what we reluctantly call postdubstep

but even before "postdubstep", dubstep had a post-ness to it, it was post-garage, post-jungle-- it wasn't as defined or delimited as either jungle or garage were


Posted by SIMON REYNOLDS at 3:32 PM No comments:

Posted by SIMON REYNOLDS at 2:10 PM No comments:

via Bits, Nibbles & Bytes blog, a post by a dude  (Stephen Stamper) on his Unit 3: Sound Arts Project
"The roots of this project go back two years to my time on the London College of Communication’s ABC Diploma in Sound Design and Music Technology. One of my many ideas for the ABC Diploma’s final project was that of a paper instrument. During research into this idea I discovered that it was possible to use the sharp corner of a piece of paper as a crude form of combined stylus and loudspeaker: amplifying the sounds pressed into the grooves of a vinyl record.... ",,,  This led me to thinking about my formative electronic music influences, the power of the written word in the weekly music press back in the early 1990s.... I remembered a small review dating from August 1993 in the Melody Maker’s Singles column by the writer Simon Reynolds that 20 years down the line still resonates with me. His description of the Metalheads 12-inch vinyl single Angel – an ‘ardkore jungle record not easy to obtain in St. Albans: the city in Hertfordshire where I was living at the time – so fired my young imagination that I felt compelled to try and recreate this unheard record on my lowly Commodore Amiga home computer. Needless to say I failed, but if it was not for the fire that Reynolds’ small spark of a review lit within me, I very much doubt that I would be where I am today. I decided there and then in that lecture that I would take these thoughts and ideas and combine them with the concept of the paper stylus and loudspeaker.

"With this piece I wanted to expand on [David] Toop’s idea and somehow convey the power of this ‘imaginative dimension disclosed by words’ (Toop to Cascella, 2010). By holding the review in one’s hands and plunging the sharp corner into the record’s grooves, I wanted to give some impression of how I heard and, through the vibrations of the paper loudspeaker, felt the ghost of the music within Reynolds’ words."

here' s the seed-review in question 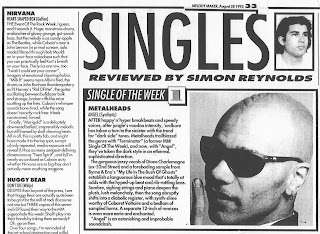 
well i think these oldsters are pretty cool actually, some of their attempts to dance appropriately are surprisingly suitable

and their suggested names for the as-yet-unidentifed-to-them genre are quite inventive -- "metalla-purge", love it!
Posted by SIMON REYNOLDS at 5:29 PM No comments:

Labels: ELDERS REACT TO DUBSTEP SKRILLEX, METALLPURGE
oi! mate! give us back me binary opposition when yer done wiv it, will yer?

"Fifteen years ago that kind of dubstep would have been called IDM (intelligent dance music), a label with a dismissal built into it: Music made for physical release, for dancing rather than chin-stroking, is assumed to be stupid. And EDM is nothing if not physical. Skrillex shows are sensorily assaultive, the bass so loud it rattles not just the stomach but the ribcage. The structural feature around which much modern EDM is built—the "drop", a series of fritzing, tempo-shifted noises that seem to stretch the surrounding music like warm molasses, often characterized in Internet slang as WUB WUB WUB —can, at sufficient decibel levels, scramble the synapses of even the most sober audience member.

"The "drop" has become an indicator of crass vulgarity, both in the sense of being commercially popular and in the sense of being something for the unwashed masses. The class connotations of this criticism are both inescapable and depressingly familiar: The early criticisms of jazz, rock, and hip-hop were couched in precisely the same terms—crass, vulgar, commercial, populist—by self-appointed arbiters of taste. Today, the drifting or blissful or spiky pleasures of don't-call-it-IDM are designed to appeal to the same graduate students, media industry professionals, and cultivated music junkies who champion indie rock or modern classical. Meanwhile, EDM's forcefulness and emphasis on movement is pitched at a broader audience more interested in using music as an aid to dancing (or, when rhythm is taken away, to losing their shit) than in analyzing it."
this here Bogart dude's talking about yobstep versus nu-IDM, right... doing the classic siding-with-the-lumpen maneuvre...

hmmm, early for-those-who-know dubstep wasn't really IDM-y though, was it?  -- that's been a relatively recent development, the post-dubstep zone....   the original FWD and DMZ dubstep, that was heavy, bass-intensive, meditative-yet-physical music... skeletal and emaciated and hard...  quite a lot of it featured a drop, or equivalent Pavovlian trigger-for-the-massive


the real shift to the nu-style, the brostep sound, was when the bass-riffs shifted upwards from sub-dub to mid-frequency shred-zone, and that particular editing and programming software (Massive, right?) came in leading to all those mechanistic-yet-abject, baroquely-contorted and twisted, hard-angled basslines

"Stupidity can be a virtue, especially in pop. Think of the brazen, visceral dumbness in a garage-rock classic like "Louie Louie," or in the entire catalog of the Ramones. The critic and musician Norman Brannon recently noted that the new EDM populists play short sets of two hours or less, as opposed to traditional electronic DJs, whose sets could stretch to 26 hours or longer in extended cycles of build, peak, release, ebb, and build again. "Could anyone listen to 26 hours of Skrillex? Would that even be mentally possible?" he wondered, which is a bit like a critic in the '50s grumbling that Little Richard's go-for-the-jugular performances had less stamina than the extended explorations of John Coltrane. And again the specter of class is raised: Working people don't have 26 hours to spend at a rave."

hmmm, not sure about this m8. Raves are at the weekend, usually, which is when your typical working person makes up for the week of drudgery, and in some cases they maximise their free time by taking sleep-defying drugs. And raves are nothing but the same sound over and over and over again, up to and beyond the point of satiety.  True, the DJs get shorter sets than in your club residency, which encourages them to be even more wham-bam, anthem / drop / high-impact tune than they would be otherwise, to avoid being blown off stage by the next DJ. But the reason they have short sets in the first place is that promoters are trying to cram as many big-name pull-the-crowd DJs onto their bills as they possibly.  But all those deejays (certainly in your classic 90s hardcore raves) would be playing much the same kind of music, indeed many of the exact same anthems. And i suspect it's much the same with today's, cough, EDM -- so that effectively people are willingly experiencing 26 hours of Skrillexy type music, a continuous blast of sensation. And i also suspect -- as it was in the 90s -- that the drugs are helping them to withstand that onslaught and enjoy the battery of homogeneity, the changeless same.
Posted by SIMON REYNOLDS at 4:35 PM 1 comment:


those tunes (via SWAG) are pretty old

Posted by SIMON REYNOLDS at 11:10 AM No comments: