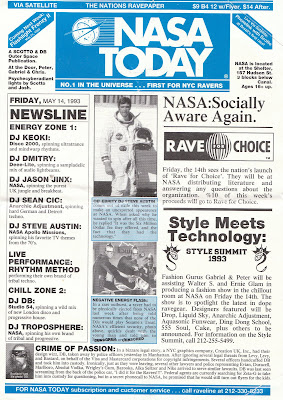 Posted by SIMON REYNOLDS at 7:51 AM No comments:

This double debut arrives clad in a back story that gives off a pungent whiff of "fishy". Supposedly, Unknown's two 12 inches are the first issues from a monster cache of 1991-1994 vintage, never-before-released ardkore rave. At a rendezvous on Sowerby Bridge in Yorkshire earlier this year, a mystery man handed over "a carload full of dubplates and DAT tapes" from producers who wish to remain anonymous. The tall-seeming tale recalls the intrigue about that lost classic of Italodisco by Black Devil that Rephlex put out a few years back, which some alleged was really by Richard James and/or Luke Vibert (the latter of course put out his own faux-jungle EPs as, snigger, Amen Andrews). "Darkcore," the A-side of hate001, has the classic period signifiers down pat--mashed and smearily processed Amen breaks, reedy twilight-zone synths, tingle-triggering Morse Code riff. But there's something off about this track, from its disconcerting plinks of treated percussion to the peculiarly static and suspended quality of the groove, which you can't imagine mashing up any real ravefloor of the era. On the flipside "Injustice," two distinct rhythm tracks are placed in adjacence but never gell: a slow, ponderous beat (either proto-dubstep or post-dubstep, depending on whether this is the genuine article or a period pastiche) and a juddering, fever-dream groove redolent of 1993 classics like Potential Bad Boy's "Work the Box". Wisps of sick noise snake up from the depths of the mix, but the overall feel is dislocated and remote, like a faded memory, creating an atmosphere closer to the elegaic mirages spun by Burial or V/vm's "The Death of Rave". The second slab o' vinyl "Pretty Boys Don't Survive Up North" is more convincing: the jarringly off-kilter pattern of metallic snares is a dead ringer for Boogie Times Tribe's "The Dark Stranger" while the "gfuta mix" (done this year) makes the groove even more jagged while intensifying the Mentasm-synth until it's a writhing, maggoty cloud of malevolent sound hovering overhead. In the end, it doesn't really matter if this is a homage or a real-deal relic: these tunes are ruff enough to transport this aging raver right back there like a regular time machine.
Posted by SIMON REYNOLDS at 8:08 AM 1 comment: