what a pretty pop star he made

"it givin' me a pure meditation"

every year, two or three times I'll hear a new rap song on the radio that samples the hollering-into-an-echo-chamber bit at the start of  "Buffalo Gals'

it's one of the most widely sampled sounds in pop history - an actual talisman and touchstone in hip hop, which is pretty remarkable given that Malcolm McLaren he got no rhythm (at least according to Trevor Horn, who says he had to tap on Malcy's chest to keep him in time during the do-si-doh with ya pardner "rapping" on "Buffalo Gals")

here's a hardcore rave example I just stumbled on

there must be scores more, in many many genres

here's a favorite occurrence, i guess notionally also in jungle (an influence on this album)

i could cheat and go and look at whosampled, but i'd rather see what my memory dredges up - and what parishioners proffer...

appears in this Sublime song

one of the great surprises of moving to LA is discovering that I really like Sublime (when they first came out, I couldn't stand them - but that was when I was living in New York and as disconnected from radio as everyday listening as I've ever been - and there is just something about Sublime's singles, the gait of them, that fits the geography and the weather of Southern California).

the future is half a century old

RIP Gershon Kingsley, who reached the ripe old age of 97

interesting, isn't it, that the Future would emerge first under the sign of easy listening - and even kitsch?


Didn't realise that Jean-Michel Jarre did a version

Makes sense cos "Equinoxe 4" always felt like a semi-rewrite - not literally, but the vibe 'n ' feel, albeit more sedate, less boppy-bouncy


another of the many 'Popcorn' covers

Inane in the Membrane


stop press: some suggestions from Ian S in comments

Posted by SIMON REYNOLDS at 1:14 PM No comments:

George, as in Kelly, as in Sacred, as in Creator of the Greatest Jungle Tekno Song of All and Ever Time

Eyes rolling back in the head bizniz

"Call me a star watch me shine" - almost faint at that bit.

Well, I did not know this, but fancy that -  George Kelly was the promoter of Thunder & Joy - one of my favorite jungle clubs, right in the middle of London, mere steps away from Centrepoint -

"Thunder and joy" always struck me as vaguely Baptist or Pentecostal in vibe, or redolent of the "shocks of mighty" idea in rootsifarian reggae.

George put out quite a few other Sacred tracks ("Call Da Cops" was good, nothing quite reaches the heights of "Do It Together" though) and he had  a bunch of alter-egos:

One of these days I'll have to do the full auteur-y trawl through them.

GK also ran the Grand Larceny label (who had School of Hard Knocks among others) which spun off Paragon Recordings (which had Skyjoose -  who later went dark-garage as Skycap of "Endorphins" renown).

A solid pedigree, a significant contribution, a well-nummy throughline ...

But from where I sit, just based on Thunder & Joy, and that one towering colossal record "Do It Together", you'd have to say that George Kelly was a world-historical figure

Where is he now?

Labels: DO IT TOGETHER, HARDCORE CONTINUUM, JUNGLE TECHNO, LONDON MASSIVE, SACRED, THE GODHEAD OF GEORGE KELLY 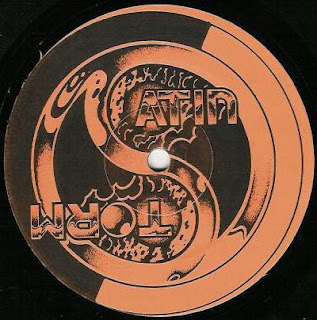 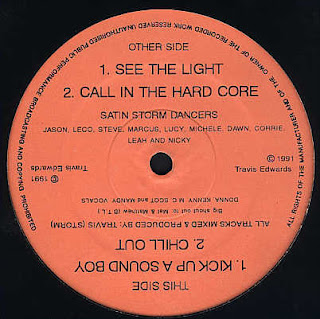 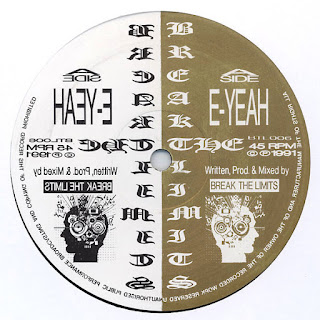 The uuurv requires a proper inventory, but for now, tips welcomed.
Posted by SIMON REYNOLDS at 11:53 AM 12 comments:

"give you a musical crisp biscuit you can't digest" i scream you scream we all scream

one of the first big batch of house tunes i picked up  - in NYC, a time where a dance record store might have hip hop all up one wall and house all up the other

loved the distraught male vocals, and the duetting discarded lovers of the cold-hearted Donnie  - "yeah man, she ain't even give me the chance to give her what i wanted to give her!!!!"

later sampled in this

young Sadmanbarty has a whole theory about these sprite-like goblin-voiced dancehall singers, to do with digital technology and identity-morphing and transhumanity - the schizo-Gothic proliferation of personae and mask-selves.

i always finds these tunes insanely compelling the first time i listen but for some reason (same goes for Vybz, for Popcaan, for Alkaline) i don't go back to them - whereas the autotuned Afrobeat or mumble rap is much more repeat-listenable... perhaps it's just because the dancehall stuff is so full on, always going for the listener's jugular, the personality-level volume-knob's always pitched to 11

also find the beats in today's dancehall often seem to have a curiously muffled quality, so glossed up and digi-sheened and hi-def huge in girth, it's like there's a blanket of dazzle smothering them
Posted by SIMON REYNOLDS at 1:08 PM No comments: