What current music do you listen to?

"Just Italian rave really. It's got a lot of guts to it. Visnadi and stuff.. "

Posted by SIMON REYNOLDS at 10:29 AM No comments:

new slammige from the We Buy Gold kru

Posted by SIMON REYNOLDS at 9:12 AM No comments:

whereas this track (also from the brand new Uncountable Set EP) is more typical KRCW fare i.e. a tad too tasteful for my taste

somewhere in that kosmigroove meets digimax that encompasses Low End Theory, but even more disintegrated and untethered  - not so much fusion as diffusion

Posted by SIMON REYNOLDS at 8:03 AM No comments:

taking drugs to make music to take drugs to

i have only one of these - can you guess which?

shimon on you crazy diamond

the missing link between Nebula II and Photek

proper jungle techno with equal emphasis on the techno

getting a bit clinical but still pounding and pummelling quite fiercely

then the heavy metal years began in earnest


Posted by SIMON REYNOLDS at 9:09 PM No comments:

the dream of the Nineties is alive in Kreuzberg

When I was in Berlin last month, I had lunch with a friend in Kreuzberg. As we prepared to part, she mentioned that a certain iconic record store was only five minutes walk away.

I had a few hours to kill, so - feeling oddly suggestible and passive - I let myself be steered. I'm one of those whose head empties seconds after someone gives them street directions, but my feet nonetheless carried me along and sure enough I soon enough found myself peering into a faintly familiar courtyard. 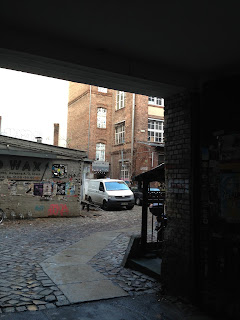 I walked across, through the door, up the stairs... 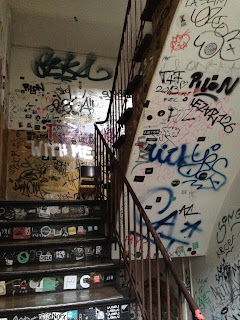 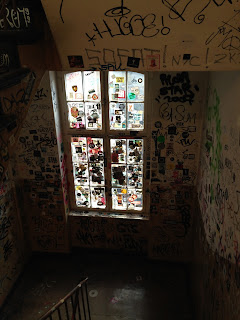 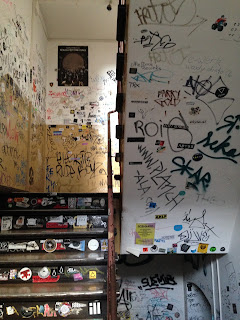 Came to the door, which was barely marked ("if you don't know, you don't need to know" seemed to be the deal here). 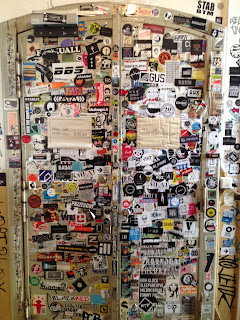 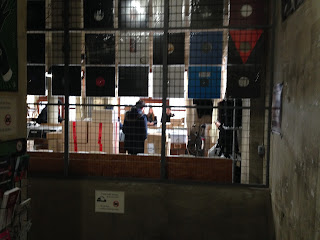 The first time I went to Hard Wax  - as I expect you know,  affiliated to Basic Channel / Chain Reaction and the mastering studio Dubplates & Mastering  - was in 1998.

What struck me instantly upon entering it again was how little it had changed in the intervening very-nearly-twenty years. 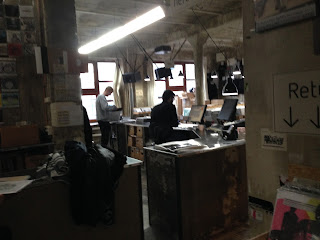 The clientele looked much the same -  in appearance (beards, backpacks, practical looking clothes), in expression (absorbed, intent), and in composition (nearly all blokes, a couple of women).

The austere store layout was the same as I remembered, more or less.

Vinyl, vinyl everywhere - including on the walls (one of which is dedicated to dancehall 7-inches). Not a compact disc in sight. 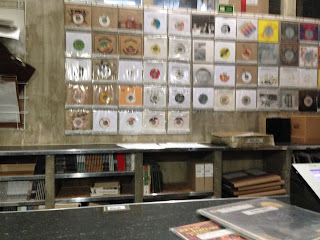 The only thing different was me.

It was an odd sensation, entering a record store in a desireless state.

So I decided to let myself be guided by the store's own recommendations, as stickered onto the see-through plastic bags that protectively encase each and every 12 inch. 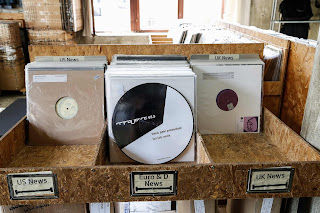 Scooping up an armful of releases  from the new releases section - disparate genres, choosing tracks based on how effusive the store clerk commentaries were - I headed over to the listening decks. 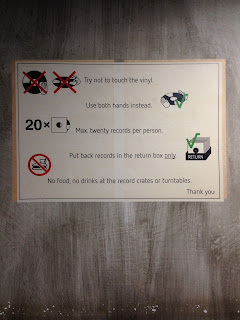 Also forbidden: taking pictures without asking permission, but fuck that.

Muscle memory took over as I unsleeved the discs, eased them onto the slipmat, and nimbly stylus-skipped through the tracks with the tone arm cradled in the  crook of my index finger:  listening to 20-second snatches at various intervals through a tune's span, just like the old days when I was forever frantically sifting through a big batch of brand-new output across as many zones and fields as I could manage.

But now there was no sense of urgency, none of that internal pressure that drove me to keep up and keep track. Just idle curiosity.

I felt a serene disinterest, in the true sense of the word - not uninterested, just with no dog in this particular race. 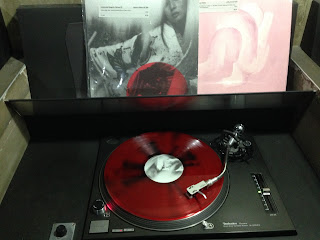 On my left, at the next turntable, stood a dread-locked, vaguely Central European-looking girl listening on headphones to one track while resleeving a Bandulu reissue she'd just finished with ("New Foundation" from '97  - and in many ways Bandulu were the original dub-techno interface, or an early manifestation of that logical progression, even before Basic Channel / Chain Reaction got there.) This girl really looked the part - in the sense of, looking like an extra from a scene set in a techno club from some late Nineties movie.

The first of my selections had grabbed my eye because of the relatively heated tone of the store description sticker, but also because it referenced early UK rave - which I'm pretty certain would have been beyond the pale here during the actual Nineties, but appears to have been gradually admitted into the Canon of Acceptable Things to Be Influenced By / Derivative Of.


Next came something more contemporary in orientation, but still with a retro tinge - a reference to a micro-era of UK techno-rave I'm partial to, as you know....

"Stepping" seemed to be a fairly frequently applied adjective on these stickers, although I wasn't sure what exactly it evoked - presumably roots reggae feel?

One surprise was that there seemed to be a fair amount of drum + bass stocked.  I'd thought that - after its mid-Nineties moment in the limelight, when it was almost universally accepted as the Leading Edge -  D + B had shunted itself down its own closed-off tunnel of a trajectory, garnering less and less attention from the larger serious-minded electronic dance community, until it might as well be metal. As it happened, to my surprise I'd recently been digging a speck or two of brand new  D + B, so I thought I would check out some of Hard Wax's recommendations.

I struggled to hear the "forward-thinking" element here - indeed it sounded like nothing so much as Source Direct in 1997. When for sure, it would have been cutting edge. Now, though, you'd have to say the edge was a bit blunt.

I said that effusiveness was the filter for my selection but there wasn't that much of it about to be honest -  a preponderance of the sales commentary involved neutral terms equivalent to "effective" or "useful". The technohead equivalent of "sessionable" in the craft ale connoisseur world, maybe;  "playable", in the sense that a DJ could spin this, it would fit the designated vibe, but equally there would be no particular reason to pick this record over a dozen others available. This kind of underwhelmed / underwhelming advocacy seemed to apply particularly to the techno releases. Like this next one, where the recommendation more or less says, "makes all the right moves" / "won't stick out".

"Detroit legacy" - the soul yawns just a bit, no?

The next one in my pile came with a less lukewarm description.


Now and then I saw the word "skudge" used adjectivally in a recommendation, which perplexed and intrigued in equal measure. But as my eye roamed across the bins, bathetic enlightenment came - rather than an inspired bit of evocative onomatopoeia, it's the name of a group and their record label, so prominent in the scheme of things it can be used as a reference for a sub-style of techno even when a release is not actually on that label.


Friends and acquaintances have been telling me for a while that the most interesting thing going on in electronic dance at the moment is the resurgence of industrial and EBM flavours.  A relatively heated endorsement of an album in that vein decided me to  give it a proper go, listening to track-portions across all sides of its double-platter vinyl incarnation.


Certainly "relentless" fits. But "dystopian" virtually guarantees a phalanx of cliches at this point.

Finally - a track that grabbed me less for the non-committal store description as for its artwork, which had an Ostalgie-style Soviet Bloc retro-look. 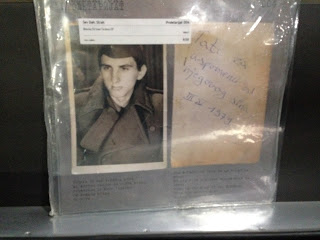 Back they all went... 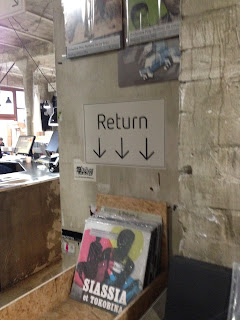 What struck me about this selection was how 1997-98 it all was...  these seemed not unlike records I could have found in Hard Wax on that first visit.

Even some of the retro flavours were starting to be detectable at the end of the Nineties. Like the rediscovery of EBM / industrial  - you had that already stirring with your Adam X's and Horrorists and Green Velvets, all of them digging back to the stiffer feel and cold doomy mood of Eighties zones that were part of  the prehistory of technorave.

Indeed that Mighty Blush release is on the label Sonic Groove, which is owned by Adam X  (although now based out of Berlin). The name descends from the Manhattan / Brooklyn hard tekno record store Sonic Groove. That's where I used to go to buy PCP, Dance Ecstasy 2001, and Cold Rush tracks, two decades ago.

20 years was once upon a time a huge gulf in pop time - the distance between Louis Jordan's "Saturday Night Fish Fry" and Sly Stone's "Thank You (Falettinme Be Mice Elf Agin)", between  Booker T & the MG's' "Green Onions" and Man Parrish's "Hip Hop Be Bop," between Led Zeppelin "Black Dog" and My Bloody Valentine's "To Here Knows When", between Heatwave's "Boogie Nights" and Adam F's "Metropolis."

But, as per Mark Fisher's "past shock" thought-experiment, if you'd taken the records I'd checked out on the Hard Wax decks in a time machine back to '98, what would surprise people you played them to would be the extent to which they weren't incomprehensible and disorienting.

It's not like there's been no fresh directions or distinctively of-our-time moves within the electronic field. There's the digital maximalist hyperphoria, there's all that Pan-style event-crammed non-dance digitronica, there's the post-step that Taninian has been theorizing over at Leaving Earth...  and a wider zone of  style-syncretic, sound-designed-to-the-hilt music that could be designated "genre non-conforming".


But those directions were barely in evidence at Hard Wax as far as I could see, perhaps because of the vinyl-only slant....

The arguably new music around seems increasingly to exist in digital form only - or even just as immaterial files, without even a CD release...

At Hard Wax, the dream of the Nineties was alive and... if not kicking (or slamming or banging) then at least stepping, steadily and slowly, onwards. As a stable tradition rather than a surging vanguard.  Where the most you expect is incremental additions to the tradition (captured in this oxymoronic Resident Advisor praise of Skudge: "they seem to always present something new - in a very faithful style"). Additions to a tradition already swollen.

I'm not knocking this, really. In all honesty I would quite happily go back to the Nineties myself. A different and more nummy Nineties, for sure.

It's that syndrome I've discussed before, the Mystery of Subcultural Persistence. Bohemian styles and alternative sensibilities linger on, long past their moment of peak salience. They become enclosures -  the subcult as cul de sac -  and gradually slip out of synch with the times. 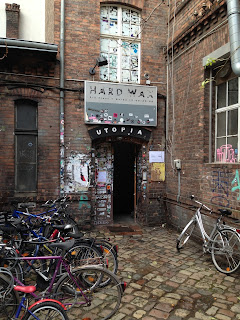 For instance, another store I passed in Kreuzberg was a punk record shop (hardcore, Oi!, ska, etc + Doc Martens + T-shirts etc)  directly opposite the legendary SO36 club, and seemingly thriving. 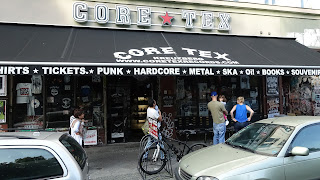 Having completed my survey of what the present had to offer (according to Hard Wax, at any rate)  I found myself inevitably  drawn to the shop's "Early Electronic" section. 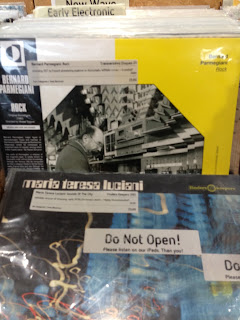 Annoyingly you weren't allowed to unsleeve and play on the decks any of these deluxe vinyl / hefty price-tag reissues. You could check them on the store's iPads (a vibe-betraying concession to the digital-now) but there weren't enough of these available. So I made a note on my phone to check them out online later...

my oozy weighs a ton


the Al Green of trap

the Markus Popp of pop

not rated by those who know of course


a remake but an exact one


Posted by SIMON REYNOLDS at 12:04 PM No comments: