(via the mighty Woebot)
Posted by SIMON REYNOLDS at 12:41 PM No comments:

Posted by SIMON REYNOLDS at 9:25 AM No comments:

My feeds are convulsed with mourning the like of which has not been seen since Bowie.

Some tunes from that long Moment of convergence with the zeitgeist Weatherall had at the start of the 90s.


The most famous coordinates for that Moment are these obviously


More tunes from the long moment of indie-dance and baggydelica

After the Moment, Weatherall had a long, productive, varied career, increasingly not remixing or re-producing other people's music, but making his own, with various partners. \

A bit later came another significant intervention - one that was not so much in tune with the zeitgeist (or retro-zeitgeist) as slightly premature and therefore clairvoyant: 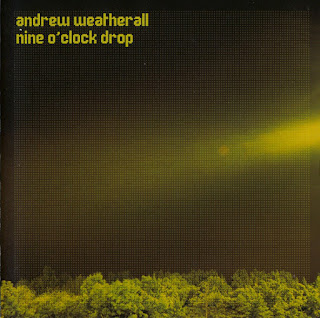 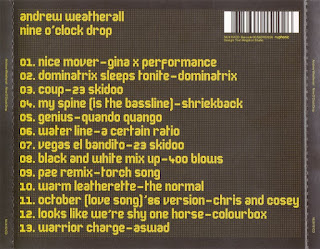 That came out in 2000 and was thus very early in terms of the postpunk revival. I seem to recall the contents and the title were inspired by memories of the Hacienda in the 1980s - a reference to what time you would drop the acid, i.e. 9 pm, for it to kick with peak effectiveness timed to the peak hour of dancing (that peak occurring quite a bit earlier in those days because most clubs would only be open until 2-AM - this is well before the big loosening up of club hours in the early 90s which allowed for all-night rave-style clubbing.).

1999 was when I first thinking back to postpunk, actually digging out the early Scritti records and things like that - so it's interesting that at our remote distance we were going through the same "back to my roots" reckoning with earlier self syndrome. Well, as I said, we were almost exactly the same age.

"send another pager London come on"
Posted by SIMON REYNOLDS at 3:43 PM 3 comments:

"that's from the hardcore brothers - switch yer mobile on"

Posted by SIMON REYNOLDS at 10:47 AM No comments:

new blogs with a focus on electronic music and dance culture

New blog of note #1 - The Priapean Logs. Started by Dissensus contributor Sadmanbarty, a young fellow with a bulging sackload of ideas about 21st Century music.  (And earlier music too - he's a drummer by trade, knows the intricacies of rhythm). Check out these posts on the Haze as an analogue-era production aesthetic now replaced by something sharper and frostier, and on Wu Tang Clan's Forever.

New(-ish) blog of note #2 - Aloysius. Started by Dissensus contributor Mvuent, from Minneapolis. Check out this post on "reaching the far lands as an aesthetic goal" for experimental music. Never having played Minecraft and only barely glimpsed it, the concept of "the far lands" goes over my head. But my son - who practically lived inside the game for a few years in his mid-teens - says it's spot on.
Posted by SIMON REYNOLDS at 9:32 PM No comments: