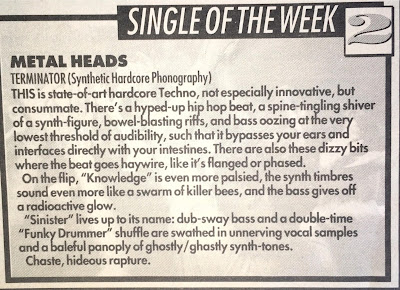 January 30 1993 - and I made "Terminator" one of the singles of the week - the first time Metalheads / Goldie get single of the week, but not the last time...
What leaps out now is that assessment "not especially innovative" which is of course dead wrong, but I was still getting to grips with the scene / sound, had yet to formulate the concept of rhythmic psychedelia (copyright me, yes that's right me) (Still I can't complain about "sampling" really can I now, since "chaste, hideous rapture" is stolen from Lautreamont and was probably the fourth - and far from last time -  I borrowed the phrase.)
Also notable about this singles column is the rave review for Satin Storm, which I believe I've mistitled (based on what was scrawled on the white label  I bought) and is better known now as "Think I'm Going Out of My Head" 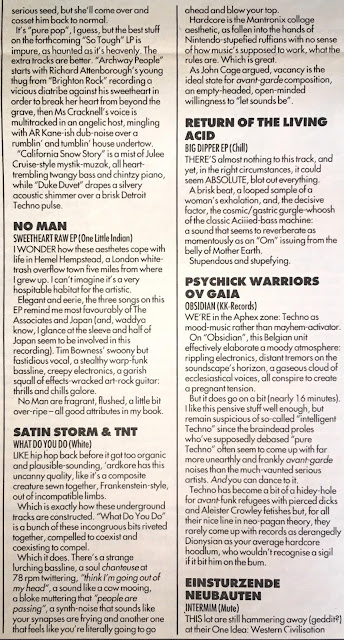 I wish I had made Satin Storm single of the week instead of The Drum Club tune which is not that great - certainly not as good as their previous 'U Make Me Feel So Good". And then Metalheads score again in August of '93 with "Angel" - and this time we have a picture of Goldie. It's even worse than the photo of me I think! That strange perpendicular finger... 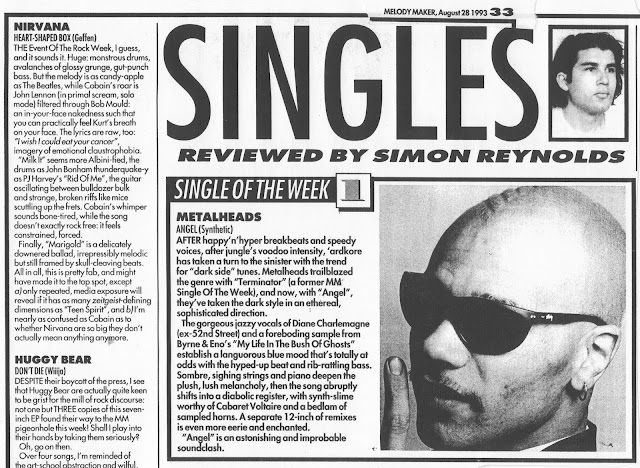 Also notable about this August '93 column - see below -  I make Foul Play "Open Your Mind (Foul Play Remix") Single of the Week (or rather, say I would have, but we didn't have a photo of the group. Not that this stopped us with "Terminator", mind) . 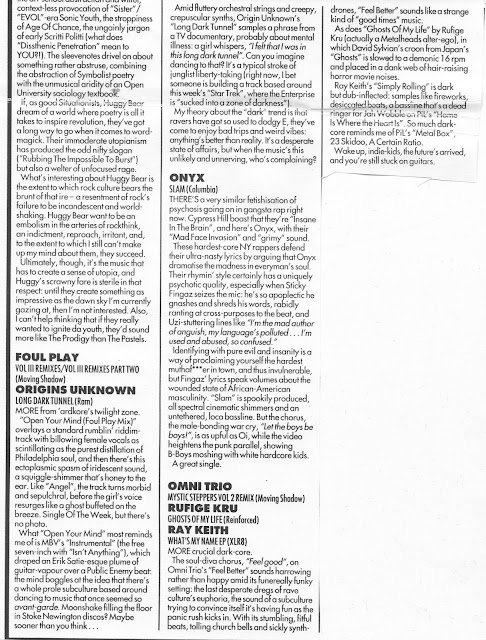 Origin Unknown "Long Dark Tunnel" - better known as "Valley of Shadows" - is reviewed off of hearing it on pirate radio. (Or was it on a CD compilation? I don't think so). I'm not sure how I knew the name of the label, but I know I didn't own the vinyl at that point - bought it much, much later. Also worthy of Single of the Week status.

Aha - and then there's reviews for Omni Trio (yet another SOTW contender surely) while Goldie gets another review with the Rufige Cru "Ghosts". Well now I wish I had made that the second single of the week (or third, or fourth, or fifth)  and mentioned the remix of "Terminator" - "Terminator 2".

Ray Keith is misattributed as the author of the Wot's My Code tune rather than remixer  - easy mistake to make as his name was massive on the front record sleeve. 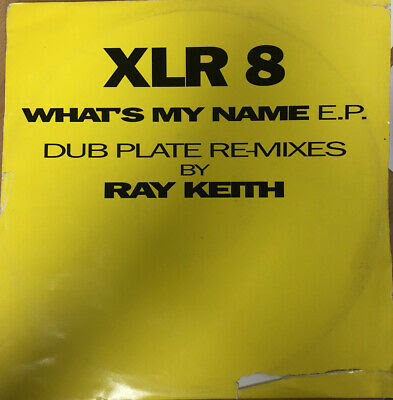 Also this large claim on the label kinda invites confusion 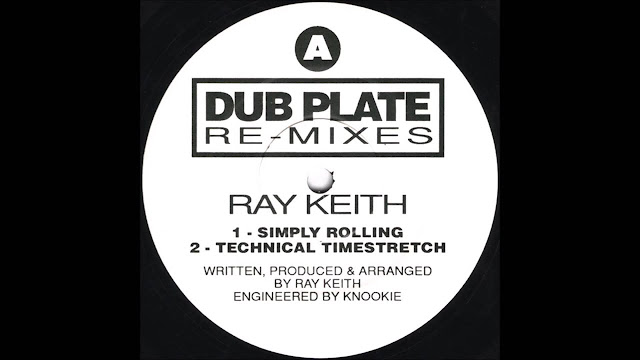 Who's this Knookie chappie then?

Posted by SIMON REYNOLDS at 10:18 AM No comments:

"Clock-torquing has always been central to rap music, with DJs and producers perpetually tweaking the speeds of their samples, treating time like gobs of Silly Putty. Houston’s DJ Screw changed the trajectory of rap by famously slowing records down, loosening the tempo until it melted into a beautiful ooze — so it makes sense that a fast remix does something like the opposite. Instead of liquefying, the details crystallize. The beats become light and delicate. The rhymes get tight and Smurfy. Give a fast remix your most undivided attention and it’ll start to sound like a double-refusal of temporality and corporeality — a sort of metaphysical protest music."

although hearing them I think he kind of oversells a bit...

Some examples he cites:

Posted by SIMON REYNOLDS at 11:56 AM No comments: 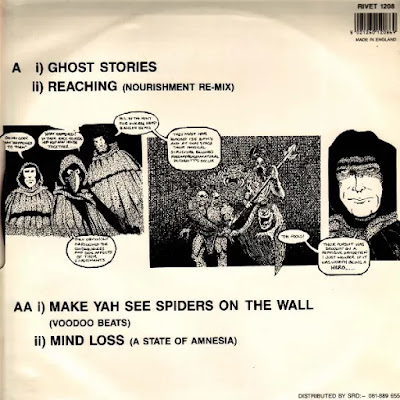 Looking at the 4 Hero early EP The Head Hunter, with its back cover cartoon of the group as malformed beings grotesquely mutated owing to their experimentation with speeding up the bpm... 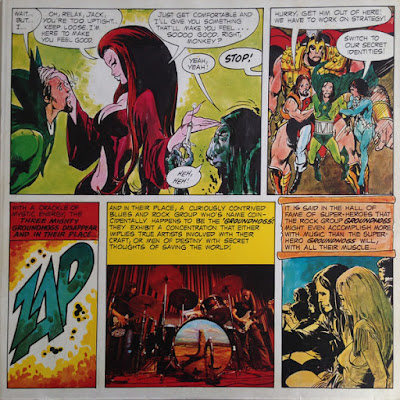 But there must be many other examples of musicians becoming comic-strip characters or animations.

Well, there's the animated sequences in The Great Rock'n'Roll Swindle - a ruse around the non-participation of Johnny Rotten in the movie, the virtual nonparticipation of Vicious, and lack of documentary footage of certain key episodes 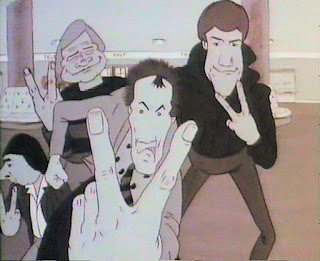 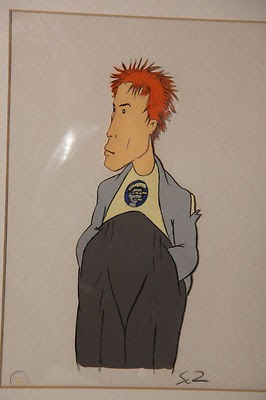 And here's that whole cartoon sequence from tGRnRS 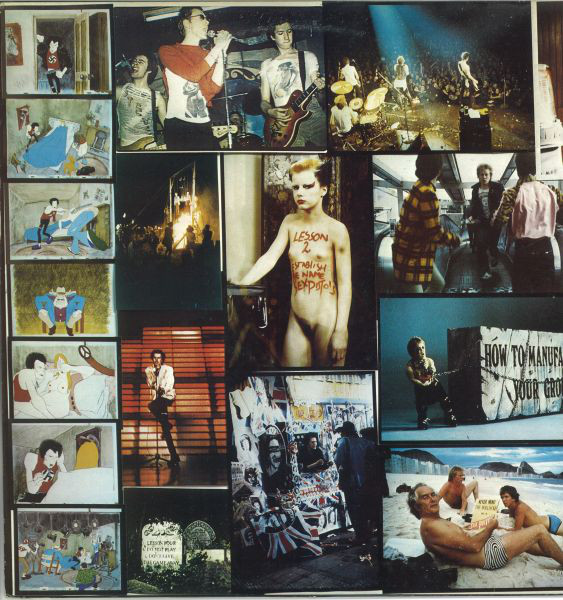 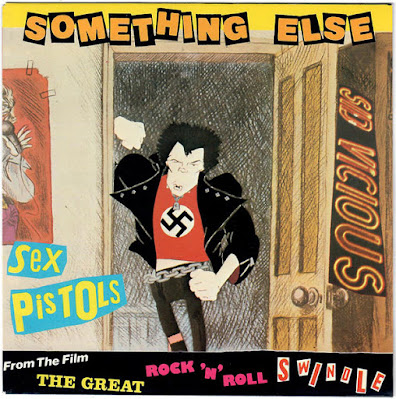 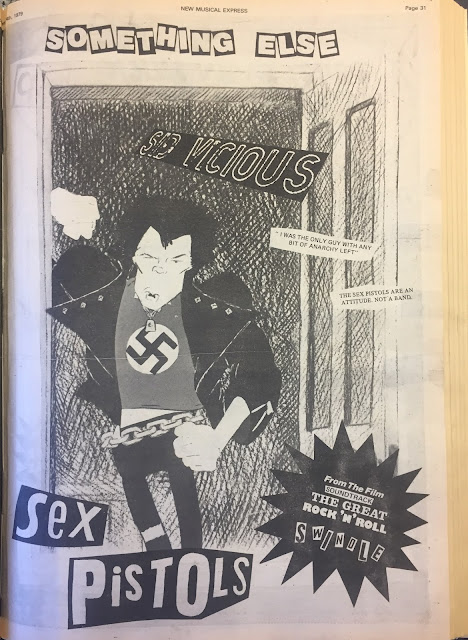 the fantastical things that Canby done with electronic sound

Reading the liner note essay in an old Tod Dockstader CD reissue, I came across this chap Edward Tatnall Canby - among many other things, an early proponent of electronic music. 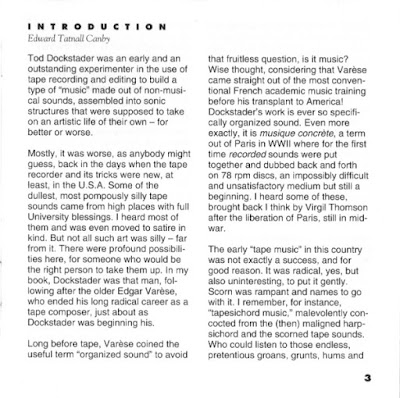 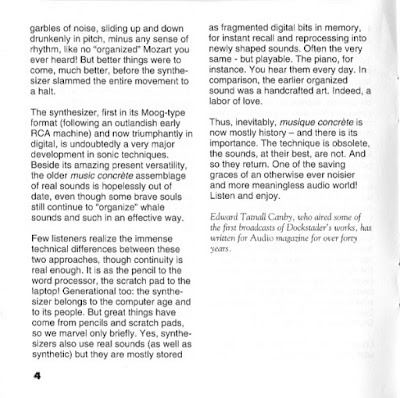 Dockstader was one of the composers Canby played on his show for the public radio station WYNC.

Here below are archived shows from the 1960s in which Canby genially guided listeners into the alien world of musique concrete and electronic music.

Apparently Canby also played, during these shows, some of his own experiments with electronic music - now that's something I'd like to hear.

Canby was also an audiophile and hi-fidelity expert. And he wrote a book about the history of electricity. 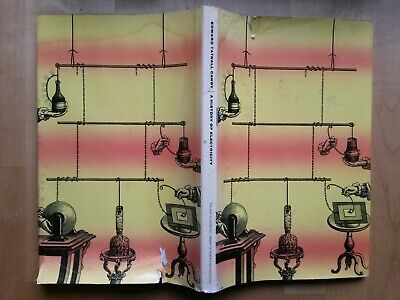 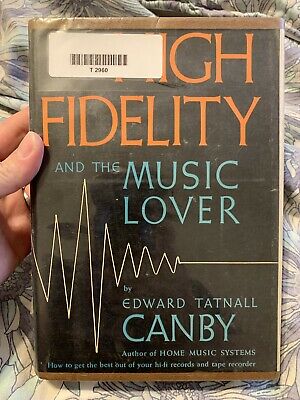 Posted by SIMON REYNOLDS at 1:32 PM No comments:

The Resurrection of Todd

"If there’s one moment of telepathic audience communication almost every Todd devotee can picture with their eyes closed, it’s this: simply utter the words ‘Jesus Loves UK Garage’, and a rippling harp ushers in the dream sequence.

"It’s New Year’s Day 2003. On the fringes of East London, history is being made. A full decade into his career, Todd Edwards is stepping up for his first club DJ set. The venue is Romford’s  Time & Envy, the night is DJ EZ’s 4by4, and the jet-lagged Jersey boy is sweating with anticipation in a homemade black T-shirt proclaiming Christ’s affection for UKG...

"EZ slots his records away as Matt ‘Jam’ Lamont and Karl ‘Tuff Enuff’ Brown beam from the booth’s back wall. Todd is summoned and cues up a custom dubplate cut for the night. Around 1,200 tightly-packed fans surge forward to the sound of — wait, is that The Carpenters? Todd stands, eager but flummoxed, as people begin to cheer and shuffle to the muted intro for 45 seconds or so. Then the tune kicks in, and the venue goes absolutely doolally.

" [Todd recalls]'... They cheered every song, including that preposterous intro, which was intended to show the crowd how my samples worked. I learned so much that night: the interaction between the DJ and the crowd was like nothing I’d experienced in New York. The MC was saying things and the crowd chanting back — as an American, it just sounded like a pep rally.'”

"During his set, this innocence resulted in one amusing misunderstanding. As the crowd demands a rewind, Todd flashes a confused glance back to the MC. Unsure what was being requested, he whiffs at the chance of a thunderous reload, instead merely hitting the stop button and watching the turntable power down. He grimaces at the mention. "Tuff Jam always joke about that.”

Watch the magic and the mishap here https://youtu.be/1UxY5LonBIc  - or below

Less cheerfully, there's a lot about Todd losing his way, bad management, financial struggles - and failure to capitalize on a later resurgence off the back of Random Access Memories

"A 2006 love letter to God that slipped through the cracks, ‘Odyssey’ has gathered something amounting to cult classic status amongst in-the-know heads. The album shows a different side to Todd — multiple different sides, in fact, as each track features a different vocal impression. Todd huffed helium to sound like Björk and crooned like Michael McDonald for maximum yacht-pleasing effect. The production is crystalline and the lyrics have an unresolved melancholy to them, seeking salvation in song. As an artistic statement, there’s no real point of comparison anywhere in Todd’s oeuvre."
Hear it here or below
"Todd has been chipping away at an improved version of ‘Odyssey’ for close to a decade, and come 2022, there will be an accompanying (re)making-of documentary by filmmaker Billie JD Porter. The new version is, Porter says, “basically a different album by this point. It’s a fresh, loud take on the original. Old school Todd fans are going to be overjoyed when this record hits.”
And here is Todd talking about spirituality, UKG etc at a Red Bull Music Academy event:
Posted by SIMON REYNOLDS at 5:01 PM No comments: 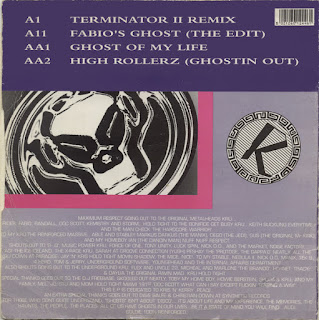 Posted by SIMON REYNOLDS at 1:38 PM No comments:

WHY DO THEY WANNA SOUND GRYMEY 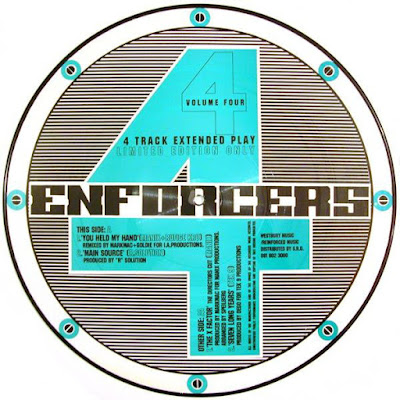 listening to this talisman touchstone of an EP again, noticed at Discogs that inscribed into the vinyl there is an early sighting of the word / concept "grimy"
(Onyx were also using the term around this time on the other side of the pond)
I don't know if I'd call the sound on Enforcers 4 "grimy" though - if anything it's reaching for a kind of psychotic slickness
the beats and the bass on the flipside tracks blew my mind then, and still now
Posted by SIMON REYNOLDS at 11:38 AM No comments:

"On July 1st 2021 my good friend Vali NME Click is dropping the pre-orders for the epic 'Message from the Parazone' on @parallaxrecordings, a monster four disc album featuring the best and brightest artists from the modern breakbeat hardcore / jungle scene. To celebrate this momentous event, Vali asked me to put together a retrospective of the label so far, so I've come up with this mix, which picks out at least one track from each of the releases so far, covering both the old skool re-releases as well as the new skool exclusives. Enjoy!"

taste for the compilation:

"Eyes to the horizon...it´s getting closer! This is the 12" sampler that will advance the 4x12" 'Message To The Parazone' album to celebrate the 5th birthday and 10th release of Parallax Recordings.

"The 4-tracker gives an insight into what to expect from the album and offers a wide range of styles: It opens with the dark and mystic 170-groover 'Horizons' by ScanOne. It´s followed by the raw, dubby, Amen-led Dead Man´s Chest Remix of 'Rhodiola'. Originally part of the Subaquatic EP by Tim Reaper it was a collabo with dutch Yorobi and is turning heads in various sets at the moment. On the flip InnerCore slaps us with 'Turbo Sound', an alarming ravey Hardcore beast that will make you jump off your seat and bust shapes in your bedroom. The dark lord FX rounds off the EP in his trademark dark style that only he can do so easily. 'Dark Shadows' is a pitch-black monster with racing, relentless Amens and the evilest mentasms. You don´t want to miss this. "

Posted by SIMON REYNOLDS at 4:25 PM No comments: