"Some of this is due to TikTok, where artists like the young British vocalist PinkPantheress — who sampled Adam F’s drum-and-bass classic “Circles” for her viral hit “Break It Off” — and piri, whose sprightly, slinky liquid D&B single “soft spot” has now passed 12 million Spotify plays, got their first boosts."

But DJs are playing it out in the clubs too apparently.

"The surge is worldwide — from Indonesia to Australia — but the U.S. has been particularly voracious for drum and bass."

“I’ve just been on a film shoot, and somebody said, ‘My dad played me this music", proving, sez Mr Rufige, that that D+B is now “the new Motown.”

vocal lick from this Candi treat

the lickable bit appears in many other nuumy tunes

classic obviously
Altern-8 tune also featuring eerie cavernous voice from Nitro Deluxe obscurity "On A Mission"
Gang Related / Mask is a killer that I either missed at the time - or got and then forgot....
Pingy-delic bass + dense contorted breakage + delish triggered-Candi voco-science
Connection tune woven almost entirely out of familiar already used licks breaks and samples but curiously - and this is characteristic nuum magic at work - is no less compelling or time's-passage-defying fresh  for all the apparent redundancy
magic of Nuum = telling a different story with the same materials and ingredients, aka the changing same, aka Black music
E-Motion indeed
clearly sugarholics, Noise Overload also confected this supasweet spin on heaven-scented lovers rock swooner "Silly Games" by Ms. Janet Kay

Posted by SIMON REYNOLDS at 9:42 AM No comments:

ah well it's on Planet Phuture - which is  Marc Acardipane's label, largely set up for reissues of vintage Mover et al material

Cuften appears to be the only youngblood on the roster (along with the ton of Acardipane there's also a greatest werks from Miro - two of them actually, Unforgotten Season S1 and S2).

Posted by SIMON REYNOLDS at 10:04 PM No comments:

the caveman beat (what we're going do right here is go back, way back)

Posted by SIMON REYNOLDS at 9:53 AM No comments:

Some years ago I posted here about Derek Bailey's jungle CD with DJ Ninj - Guitar, Drums n Bass, from 1996 - and how it was a bit underwhelming, not because of DB's contributions to the fray, but really the other chap (not exactly the junglistic equivalent of Bennink or Bailey himself for that matter)

What was really exciting about the whole surprise of "DB into jungle!" thing was that Bailey had  discovered jungle by accident, just through stumbling on the pirates while scrolling down the radio dial, and there was the mind blowing revelation that he liked to jam with the ruff 'n' rugged choppage coming out the speakers.

Well, someone's only gone and found a cassette of him doing exactly that! And they've put it out (at a name-yer-price rate). Hat tip to Jon Dale for alerting to me this archival gem - wittily titled Domestic Jungle. 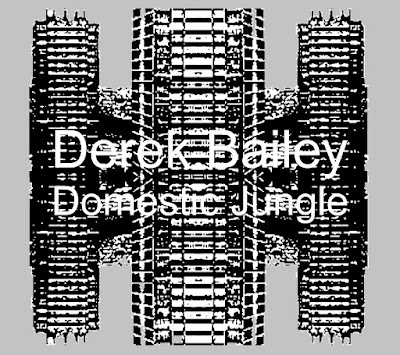 Here's the Scatter Archive release rationale from Bandcamp, which starts with the same Stefan Jaworzyn interview transcript that I used in my blogpost :

"The station's not there now - usually they've started by 5.30... They've no announcements - when they go off it just stops, when they come on it just blasts in... It's enormously loud - I get it accidentally sometimes when I'm just fucking about.

"So I've been listening to it, and I really like the way they do it on the radio - I have to say that in recent times it seems to have got softer, a lot less abrasive in some ways. There are more vocal samples, for example... But what I like about the radio is the live quality - although the stuff is records, they don't leave them alone - they'll talk over them, advertise gigs, order a pizza - the music's constant but with interruptions. It's very live - and with that sustained pace, which of course is inhuman... And it's nice to play along with, particularly as opposed to free jazz situations where the pace is often very slow.

"I've found it fantastic to practice with. So for a long time I've been doing that...

:I've always liked the parts where the music stops and drifts along - you get some ridiculous string orchestra, then it just slips a bit, the pitch goes or they slow it down or something. Then the drums come back - it's completely meaningless! I like that...

"What is a pain and can sometimes dilute it is the repetitive - looped or sampled - vocals... The funny thing is, I've never heard a jungle record, all I've heard has been off the radio..." Derek Bailey [talking to Stefan Jaworzyn]

except for tracks 08 and 09, which were originally released on David Toop's compilation "Guitars on Mars" [1997], the collection here comes from two different tapes and the sound quality is [inevitably] wildly variable, but does allow a fascinating and valuable historical insight into a particular period of Derek's domestic practice routine

with thanks to Karen Brookman, David Toop and Stefan Jaworzyn

How funny that Bailey doesn't care for the ambient jungle / artcore drift into musicality - "I have to say that in recent times it seems to have got softer, a lot less abrasive in some ways. There are more vocal samples, for example... What is a pain and can sometimes dilute it is the repetitive - looped or sampled - vocals".

He prefers it ruff and rugged.

Posted by SIMON REYNOLDS at 2:30 PM No comments:

Heard this for the first time in decades - what a great sashaying groove! And  Al making some marvelous moans and whoops!

(But then again the Bible can get pretty raunchy. And how about the wedding vows from the Church of England's Book of Common Prayer  - "with my body I thee worship".)

On the 1975 album that "Love Ritual" first appeared on, there's a track titled "The Love Sermon"!

On the four-CD Al Green box set, there's a remix of "Love Ritual" - which seems to have come out as a single in 1989, where it was given this title (the Bwana subsequently stripped away).

"I talk in tongues, mama / oh when I love you" - Buckley working that sacralized sex / religion-as-sex-as-religion zone as deliriously as Reverend-to-be Al.

Those Buckley tunes precede the recording of "Love Ritual" by two or three years. Yet Al Green likely had been among the stuff Tim listened to and learned from for Greetings from LA, his big would-be mainstream R&B/soul/funk move (that didn't pan out commercially - too X-Rated? still too out-there vocally?) .

(I played these to my students in a class on vocal extremes, thinking they'd be blown away - but the  reaction was surprising - it sounded grating to their ears, like Buckley was straining his vocal cords - "he doesn't  have the right vocal support for that kind of singing" i.e. he ought've hauled his ass over to  a voice coach.

More from me on the genius of Tim Buckley

Posted by SIMON REYNOLDS at 11:45 AM No comments:

I knew I recognised that splashy, reverb-wavered snare sound!

The Eno touch no doubt

Beat from Another World

also
Posted by SIMON REYNOLDS at 12:41 PM No comments:

King of the Ravers / drop the B-Bomb 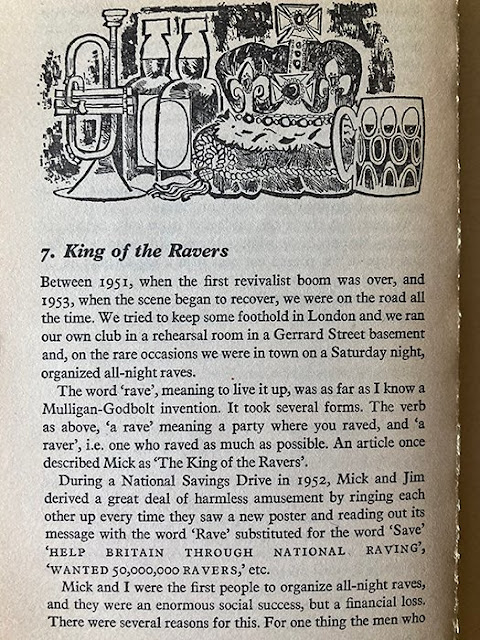 from Owning Up by George Melly

via Another Nickel in the Machine:

"In his autobiography Owning Up Melly described the end of a typical rave: “At seven a.m. the band played its final number and we’d all crawl up out of the sweat-scented cellar into the empty streets of a Sunday morning in the West End. Hysterical with lack of sleep, accompanied by a plump art student, her pale cheeks smeared with the night’s mascara, I’d catch the Chelsea bus and try to read the Observer through prickling red eyeballs as we swayed along Piccadilly, down Sloane Street, and into the King’s Road. Then a bath, one of those delirious fucks that only happen on the edge of complete fatigue, and a long sleep until it was time to get up and face the journey to Cook’s Ferry or whatever jazz club we were playing that evening.”

All all-night ravers, from whatever era, need a drug that keeps them awake. The drug of choice that allowed George and his fellow ravers to last the course was Benzedrine taken from broken up inhalers. The Benzedrine inhaler was intended as a decongestant, but you could break it open, remove the paper strip inside and soak the strip in a cup of coffee or tea. This was called a ‘B-Bomb’ and the preparation got so popular the manufacturers had to withdraw the inhaler from over the counter use in the early fifties."

Posted by SIMON REYNOLDS at 6:07 PM No comments: 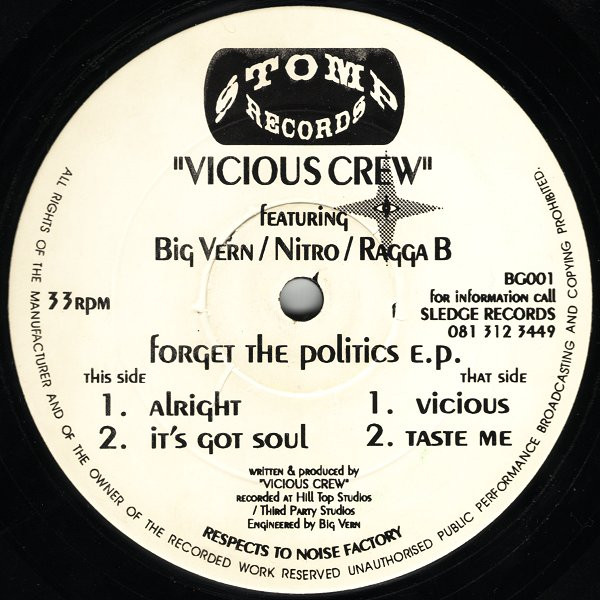 I wonder what politics they are referring to? Scene politics or polititricks-politics?

Respects to Noise Factory  - not just respect, but respects plural

If the stance is anti-politics, reminds me of these "fuck the government, any and all government" sentiments here 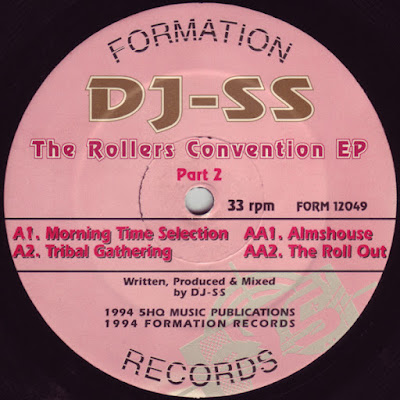 Another tune that is not on Selectabwoy's "The Typo Mix", his selection of titularly bungled jungle. I suppose it's not a typo, strictly speaking, but definitely a mistake.

(Or is it? Maybe SS actually was inspired by the treatment of the indigent during the Middle Ages.... Stranger things have happened in ardkore).

Posted by SIMON REYNOLDS at 12:43 PM No comments: