Jee-ZUS, look at the length of it (this after I've removed the ones I already know!)


There's a few in there where I recognise the name / title but no bells do ring - or where I know the tune, but not that particular remix. But the vast bulk are just zero recognition cases.

No way I'm going to actively comment on all of these - so what I'll do is highlight a few of these unknowns that feel special to me.


This one qualifies - nice eerie glinky slow-mo hynpo sounds noises at the start - then launches into more standard full-rinse battery, in the Dread Bass mode.


Again, good eerie intro - and then into tearing criss-crossfire of breaks, with nice clanking mechanistic killing-machine sort of haywire juggernaut feel, Rather more ideas in this than the norm with dancefloor-targeted D&B by this point - perhaps too many to really succeed (which explains maybe why i never heard this on any ravefloor). But earns points for effort.

Photek, in disguise - flipside to the "Dolphin Tune" - and like that tune very much taking on the Good Looking vybe. But a bit more propulsive - and in fact, despite the title, not that aquafunk in atmosphere.  Nice, but slighty run of the mill. I've already broken my not commenting on anything but killa tunes rule. Actually when it strips down it gets quite exciting in a spring-heeled cheetah sort of way.


Good one - unusual hissy-rustly beats, with something of a drum-solo-ish feel, and nicely warped and origami-folded vox from Anonymous Diva. Yup this is bit of a minor classic.

This one struck me as faultless and ferocious - yet not especially loveable. All right moves made, though.

Mr Parkes again, in tandem with Tayla.  I have this on the Logical Progression CD, of course -  but it must have washed over me as I have no recollection of it at all. Good Looking really was a clone fest, a curious exercise in narcissism, endless aural-mirror images of Danny Boy.  As impersonation goes this is immaculately done, with similarly clicky drum textures and warm blurry bass-booms as on "Atlantis". Whale cries too.

I never rated T Power that much - "Mutant Jazz" was alright - horn lick fabulously plastic, the beats a bit thin and reedy - but it was surpassed by the famous remix by Trace. The Self-Evident Truth of An Intuitive Mind left little impression, felt part of the nauseous glut of intelligence.  Listening to this tune now, though, I must admit - it sounds really good - different. Clattery metallic textures, distraught diva effectively latticed, melodic glints and overall a nice vaguely Eastern atmosphere that carries with it a faint future-scent of sinogrime.  Yup, something for the ever-enlarging canon (but pretty low down the rankings).

I must go through the Soapbar tunes at some point.

This though has got to be one of the gross covers of an era which had more than its fair share! 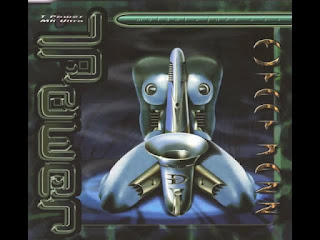 This next one is someone I have never even heard of, ever. On SOUR though.

Actually really rather good - like brisk, hissing, rotator-break  - vocal a bit blah, and the keys a bit wet. Much improved when it cuts back down to drums and bass - mad scuttling skitters of percush

So far it's been high yield, there have not been many I've just passed by altogether.

Inclined to like a tune that's on EP called Murder Dem EP, and that's on a label called Sub Assertive Sounds or S.A.S. for short. And with "Who Dares Wins" on the label too!

And this one is an unusual beat-structure -  different enough to include here but i don't if I'd add it to the ever-enlargening Canon, if honest.


Now we had Chimeira "Deeper Life" before, but not this remix I don't think

Yes this is something to add to the Great Ones List

but as provisional closure, a few thoughts on what makes a track Essential and Canon Worthy

one of the things with a music like jungle is that as a cultural formation it was so new, different, bracing that on a certain level ALL of it sounded amazing - because the fundamental proposition of the music is challenging, head-disrupting, life-rearranging. Such that virtually any instantiation of those generic properties done reasonably well is exciting to a fan.   In such circumstances the difference between a Classic and a solidly executed tune is less clear; only the truly sub-par, not-up-to-snuff, verging on defective tune rules itself out of consideration and contention.

When time elapses, though, the newness factor fades, and the canon starts to settle into shape

1. EXEMPLARY-NESS
absolute conformity to what the genre is about - not just essential but essentialist. Consummate genre-icity that approaches the definitive, in the sense of defining what this music and how it works. Example - "Terrorist" by Renegade.

2/ DIFFERENCE
the tracks that stretch the format, bend the form, renew the music, strange-ify it, push it forward into new spaces, open up unexpected possibilities - or become odd one-offs, that are never followed by anyone else. The quirky, the bent, the unusual groove, the uncommonly atmospheric or abstract-leaning. Example - "Drowning In Her" by Four Horsemen of the Apocalypse aka Foul Play - a track for which there is no like in all of jungle.

Blog to the Old Skool with a follow-up / riposte to that "renaissance of hardcore"  piece, filling in the gaps  in Ian McQuaid's history of ardkore and junglizm reissue labels, and giving special love to . the Formation box set, the  reissue of Potential Bad Boy's "Everyday Child" out of which spawned two labels, Sublogic and 92 Retro (never heard of the latter!) along with more recent imprints like Seventh Storey Projects and Scientific Wax.
Posted by SIMON REYNOLDS at 7:28 PM No comments:

and a mad remix