few months ago FACT posted a news blip on some new Joy Orbison tune... and i'm listening and thinking, hmmm it's nice... nice enough.... but this vaguely early 90s piano house pastiche, does it really, in 2011, cut the mustard? and how about this "new-old" effort shortly forthcoming under the even more queasy-making moniker Joy O?

Man Like Wise: "the current vogue that's spread from Addison Groove's Juke influence and Instramental's electro thing so now you've got all these tracks that sound like Radioactive Man from the early noughties.Bok Bok's recent FACT mix is a case in point,whilst I enjoyed it it just sounded so retro.Well made clones of great music but clones all the same.Maybe i'm just a bit too old now. I'm sure it's great fun if you haven't heard it all the first (or second or third time round)"

Man like Tentative Andy: "I do feel that some contemporary djs and producers (not all) tend to gravitate towards the blandest and safest interpretation of 'house' possible. It's interesting, from playing on Pirate Revival over the last few months and checking out the other djs on there I've really been getting into classic house from the 80s (Chicago, NY, early UK bits) and that stuff just sounds a million times fresher and more exciting than most of what I hear from, say, the daytime house djs on Rinse"

Man like mms: "alot of post dubstep does seem to be about just releasing tracks that are genre workouts in a way, outside of dubstep - things that people have done better over the years but without the atatchment to dubstep, its as if people have just gone sideways into music they always really liked but were never really part of as a 'movement' - almost as if its music people have got into thru youtube explorations or something"

Man like muser: "I've been a bit tired of hearing sets fall into straight-up house.. Joy Orbisons set last night for example seemed to consist of around 90% average sounding house."

Man like wise: "I don't have a long list of producers that I think are being ignored in favour of this stuff, i'd just rather listen to great old music than new average music. That Jaques Green track... sounds like fairly mainstream balearic house from a few years back to me. Maybe this is gradual drift into complete mediocrity is what the scene needs for a new wave of rawness to rear it's head and bite back. I certainly hope so."

then on another a different-but-related topic

Man like Bandshell: "I find the whole "neon synth" thing (for want of a better term) really grating.... I think it might be down the the production as well. All that sort of stuff is very clean and plastic. I prefer grit and lofi textures."
to which
Man like Sickboy replies: "it was so tantalizing when people like Joker and Rustie were first using it - it brought really exuberant and shimmery textures... an element of ecstatic joy... But now it just seems like it has just become de rigeur for the old man contingent of dubstep to include it in their sound pallete in order to make their tunes sound "refined" or "progressive." What I'm getting at is that what is achieved is the same as what is achieved whenever someone consciously tries to make sophisticated, urbane music: the absolute removal of any kind of joy whatsoever."

Man like Fundamental: "My problem with bass music at the moment is that it is slowly turning into boring progressive european techno. This is not a case of the scene cybernetics moving into negative, shit wobble or violence, it is a worry that it turns dreary, 'intelligent' or progressive."

Man like Gumdrops: "most of these guys are horrendously weak at programming drums. either that or they just dont like anything 'obvious'. or theyre too concerned with trying to make something 'intelligent' and 'emotional'."

Man like slackk: "I know about 3/4 of the stuff getting made by producers who I guess could be collectively grouped in this thread is just fucking dull... the amount of lifeless, far too tasteful stuff with no bass or bite with stilted 2-step drums is a joke. Honestly the state of a lot of stuff in this "nascent scene" is just dire. And really I don't agree with the idea of this being a new genre either, it's just loads of people making house.I think it was Luka who said on here recently that London music seemed a bit corny and fake to him lately and I don't know about that but I do kind of feel the same about this end of it"

not bad at all

* what Blackdown in this thread takes as
"controlled zig zagging within these close quarters" arguing that it is "just as fruitful as having one confined genre with lots of internal differences"
Posted by SIMON REYNOLDS at 8:03 PM 1 comment:

Posted by SIMON REYNOLDS at 8:25 PM No comments:

a feature package at literary webzine The Nervous Breakdown on me and Bring the Noise, which is out imminently in the US on Soft Skull... elements include excerpts from BtN on the voice in pop music and on crunk, plus an auto-interview about changes in pop criticism during the 25 years since I started doing it and getting paid 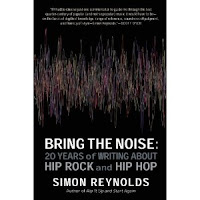 Posted by SIMON REYNOLDS at 9:23 PM No comments: 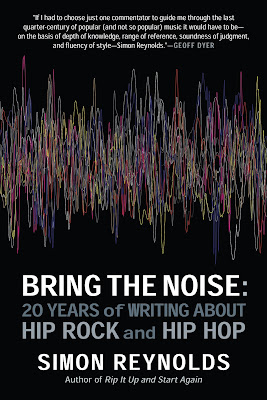 The US edition, with some bonus material added, out next month on Soft Skull. Has quite a bit of techno/jungle/2step/electronic related stuff in it, despite the overall theme of indie versus hip hop.
Posted by SIMON REYNOLDS at 11:35 AM No comments: