DRAKE ~ JUNGLE from October's Very Own on Vimeo.


Posted by SIMON REYNOLDS at 8:05 AM No comments:


some quite obscure figures included, among them Geral Strang (what a name)

and this slightly less obscure figure

Posted by SIMON REYNOLDS at 8:16 PM No comments:


from the FACT interview:

“It was definitely a conscious thing to combine the soundtrack stuff with club music... When we’re writing the aim is to ‘build’ a city with sound. It is a very Blade Runner, cyber punk, futuristic kind of thing.... A lot of the media we consume in terms of films, games, even music, is very sci-fi based."
Blade Runner - a reference point that is 34 years old
“We literally take from everything, video games, soundtracks. We’ll be sitting watching films, Alien, that kinda stuff, and it all comes together.”
Alien - released 1979. 37 years ago.


(I love the "everything" in that quote - the huge pancultural span from videogames to s.f. movie sound-tracks!)

Nightmares of Time coming to a standstill in 1984, the year of Neuromancer's publication, maybe!


I don't mean to be mean. I shouldn't pick on them really - because there's loads of others peddling the same kinda thing.

SRA are evidently skilled at what it is they're doing (weightless grime meets Metro Boomin meets Vangelis). It's just that the thing they're doing is rather over-subscribed.

And the larger point is: if you are trying to evoke phuture, you haven't a hope in Hades when the touchstones, the allusions, sound-textures, are all utterly deja vu, deja lu, deja entendu


These dystopian visions are so familar, they're cuddly at this point.


Posted by SIMON REYNOLDS at 10:24 AM No comments:

emerging genius, or, "You Didn't Auteur"

a fierce mix by Brian Badonde entirely of formative Dillinja, all from '93, i.e. before his Classic Era kicks off

interesting concept - "good, not great" / the Years of Emergence -  and i wonder what  are the other producers to which you could apply that approach? they'd have to be prolific enough to have made a mix's worth of formative material

Going back to Dillinja, i don't think i've heard hardly any of these on the mix tracklist....

Not sure why i haven't delved into Dillinja's prehistory like I have with other cherished and revered artists (e.g Foul Play, got the lot...  4 Hero got the lot, near-about anyway.. Gerald got or at least heard the lot... )

Now this really ought to give me impetus to revive the Hardcore Heroes Series of blogposts from last year, which petered out.  Those were also meant to entail me making - for my private amusement -  a bunch of Hardcore Auteur "tapes" : collations, on disc or just in my computer, of everything they did of that's any cop at all, every last B-side and alter-ego release, plus remixes of others too - all laid out in chronological sequence....

it's so easy to do nowadays with YouTube etc

Contrary to what Badonde says though....

"a far cry from his subsequent jungle works but instantly recognisable as his given the signatory big breaks, loud production and low hard hitting basslines"

.... I think with this early pre-great Dillinja, what's apparent is actually the lack of the signature that becomes so apparent later - it sounds perfectly generic darkcore to me (while also being triffic fun) and in that sense supports Pauline Kael's critique of the Auteur Theory, this idea that you go through a director's complete uuurv from star to finish and you find their signature in even the genre exercises, the hack work

With the Mighty D, the signature only really emerges with..... probably with "Sovereign Melody" or "Deep Love" or "Deadly Deep Subs", right?....

And then, strangely, the signature erases itself, as D becomes a D&B journeyman churning out the nasty-bass crowd-pleasers

Posted by SIMON REYNOLDS at 12:28 PM No comments:

when did the Weeknd become the svelte sound of blissy noir nihilism and flirting-with-the-void?


Posted by SIMON REYNOLDS at 1:38 PM No comments: 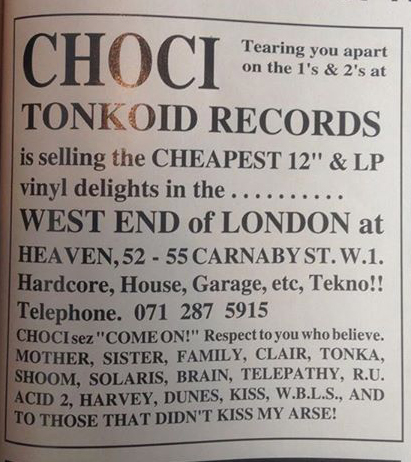 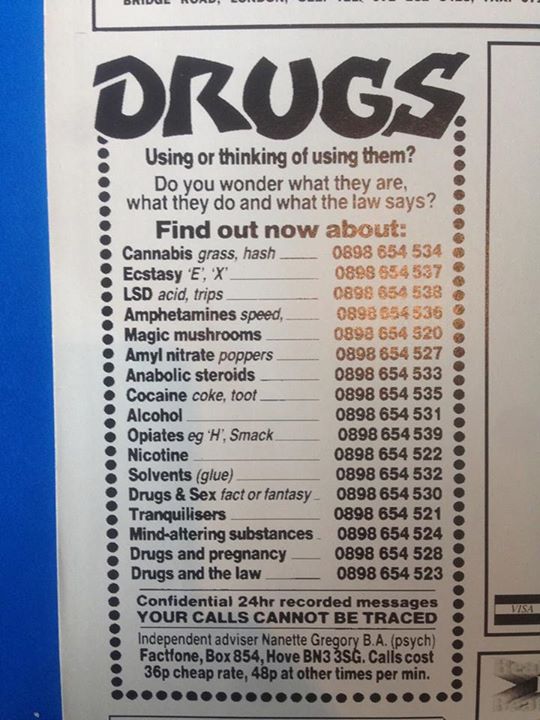 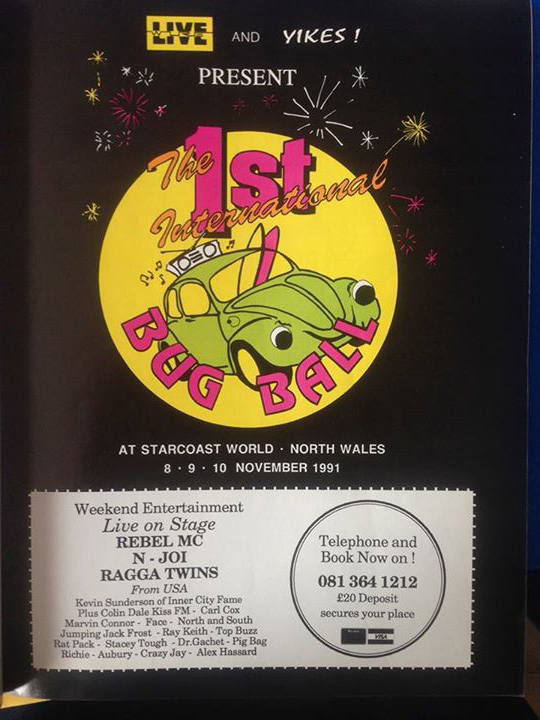 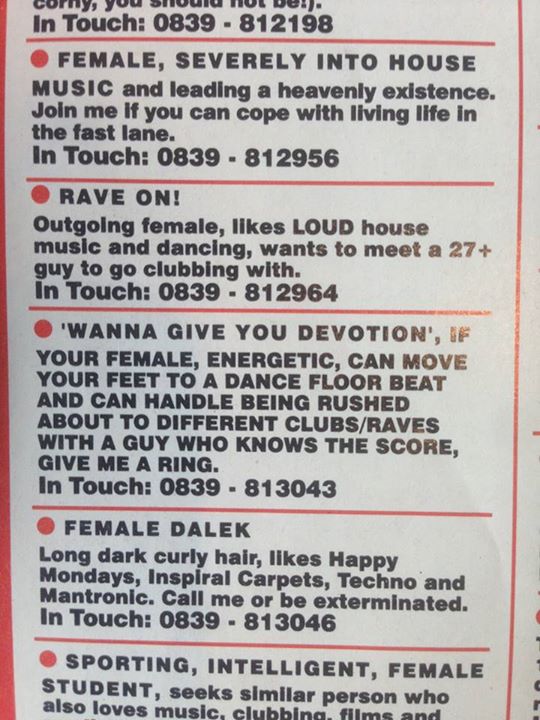 I love ads in music magazines in general – the things you find in old 70s Melody Makers, NMEs, ZigZags, Creems, etc (which I've been poring through the last few years for the glam book)

C.f. Lester Bangs's fantasy of owning a huge tunnelled labyrinth of stacks in which were stored every record that ever existed - which now exists for everyone, it's called Spotify / YouTube/ Internet -  my update of that fantasy would pertain to what remains still stubbornly material and un-digitized, which is the bulk of the print-and-paper music press pre circa 1998.

(Although I hear there are moves a-foot to digitize the IPC back pages in toto, which is a good move, and various searches and Googles will dredge up great swathes of things - many years of 1970s Village Voice, for instance, with all the small ads and box ads for concerts etc, as well as the reviews and features).

Yeah, a giant room - a maze of rooms - a building even, a back house - that contained most every music magazine that ever existed (well, Q I could probably do without, and Rolling Stone after 1978 probably), every zine....


It's the ads and the sort of para-cultural filler stuff that is as interesting as the reviews and interviews - where you can glean the smell and feel of the times.

Another thing I like is the way that publications that looked impressive and stylish at the time e.g. the Face in the 80s - look lo-budget and a bit shabby now. You see how thrown together it was, both design wise and editorially. Makes it seem more endearing as a cultural project - the projection of metropolitan cool and suss to the provinces, a fantasy of where-its-at / place-to-be...   all done on a shoe-string, in a rush.

But specifically re. rave, I have a shitload of old dance magazines boxed up in storage - Mixmags and Muziks and so forth, but quite a lot of the lo production values zine-ish ones.

Eternity and Dream and similar kind of happy hardcore-ish mags of the mid-90s have really tacky merchandise in them and photos of sweaty ravers that are often unflattering.  They seemed like that at the time, though - it's not a drop-off into uncoolness caused by the decades passing. 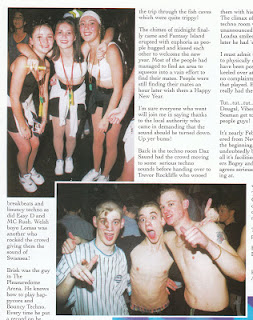 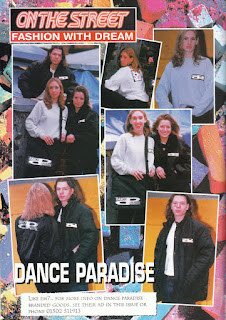 Posted by SIMON REYNOLDS at 9:51 AM No comments:


forgot completely about Shantel - used to love this stuff

Posted by SIMON REYNOLDS at 12:40 PM No comments:


(via Carl the Impostume at Neither here nor there)


Posted by SIMON REYNOLDS at 10:51 AM No comments:

Posted by SIMON REYNOLDS at 7:40 AM No comments: