peace of mind piece of memory


one of those early 94, back in the UK (after living in NYC for 18 months) tracks that blew my mind - sounded so fragrant, so spring breezy on the pirates in January, February, March - listening in the kitchen in the Belsize Park flat

never thought til now to wonder where the sample is from


this one, from the same sort of time, another favorite with a similar vibe, but less chilled - more disjointed - a panicky bliss

but no one seems to know the sample sources

once, after we'd moved back to America,  so later into the Nineties, I was calling up some doctor's office or official building of some sort or other, and got put on hold - and then I heard it, as muzak - the original sample-source as used by Gappa G and Hyper Hypa!!!!  it got played over and over (they kept me waiting a long time)

but there was no way to find out then  - no Shazam

Some rate the Bizzy B highly

Hyper Hyper getting remixed by Hype - could be confusing

Think there was some kind of double-pack, two 10-inches in a gatefold job maybe

ah i was right 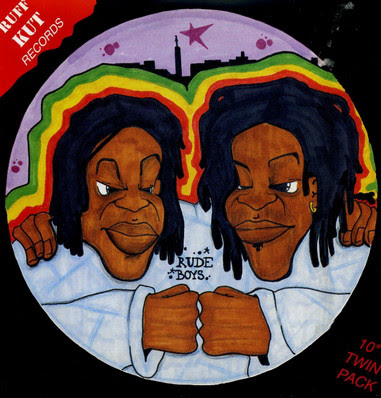 i have it but i'm not sure with the pic sleeve

now is this the original or the Ray Keith? (the labels got mixed up apparently)

it's great - only a notch behind the Ron version

(there were also a bunch of later remixes i discover, from after the enshitenment of d&b, so with useless skitter beats underneath)

I don't know anything about Gappa G and Hyper Hypa


Luton - not far from where I grew up. Another Hertforshire/hardcorecontinuum connection (Omni in Hatfield, Moving Shadow in Stevenage, Source Direct / Photek in St Albans, others too I think)

Perception FM! Had no idea there was ever a Herts pirate -  I would have stayed up all night secretly at my parents, on visits back to Berko, to tape it, if I had known.


They did loads of other tunes, Gappa and Hyper

This is the next best after "Information Centre"


But I came in with "Music Box"

What about its remixes?

Is that the only one? It's very subtle. I suppose how could you improve on perfection? (not that this has stopped umpteen remixers in any number of genres I suppose).

I must have got it only on CD (the last track on Drum & Bass Selection 1, that Breakdown comp)  because I have no recollection of its vinyl incarnation with this Krust tune on the flip

more brilliant than the sun

slightly more than seven minutes in...

never understood why they didn't title it "Long Dark Tunnel", as opposed to "Valley of the Shadows"

An extensive and intricate piece on the resurgence of UK garage, by Gabriel Szatan for Resident Advisor

A lot to take in

Came away wondering just a couple of things

- how big is this scene, or scenes multiple?

- it wasn't clear to me, from reading it, if anyone was doing anything new with either the UKG 4-to-floor classic sound or the 2step template...

if it's just a reiteration of those sounds, then it might well be highly enjoyable (sometimes I find myself in agreement with young Jess Harvell, who once declared that speed garage was his absolute favorite sound to dance to  - to which I'd add only that 2-step, while more formally radical and interesting to the ear, felt a lot tricksier on the moving-and-grooving side... basically you have to be a much better dancer than I ever was to do it justice)

but (and you know what's coming) a replay would be somewhat letting down the original push-things-forward, mutational spirit that led to UKG and 2step coming into being in the first place

from which light, the title of Szatan's piece rings ironic: Like A Battle: The Push For UK Garage's Future

still  - as recombinant repro-antique biznis goes, this choon (via Rudewhy at Dissensus) is really good


whereas this is sort of the ghost of Ghost

lived it once mate! didn't love it that much even then (gimme the rude 'n' cheesy any day... the silly novelty tracks)

yeah as a general principle sort of thing -
even the most bandwagon-jumping, mercenary-minded, shamelessly derivative track from 97/98/99/2000 has more spiritual-philosophical-ontological integrity (for want of a better word)

the most scholarly, meticulous, well-informed and well-intended reproduction-antique effort from now
because the former are participating (even if exploitatively) in a real-time wave of innovation as it unfolds, rather than going back and freezeframing that moving moment
which is why you (meaning me obviously) can get a buzz off of a shoddy third-division tune from backintheday, that you simply can't get from the most immaculate recreation

the buzz of historicity, of something happening for the first time, trapped in amber?

i do believe so
this principle applies to everything

the other garage revival (punk)

Still I expect I will wade my way through many of the names and labels mentioned in the Gabriel S piece, when I have a mo

Posted by SIMON REYNOLDS at 4:44 PM No comments:

Jon Dale alerts me to a new genre of "pastoral garage"

"The new idea is ‘pastoral garage,’ because I was thinking about all of the guitar textures in UK garage, and how I want to extend that. That also comes from the fact that I grew up listening to dance music in the countryside, and trying to get my head around what that means. How can we think about what dance music would sound like if it came from the countryside? And what does that say about intersections of queerness and race — because, obviously, the countryside is overwhelmingly white. Trying to break down a little bit of my position and context, and hopefully make some good, exciting, weird, increasingly specific music."

run of the mill gloriousness
proof of power of scenius
Posted by SIMON REYNOLDS at 1:00 PM 1 comment:

A bit of a theme - this is the track that immediately follows it on the album!


what a great little tune that i somehow never heard it

there's a bunch of Juice Box releases that aren't A Guy Called Gerald  - either him in alter ego mode, or other egos altogether

"Warpdrive" had such an impact on me back in the day

Photek remix I never heard before, or heard of.

This was the other Crystl monstertune - "Let it Roll"

And then the rmx

And then the Photek remix, from 2004  - some special connection there clearly


Crystl had lots of other good tunes, but those are the two that stick with me

Now wasn't there supposed to be a DJ Crystl album in the works?.

I  vaguely remember speaking to him for the ambient jungle piece, or intending to - either nothing came of it, or he didn't have much to say. In the event, kept it focused on Omni / Foul Play / Goldie / Gerald / Neil Trix (yes that's the inclusion that seems retrospectively a puzzler, but at the time,  he seemed of great promise).

Crystl was among that very first batch of junglists to get signed to a major with a view to being an album artist, I seem to recall. But said album never materialized.

Was there talk of him veering in a hip hop direction?

Ah, it seems I am not wrong, about the album deal. At Discogs:

"Signed for London Records/Payday on a reputed 5-album deal."

And there was this hip hop flavored EP on Payday called Perpetual Motion:

But it was a bit underwhelming

Certainly no match for e.g. this

The deal must have fizzled

Clearly one of those big-seeming deals, potentially involving large sums of money and multiple albums, that is dependent on the impact of the first single or singles, or EP in this case. Where the major has the option to decline to take up the option.

After that, came this single

This is what it says on Discogs about what came next:

"Now retired from music and working as a personal trainer."