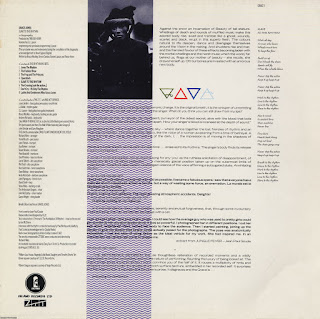 Posted by SIMON REYNOLDS at 9:31 AM 2 comments:

Now this here is not the last d&b tune ever that I've liked...

But it's the last one I loved loved luvvdit2dabone

In the summer of 2002 "LK" was getting played nonstop on the pirates - well actually on the pirate, singular - since there was just the one playing drum + bass, amidst a whole heap of UKG and proto-grime pirates - at least that I could pick up in the part of West London where we were staying (I was over to do research for Rip It Up). I was surprised there was even one pirate, so far had the d+b slipped out of nuum's orbit by that point.

But that's where I heard it, on the one and only drumnbass pirate.

I associate this tune's skittering beat with my 2 year old running madly round and round the little coffee table in the rented ground floor Ladbroke Groove flat were staying in.

A family favorite it was. A little lightning bolt of sheer joy.

So it's "LK" and Dizzee's "I Luv U" (the instrumental version) and "Pulse X" that are my abiding musical memories of that summer.

Mostly I was holed up in the British Library going through old copies of Sounds and The Face, or trying to chase down the elusive Keith Levene and going round to Martin Fry's gaff and doing little expeditions to Bristol and Manchester and Sheffield, to soak up any surviving postpunky vibes and interview relevant parties. A curry with Richard H. Kirk. Steven Morris's house way out in the Cheshire countryside.

I think I only managed to go to one club that entire summer.

Although very fond of the Stamina MC "all I know is this tune / tear up nuff venue" chat on the single version, I ultimately prefer this instrumental version

Strangely though I have never until this moment heard the original song that it is - not based on, but largely composed out of, in terms of melodic, harmonic and textural substance.

D&b was hot there at the end of  the 1990s. Not with the general populace, but the cool kids. It was such a huge city and population that it could support all these different music micro-cultures, and some of them were incredibly Anglophile, obscurist Anglophile.

4 Hero were there and did a music production workshop. They also, if I recall right, did some kind of not hugely fruitful live stage jam session with Azymuth, or members thereof. I think the whole concept was British music(ians) meets Brazilian music(ians).  Better on paper.

In the music workshop, I asked Dego and Marc "What in your opinion are THE most must-to-avoid d&B structure-arrangement and/or production cliches? The ones that make you groan when you hear them in a track? That you'd never in a million years allow to bear the Reinforced label, let alone the 4 Hero one?"

They seemed tickled by that. Hint of a smile broke on their otherwise impassive and laconic faces.

Can't remember what they said though. They mimed out, vocally, a few well-corny drops and intro lick cliches, I think.
Posted by SIMON REYNOLDS at 11:48 AM 3 comments:

i wonder if this was inspired by "Swan Lake" aka "Death Disco" by PiL?

seems unlikely with your nuum, but you never really know

quite a few of them have a secret postpunk connection

e.g. Dem 2 would you believe, one of them had a postpunk past

either that or a 2-Tone one


ah but talking about the ska / rocksteady traces in nuum

this, this here could quite possibly be a sideways inspiration for "Death Disco"

and hey i did not know that Madness did a version, and in more or less the same time-period as PiL

that's weird that cos in the 2-Tone chapter in Rip It Up - which follows directly after the PiL / Metal Box chapter, i start by contrasting "Gangsters" and "Death Disco", the Specials mono debut LP and the stereodubspacious Metal Box...


That version of "Swan Lake" by, hahahaha, Swan-E  - a cover which is funnily enough titled "Gangster" -  weird chains of echoes here - that was on the Cage Underground label.

is sampled in this

but i'm sure that either the Twinkle Brothers original lick or its Rebel MC relick is sampled in another hardcore / jungle tekno tune  - late 92 / early 93?  a real mad sounding tune.

yesterday, via twitter -  within seconds - the omniscient Ian S comes with the answer

tuuune
Posted by SIMON REYNOLDS at 10:53 AM No comments:


the madness in my brain that's for sure
Posted by SIMON REYNOLDS at 11:01 AM No comments:

Ian S spots another link in the chain

"there are no nations"

on the actual Lover's Rock label

One of the later Brown Sugar singles, there's another group on the flipside, doing this song - which I half thought would be some kind of oblique inspiration to PiL's "Albatross", but it turns out to be a cover of the (early, Peter Green era) Fleetwood Mac hit!

Posted by SIMON REYNOLDS at 6:25 PM No comments:

Posted by SIMON REYNOLDS at 9:27 AM No comments:

"Simon, don't give them any good reviews, until they've paid their ads..."

no really, that's the first line of the song - rather taking me aback!

it's a bit of a heavy-handed satire

and (whisper it) although not "a load of old rubbish", not one of the Prof's finest moments 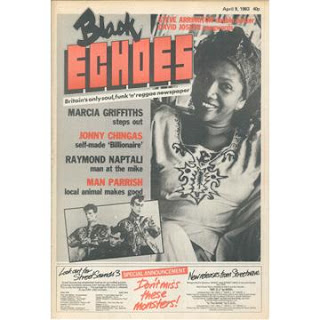 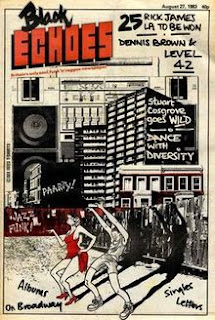 Posted by SIMON REYNOLDS at 11:28 AM No comments: