An early work by Neil Trix (who a few years later I'd interview by phone for the Ambient Jungle / Nuum Series #2 Wire piece, largely on account of his majestic audio-canvas "Gesture Without Motion" which appeared on Enforcers 6 & 7)

But where's that insistent (indignant?) diva vocal from?

More FBD Project darkcore - bit of a classic, with the downswooping slime-sounds and doomy bass-steps

Regarded highly enough to get the Johnny Jungle remix

"some of us live for the future" the voice wheedles slimily

According to Discogs, the FBD in FBD Project originally stood for Funded By Drugs

Then later on it stood for Future Beyond Dance

In that little shift, the story of rave is distilled

From the frenz-E of NOW! to an increasingly kitschy palette of futuristic imagery, titles, names and sonix

Bang-In-Tunes though, as the label name Trix & cru stuck with right through to 1998, continues to fly the rave flag 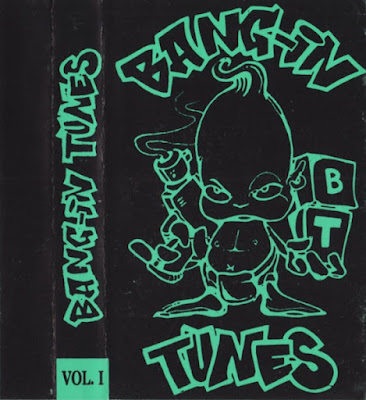 "Bang-in Tunes was originally a Coventry record shop with close links to The Eclipse and Amnesia House. The shop's Baby&Gun art work was done by Coventry graffiti artist Toz.

The label was owned by Luke Coogan & Neil Trix (aka FBD Project), with much of the studio work done in the basement studio of the shop on Hale St. Coventry.

Launched as a hardcore label the first release came out in 1992 and was followed by some classic dark side in 1993 before moving towards the more intelligent drum & base style from 1994 onwards." 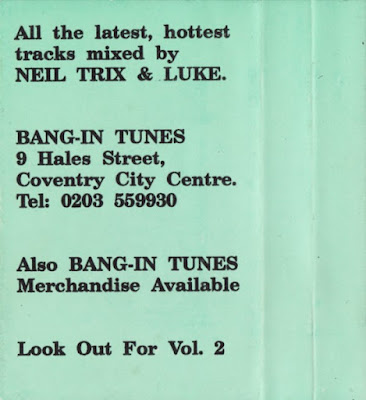 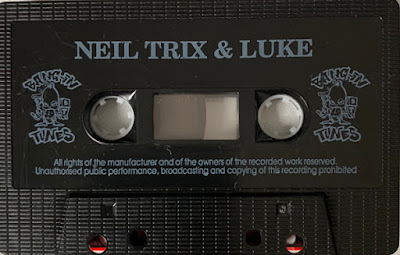 with the tunes ID-ed here

I shall leave you with "Gesture Without Motion", the T.S. Eliot "The Hollow Men"-via-Marlon Brando  / Colonel Kurtz via Apocalypse Now sampling epic done for Enforcers 6 & 7

I remember listening to this over and over on headphones on the beach at Shelter Island that summer.

A VIP unreleased version that came out a few years ago 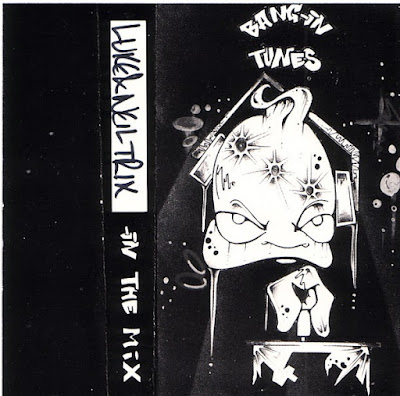 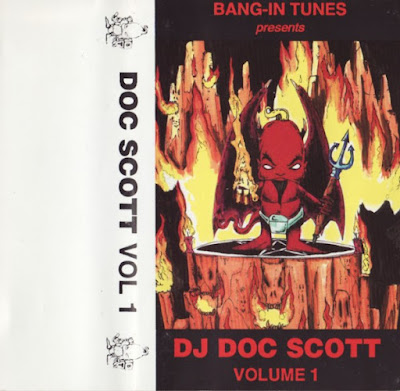 Posted by SIMON REYNOLDS at 2:56 PM No comments:

In a recent comment in an older post, Thirdform sez that  Neurofunk is not a completely barren zone

These are his recommends for "stalkerish feverish" killers.


"The Black Son Empire turns it into a cyborg switched up monster."

It's odd, probably in '95 and '96 and right through into '97, I was following d&B more fanatically than ever - buying a huge number of 12-inches, blagging every compilation and album going, going out to clubs every week.

The pirates tapes I have from '95 onwards, which are plentiful (mostly taped in a frenzy while back in the UK on a trip or vacation) - I never ever play. Nor do I seek and acquire the many pirate sets from post-94 that are out there to be nabbed. (Partly it's cos D+B gets too professional - the nutt-E-ness is gone. But it's also the kind of the tunes in the sets.)

Tune-wise  - there's some things from '95, fewer from '96, almost nothing from '97, that I'll pull out (and the ones I do, they'll tend to be on the smoother, more cinematic side of things - or full-length album statements)

So I'll rarely play techstep even though No U Turn et al was absolutely a moment when my faith was floodingly restored. And a phase that resulted in some of best nights out ever in NYC. Not sure why - if I was to put on "Squadron" or "Metropolis" I'm sure it would be as mindblowing as ever. But the urge never comes.

The one tune I probably do give a spin regularly over subsequent years would be "Shadowboxing'" - just IMMENSE.

Then neurofunk is really when most things I loved about ardkore / darkcore / jungle / early artcore - these things just go  AWOL. It's like a whole new culture almost. It becomes a form of techno again - but not techno in the Belgian sense, or gloomcore sense.

Perhaps the stuff leading up to neurofunk doesn't appeal because I can tell where it's going - it's a hindsight-taint. Disappointment ahoy!

Posted by SIMON REYNOLDS at 11:51 AM No comments:

"Some of this is due to TikTok, where artists like the young British vocalist PinkPantheress — who sampled Adam F’s drum-and-bass classic “Circles” for her viral hit “Break It Off” — and piri, whose sprightly, slinky liquid D&B single “soft spot” has now passed 12 million Spotify plays, got their first boosts."

But DJs are playing it out in the clubs too apparently.

"The surge is worldwide — from Indonesia to Australia — but the U.S. has been particularly voracious for drum and bass."

“I’ve just been on a film shoot, and somebody said, ‘My dad played me this music", proving, sez Mr Rufige, that that D+B is now “the new Motown.”

vocal lick from this Candi treat

the lickable bit appears in many other nuumy tunes

classic obviously
Altern-8 tune also featuring eerie cavernous voice from Nitro Deluxe obscurity "On A Mission"
Gang Related / Mask is a killer that I either missed at the time - or got and then forgot....
Pingy-delic bass + dense contorted breakage + delish triggered-Candi voco-science
Connection tune woven almost entirely out of familiar already used licks breaks and samples but curiously - and this is characteristic nuum magic at work - is no less compelling or time's-passage-defying fresh  for all the apparent redundancy
magic of Nuum = telling a different story with the same materials and ingredients, aka the changing same, aka Black music
E-Motion indeed
clearly sugarholics, Noise Overload also confected this supasweet spin on heaven-scented lovers rock swooner "Silly Games" by Ms. Janet Kay

Posted by SIMON REYNOLDS at 9:42 AM No comments: