DIZZEE RASCAL for The Word magazine's People of the Decade
director's cut, The Word, January 2010

It was the voice that grabbed you. A voice like wounded eyes. Strung taut between lashing-out and tears, its rapid-fire, blurting rhythm was like thoughts racing so fast they trip over themselves. That voice was heard first on a white label played with mounting frequency on London's pirate radio stations during the summer of 2002. "I Luv U" dramatised the war of the sexes as a duet (Dizzee's “that girl’s some bitch yunno” thrown right back in his face by an unidentified female MC) over bass-blasts closer to hard techno or punk rock than UK garage.

The voice was unique, quirky, but also collective, the sound of the streets. Dizzee's back story likewise told of the struggle of an exceptional individual but also somehow who was the product of an environment. Raised in "the ends" (East London) by an African-born single mum, Dylan Mills was kicked out of four schools in four years, got into all kinds of trouble, looked likely to get into worse. But then, like so many others from the same place, Dizzee found a way out through music. "Where I'm from, there ain't a lot of other options," he said in 2003. All that aspiration and desperation forced through the narrow channels of pirate radio's intense competitiveness had created a scene overflowing with talent. "Thousands of DJs and MCs… it’s kinda our hip hop," said Dizzee of the genre that what would soon be known as grime. "I think this country needs to listen to this country more. Americans speak English, what are [US rappers] gonna tell us in our own language? There’s ghettos here--it’s not recognized. We’re underneath… and we’re about to blow up and rise."

Blog-buzz propelled the teenage MC towards an XL record deal and "I Luv U" was given a full-blown re-release in early 2003. Too harsh for radio, the single only dented the UK Top 30. Boy in Da Corner, the debut album, showcased just how many sides, emotionally and musically, there were to this reflective rude boy. On the dreamy, vaguely Oriental opener "Sitting Here," he's the painfully acute observer (“I watch all around/I watch every detail/I watch so hard I’m scared my eyes might fail”) while on the equally ethereal closer "Do It" Dizzee revealed his fragility ( "everyone’s growing up too fast,” “it’s almost like I’ve got the world on my shoulders sometimes.”) But in between he was cheeky and cocky, boasting on "Fix Up Look Sharp" of “flushing MCs down the loo", while on non-album track "Ice Rink" (produced by Wiley, his former colleague in Roll Deep) he instructed listeners to "kiss from the left to the right/kiss til my black bum-cheeks turn white”.

Boy made 19 year old Dizzee the youngest Mercury Prize recipient ever. A win can be a mixed blessing, almost a career ender (hello Gomez), especially for "urban" acts (hello Roni, Dynamite, and possibly Speech Debelle too). But Dizzee was too shrewd, too strong for that. He had no interest in being a critics darling and his ambition extended way beyond grime. For a while he kept a foot in both underground and mainstream. 2004's Showtime mixed experimental beats with poppy novelty singles (the Captain Sensible "Happy Talk"-sampling "Dream"). Sounding confused and torn, he talked about how still being part of grime, "I just don't do raves and I don’t do pirate radio". (But without raves and pirate shows, what else is there to grime?). 2007's Maths + English took a firm stride towards realizing Dizzee's popstar promise, with the old-skool rap rampage "Sirens" and the Lily Allen over Bugsy Malone team-up "Wanna Be". But it was eerie opener "World Outside" that served as a message to his scene: "there's a world outside of the ends and I want you to see it/I can see it." The message was: Goodbye.

Dizzee got strategic next. Where once he'd made most of his own backing tracks, now he farmed out production to a motley bunch of beat-makers that included New York house ruffian Armand Van Helden and electropopster Calvin Harris. He was no longer grime (sinking back into the underground, that scene could no longer serve as a launching pad for anybody) but simply a modern-day pop musician, sonically all-over-the-place. Fourth album Tongue 'N' Cheek is not an aesthetic triumph like Boy, but a canny mixed bag that serves to cap a triumph of a different sort: it contains three number one singles, all scored within just over a year. The Rascal is now the king of pop's castle. The mark of Dizzee's achievement is that newspapers don't describe him as "top grime MC" anymore but as "the UK's biggest rapper". He was even invited on Newsnight to discuss the election Barack Obama, where he impishly entertained the possibility of himself being Prime Minister one day.

With supreme cunning and determination, Dizzee Rascal maneuvered his way through the Noughties, ending up exactly where he wanted to be , where he deserved to be. With the punk-house stormer "Bonkers", the second of that string of chart-toppers, Dizzee ended the decade in fine style: riding a sound as exciting in its own way as "I Luv U," with words that turned the despairing darkness of Boy In Da Corner into a sort of dayglo nihilist cartoon. As he put it back in 2002, "There is so much to care about in this world… If you give a shit, you’ll go nuts."
Posted by SIMON REYNOLDS at 7:53 PM No comments:

flicking through this book 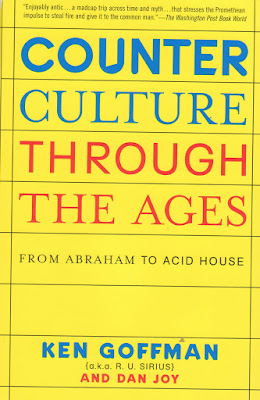 i came across this page, which has some erroneous information in it -- see if you can spot the mistakes 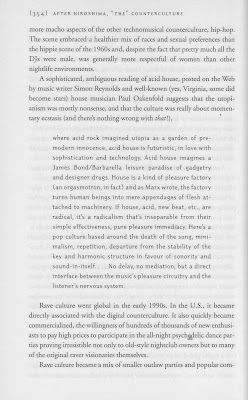 it wasn't posted on the web (well, not by me or "paul oakenfold"), it's from Blissed Out's chapterette on acid house, which itself originally appeared in Melody Maker in February 1988

it was Melody Maker (and before that Monitor) colleague Paul Oldfield
Posted by SIMON REYNOLDS at 1:32 PM No comments: 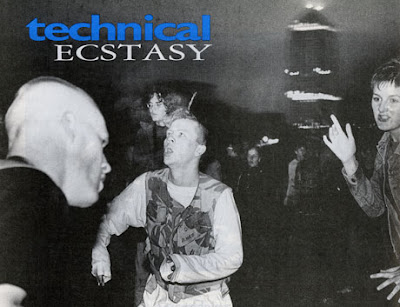 Posted by SIMON REYNOLDS at 6:43 PM No comments:

the whole album
Posted by SIMON REYNOLDS at 6:36 PM No comments:

= ardkore
Posted by SIMON REYNOLDS at 9:10 AM No comments: 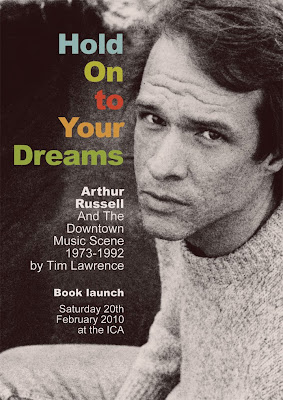 London massive may wish to attend the launch event for Tim Lawrence's excellent study of Arthur Russell, Hold On To Your Dreams, at the ICA on February 20th.

Tickets can be purchased via the ICA website; updates, news and further information re. the launch and the book can be found at Tim's book blog. 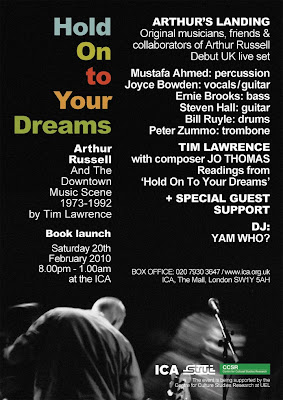 Posted by SIMON REYNOLDS at 6:55 AM No comments: