"DJ Balli is one of the most brilliant sonic minds of his generation: producer, performer, writer, label owner, and much much more. Composer (and long term fan) of hardcore electronic music, he's always believed in the intrinsic subversive power of up-tempo, 'not-intelligent' dance music as opposed to the most pretentious, self-important, byproduct-of-the-ancient-rockstar-system electronic scene. On his path, he met the infamous Italian outcome ArteTetra where he found the perfect platform to express his borderline take on music. Next October the 14th, the world will meet DJ Balli's last effort called 'SVELTO, the Hakken Tuner', recorded with the precious contribution of long-dead Futurist Giacomo Balla, out on International Cassette Store Day for ArteTetra as a part of the "Functional Tools 4 a Better House Living" series' first batch that will also include the 'Musica Lavapiatti' tape by Shit and Shine. Preorder is up at the link https://artetetra.bandcamp.com/.

"Here you can take a look at the exclusive tape trailer we at PAYNOMINDTOUS.it put together couple of weeks ago using the cassette's original tunes as soundtrack, and starring - of course - the almighty DJ Balli, who gets to trace back his origins directly to Giacomo Balla, futurism, pyramids ( .. ) and thirst for speed, also featuring PREVIOUSLY UNSEEN FOOTAGE shot in 1996 during one of the legendary Number One (BS, Italy)'s Hardcore Warriors nights' finale. We'll be presenting the tape on our website [https://paynomindtous.it] next Friday. So, enjoy the clip in the meantime, coming with English subtitles, and share it if you like it & want to support the amazing guys at ArteTetra. Let's finally acknowledge back the power to subvert the status quo that have always belonged to stupid, ruthless and violent music. P.S. Ah, did we mention the fact that 'SVELTO, The Hakken Tuner' is a hardcore gabber record? Yeah you heard us: not those fancy, horrible mainstyle revival stuff, we're talking real (weird) shit here. You've been warned!

Gabba feature in Dazed and Confused focusing on the curatorial efforts of Ewen Spencer and Alberto Guerrini, creator of something called Gabber Elegenza and the Hakke Show. Here the emphasis is less on the sonix and more on the style of the subculture. 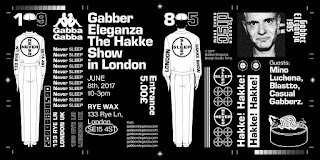 [via Karl Kraft]
Posted by SIMON REYNOLDS at 8:13 AM