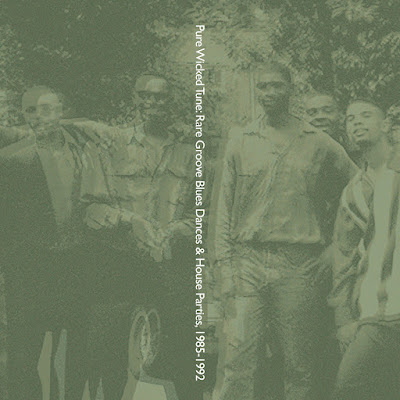 Following sharp on the heels of the pair of Pause for the Cause London Rave Adverts compilations, here's Luke Owen from Death Is Not The End with another splendid comp: Pure Wicked Tune: Rare Groove Blues Dances & House Parties 1985-1992.  A wonderfully vibes-full document of what you might take as the prehistory of the nuum - a musical mulch of smoovgroov that would get tapped all through the '90s as a source of samples and texture-flava to drape over the exoskeleton of beats + bass.

Sounds like Funkadelic, Touch of Class, Latest Edition, JB Crew, Manhattan, 5th Avenue (and the many more featured on this tape) originally began to form in the mid-1980s. With lovers rock dwindling, and the reggae scene becoming dominated by harder digital-style dancehall, these sounds provided a tight but loyal crowd with a potent alternative - playing a mixture of killer rare soul, funk and boogie records in an inimitably reggae soundsystem style, complete with toasting, sirens and effects aplenty.

They were most well-known for playing at house parties and blues dances, typically in small flats or warehouses, with timing of such events generally running from the early morning hours until late the next afternoon. Though the popularity of the sounds faded following the dance music explosion of the early 1990s, there has been continued demand for revival sessions ever since. Whilst the influence of key British reggae & dancehall soundsystems on subsequent UK sounds like hardcore & jungle is relatively well documented, a similar line can just as easily be drawn from these sounds and the aforementioned styles' tendency toward sampling popular rare groove cuts, particularly well evidenced in the work of Tom & Jerry, 4hero, Reinforced & LTJ Bukem among others.

This represents the first outing in a series of collections exploring the sounds of UK soundsystem culture, via extracts from archival DIY cassette recordings of blues parties, dances & clashes made between the late 70s and early 90s. Often duplicated and shared widely, these ruff and ready "sound tapes" provided keen ears with music that wasn't otherwise readily available on the airwaves or in the record shops, and would go on to leave a deeply-rooted but too often overlooked influence on the UK's musical landscape.

Posted by SIMON REYNOLDS at 9:45 AM

Labels: BLUES DANCES, DEATH IS NOT THE END, LUKE OWEN

It's interesting that the rare groove scene documented here is at a remove to the rare groove scene that perhaps is better known i.e. the one featuring the archetypal Duffer-clad trendy dancing to Maceo & The Macks upstairs at the Electric Ballroom in Camden. Simon - I don't think this was much to your taste if I remember your past observations. A motivating impulse in both scenes however was the relative paucity of good contemporary R&B sounds after 1984. US R&B for the remainder of the '80s was pretty dire. At the moment, I'm seeing a lot of CD reissues from Japan of late '80s mainstream soul and swingbeat, but I'd rather not go there (again). Good compilations of rare groove tunes that might appeal to buyers of the Death Is Not The End offering include two volumes of 'Boogie Tunes' on Graphic Records, and the RCA 'Rare' series from the late '80s. Morgan Khan's 'Streetwave: The First Three Years' comp is also a good insight.

Yes much of the stuff on this comp doesn't sound much like what I remember as 'rare groove' in the 80s, but then I didn't get that up close as it wasn't my bag at all. Seemed like another style bible-favored snob scene. My dislike stems to quite large degree from this occasion in 1987 when Melody Maker had its annual party at the Wag Club - the DJ, a proper snooty twat, steadfastly playing nonstop second-division '70s funk all night long in blithe disregard of what anyone in the club that night might rather have heard (if me and Stubbs had been in charge it would have been Mantronix and hip hop and Nitro Deluxe with the occasional outburst of Young Gods and "Asbestos Lead Asbestos") (really not sure why MM didn't put some of their journos on decktician duty - then again probably shrewd given that our main objective that evening was getting incredibly drunk). At any rate that night certainly deepened my distrust of that whole scene but the feeling that it was lame and backward-looking was already established. (Wasn't much impressed by go go either, another of the style mag / pre-rave clubscene's crushes of the time).