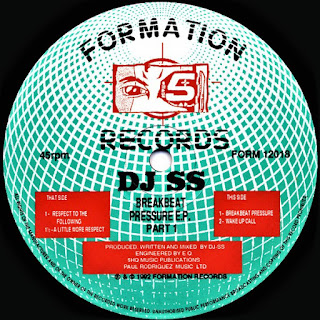 Listening again to this fun  DJ SS track from '92, "Respect to the Following"  - a tribute rollcall to scene luminaries each deemed "hard-core", the word delivered in a sing-songy tone-drone presumably by SS himself - I noticed a little detail on the label. On the first side of the EP, "Respect to the Following" is followed by a brief extension titled "A Little More Respect" -  so brief it is marked not as track 2 but track 1½ !

"A Little More Respect" is not to be found on YouTube, but I had vague memories of hearing it, or a bit of it, in a mix. Sure enough, here it is, at the start of a Mumdance mix.

Below I have extracted it for a vidclip - it appears to be a composite of the intro to "Respect to the Following" and some unknown portion of a "A Little More Respect".

YouTube has several postings of "Respect to the Following"

But "A Little More Respect" is disrespected by the ardkore archivists, who clearly regard it as a trifle too trivial for preservation and dissemination. Oddly discriminating, giving the amount of absolute garbage piled up there for posterity. 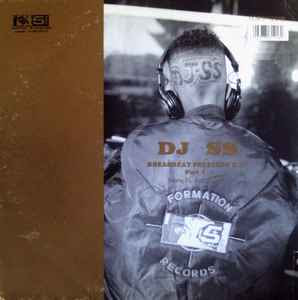 Now I have the vinyl of the EP (DJ SS  Breakbeat Pressure Vol. 1) on which these tunes appear but it's stowed in storage far out of my reach. So if anyone happens to have the whole (small) extent of "A Little More Respect" handy and shareable, I would love to hear it.

Perhaps even release it into the wild. Even a half-a-track deserves its moment. Stop press  - mixologist supreme Selectabwoy comes through with the whole track! I don't think it's much longer than what Mumdance used - here it is, though, for posterity's sake.

Posted by SIMON REYNOLDS at 4:49 PM

feel free to YT it or whatever
Selectabwoy x