more avant-garde music made for ballet!

I'm always surprised that people don't send this kind of thing to me, or at least tip me off - given that i'd be fairly certain to review it somewhere, or at least give it a plugg on the blogg -

review by me here (of the reissue, not the original performance, when i was 3 and three quarters)


Bruce Levenstein chips in with a suggestion: 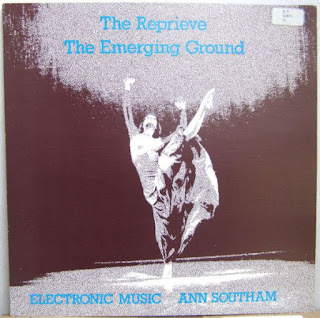 You used to be able to hear a bit of "The Reprieve" here -  where I borrowed this chunk of text below - but alas no more:

In an interview [Mitchell, C.J. 'Warmth a characteristic of Ann Southam's electronic music,' MSc , 269, Jan-Feb 1973]  Southam spoke of her interest in collaborating with choreographers to create modern dance works rather than ballet, in which visual patterns often replace audible ones. In modern dance the music and dancers work independently and in conjunction, creating tensions that are doubly suggestive and effective. She has also explored composing to existing choreography and this has allowed her the opportunity to deal with what she refers to as "chance relationships".

An example of Southam electronic music used for modern dance is The Reprieve (1976), which was choreographed by Patricia Beatty for Toronto Dance Theatre.

THE COMPOSER
Ann Southam was born in Winnipeg, Manitoba in 1937 but has lived most of her life in Toronto. After completing musical studies at the University of Toronto and the Royal Conservatory of Music, Ann began a teaching and composing career which has included a long and productive association with modern dance. As well as creating music for some of Canada's major modern dance companies and choreographers including The Toronto Dance Theatre, Danny Grossman, Dancemakers, Patricia Beatty, Christopher House and Rachel Browne, she has been an instructor in electronic music at the Royal Conservatory of Music and has participated in many "composer-in-the-classroom" programs.

While much of her work has been electroacoustic music on tape, she has become increasingly interested in music for acoustic instruments. She has composed concert music for a variety of acoustic instruments and ensembles, working with such artists and ensembles as Eve Egoyan, Beverley Johnston and Arraymusic. Southam is a member of the Canadian Music Centre, the Canadian League of Composers and a founding member of the Association of Canadian Women Composers. 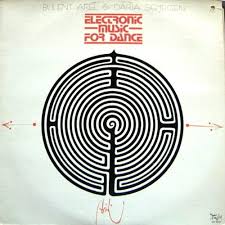 The piece consists of five parts whose themes, tempos, and "orchestrations" are arranged in the shape of an arc (A B C B A). Each section is itself divided into a smaller arc (a b a). After a brief introduction of phrases in groups of three beats each, the first part begins with two motivic elements arranged in a simple question-answer idea: lower range sounds on the beat, and contrasting high echoed flourishes in alternation. Section B introduces both a new tempo and "orchestration" or sound texture, as well as a new motive featuring a tremolo effect on harsh sounds alternated in various patterns from one channel to the other. A six note ostinato appears toward the middle of this section and is gradually integrated into a polyphonic pasage. Section C's theme resembles an orchestral "tutti" and is followed by a variation of the tremolo idea and echo figurations heard previously. Although the music is essentially tonal and establishes various temporary tonal centers throughout, microtones and the characteristically rich textures of electronic sound sources provide dissonant impressions counterbalancing the tonal aspects. The work was composed using a Buchla series 200 synthesizer and classic studio techniques. The music tape was synchronized at Bell Telephone Labs with the program of the Mimi Garrard Dance Theatre's portable computer-controlled lighting system by Mimi Ganard and James Seawright in preparation for Arc's first presentation in May of 1977. --Daria Semegen 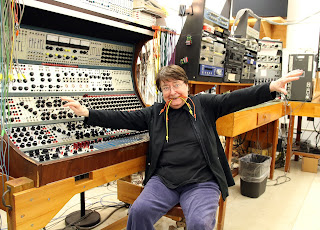 Posted by SIMON REYNOLDS at 2:53 PM