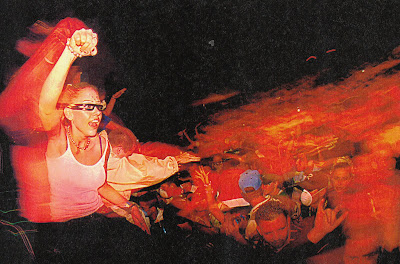 Everybody knows the famous saying, "Writing about music is like dancing about architecture" (attributed variously to Frank Zappa, Thelonious Monk, and Elvis Costello). Some may have heard, or independently come up with, the less-famous retort: "hmmm, 'dancing about architecture' --that actually sounds cool, like some kind of performance art, street theater thing". The erudite will also point to Goethe's famous dictum: "architecture is frozen music". But amid all this merry perennial back-and-forth about the futility and absurdity of music criticism, no one ever addresses the burning issue of our epoch: why do dance journalists never talk about dancing?

It's true, you know. Scrutinise the features on new genres and scenes in Mixmag or DJ, dredge up your back copies of now-deceased publications like Muzik and Ministry. There'll be stuff on leading deejays and producers, about crucial labels and clubs; the geneaology of the sound will be traced, its location in the contemporary genrescape will be situated. But invariably there'll barely be a single reference to the music's primary function and its fans' major form of expressive response: getting down, shaking stuff, throwing shapes. What's odd about this deficit of attention is that the different styles of dancing play a huge role in creating each scene's vibe. Second only to the music itself, dancing is what supplies the colour and character of dance subcultures. The ritualized crowd responses: rewinds in jungle, UK garage, grime, dubstep. The mass Pavlovian reflexes: all the builds and drops built into the music that are only meaningful because of the way they trigger collective responses like hands flying in the air at the breakdown.

So why don’t dance writers deal with this stuff? Are they just not terribly observant? Or does it seem too obvious to talk about? Perhaps it's felt to be non-revlealing compared to establishing who pioneered such-and-such a sound, or what piece of technology underpins the genre. Maybe it smacks too much of anthropologists monitoring the tribe's rituals. I wonder if it's got something to do with the dance mags' original orientation, which was very much towards servicing deejays . And deejays are notorious for never dancing, possibly because it's too much of a role reversal for them to let themselves be 'controlled' by another deejay.

In my rave culture chronicle Energy Flash, just reissued in an expanded update with material on the last decade of dance, I do regularly take a close look at how the massive moves to the ever-changing grooves. From trance's ecstastic, arms-aloft, open-body gestures to junglist's shadow-boxing and panther steps, the way people dance tells you a lot about the spirit of the scene. Trance offers a quasi-mystical refuge from reality, whereas jungle is about bringing the street's tension and dread onto the dancefloor. In America, the rave style of dancing known as "liquid"--full of complex undulating moves that bring to mind the rippling frond-like shapes of Mandelbrot fractals--gives you a good clue to what drugs these kids are on, but also expresses the deep philosophical principles of America's version of rave (all those cyberdelic stuff about data flow and connectivity). 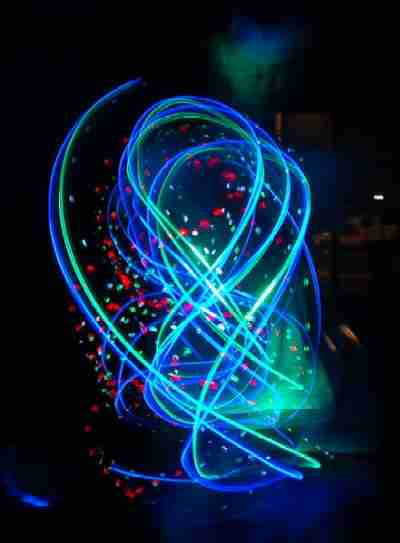 Gabba dancing started out looking like a cross between kickboxing and skating (loads of motion, but only below the knees) and has recently evolved into "jumpstyle" (imagine speedfreaks Morris dancing on a freshly buttered pavement). But the common thread is a folk dance-like quality that totally fits the Nordic funklessness of gabba music. You can even tell something from when people don't dance, whether it's grime (where fans either mosh frenziedly, or stand stock-still headnodding to the word-flow) or microhouse, where those who do dance jig about in a mild, indistinct sort of way but an awful lot of punters just seem to be there to drink and talk.

I follow these shifts and differences in dancefloor behavior not just because of the sociological information they manifest, but because it's fascinating. And as someone who's moved through a number of scenes over the years as a participant-observer, I've noticed how quickly you become trained in the right way to move. Immersion in the massive triggers our human impulse to fit in, belong, share. I love to watch dancers, both the exceptionally graceful virtuosos in every crowd and the multitude's standardised moving-and-grooving. But I also like to have a go, to join the crowd and contribute in my own small and clumsy way to the tribe-vibe. Dancing is the surest way to get inside the music, to feel it and know it (in almost the Biblical sense). The music is the screenplay, but it's we the dancers who make the movie. 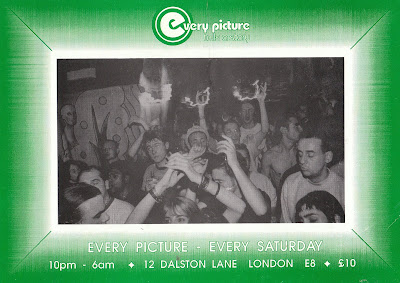 Posted by SIMON REYNOLDS at 9:03 AM

Out of interest, ever in Sir Henrys, now deceased, in Cork, Simaon? Unbelievable atmosphere there back in the day.

That should be, as you probably know... Simon.

no i never was

Naturally, a new romantic band tinged with something of a punk aesthetic, particularly in the rhythm section.

You know, I guess the reason that journos don't talk about dancing is because they so rarely dance. Or because dancing is an intensely personal experience and (IME) when you try and talk about how the music makes you dance you get really self-conscious and have to make it a bit silly... Also, it's only famous up-themselves DJs who don't dance, and they're idiots. I'm only a shit smalltime DJ and I dance even when I'm DJing... if it doesn't make you move you're taking playing someone else's records to drug-fucked people far too seriously and need your ego retuned.