from the Techno Sucks, Vol 1 EP by Lunatic Asylum, aka Guillaume Leroux

"Torsion" is my equal first all-time gloomcore tune, alongside "Apocalypse Never" and "We Have Arrived" (although whether the latter is gloomcore or just gabba is a moot point)


but here are a couple of his baby steps towards later, late-90s greatness

good title, not quite there yet sonically

the appearance of the "marching" thematic, in '93 already

from the same pre-PCP EP, and from the side of the record titled "Assault Side" - but nowhere near assaultive enough. Or even at all

this is much better  -

love that sort of whinnying, braying, demonic-jeer sound these guys all used 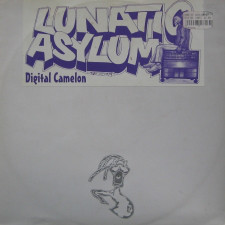 that said, this flipside to "Torsion" - actually the A-side - is rather subdued - not as dark or as forceful as the title promises. Atmospheric though -  good sounds and textures.