that rare thing - black-Eighties retro by a black person *

this is the bowdlerized version of the song, originally called "Sexual Eruption"

Ah, Snoop has previous retro form - appropriately homaging the 70s back in the 90s (it's that 20 year rule of revivalism)


* is it that rare? well, compared to the profusion of white folks retro-ing the Eighties, definitely - they've been doing it so intensively, for so long (longer than the Eighties themselves actually lasted)

Posted by SIMON REYNOLDS at 10:07 AM No comments:

That's a bit... nuumy isn't it? Culture gone on so long now they have to recycle the names

(see also Acen versus One Acen) C Biz #1 = Bizzy B + mysterious DJ Connie (wonder if that is short for Constance or Conrad?)

C Biz #2 = rising road rapper / UK drill man, who is interviewed in this doc by Mike Skinner
(who ought to relaunch his project and call it The Roads)


Well who knew Skinner's been into this stuff for almost a decade?

Weird to hear Mikey S so Auto-Tuned on the chorus...

Jonny + Andy chewed up D&B, swallowed the good bits, spat out the rest - and turned it into supapop for the Y2K.  So potent that Posh Spice wanted to get on board.

Never heard anything else by the True cru

And  (who knew) a whole bunch of other bits

Now tell me, is this the only example in the entire history of Nuum remakes of early nuum-phase anthems (e.g. UKG revamps of ardkore or jungle tunes), where the remake is remade by the original maker?


Ah now this, this, is interesting - it could just be taken as 2step cover of SOS Band's Eighties R&B gem  "The Finest"....

But really - for those who know - it is obviously meant to signify as a remake of ardkore classic "Finest Illusion (Illegal Mix)" by Foul Play, since that more or less swallows whole the vocal from the SOS Band tune

Funny thing, only two years or so before going 2step and Top of the Pops, Jonny Lisners was doing tracks like this

It is the same beat as the more basic 2-step garage beats - but the feel is completely different - unsexy, unrelenting, no swing, no sensuality - like a nail gun

Your guess is as good as mine

It's almost certainly not.

That video is the perfect distillation of the neurofunk spirit

I do like the album Sawtooth (recently reissued) though

What a canny leap from the dead end of D&B in 1998-99, to the lissom (and more lucrative) pastures of UKGstep

Jonny L was a bit of a shall we say nimble shifter though - for instance when the ardkore tide went out, he moved from doing things like "Hurt U So" to things that were more like pop trance or progressive

But definitely straying from the nuum track.

Also much more Euro in feel

And this - the full mix of "Out of Your Mind"


Number Two in the UK charts!

"This tune's gonna punish you"

Posted by SIMON REYNOLDS at 8:56 AM 4 comments:


Posted by SIMON REYNOLDS at 8:45 AM No comments:

Was thinking the other day, it's been ten years - more or less, give or take - of postdubstep

And was wondering "where's it at now, then?"

And also "what did it amount to?"

Here's a compilation, on Bristol's Timedance label, and a review of it (by Philip Sherburne), that provides some answers

Phil places the comp in the company of "iconic UK label documents" such as Warp’s Artificial Intelligence, Mo Wax’s Headz, and Night Slugs Allstars Volume 1" - all of which he says were "surveys of a landscape in flux, less repositories for an established sound than catalysts for a new upheaval".

Weeeeeell, the first two of those, I always thought, were actually pretty patchy compilations - although they certainly captured a Moment, it's true.

1/ a deficit of anthems.

I'm not sure I would agree that even that qualifies as an anthem to be honest - it's got a strident beat, yes - but you need more than that to achieve anthem-hood.  Anthems - think 2BM "Bombscare," Renegade "Terrorist," Double 99 "Ripgroove"  - are purpose-built to massive-fy a dancefloor. They contain embedded behavioral cues that trigger synchronised crowd responses; they appeal to the crowd-as-body.  Postdubstep tracks, when I listen to them, I don't picture a scene, a social tableau.

2/ a deficit of definition.

Phil rolls out the potted history ("the story of UK dance music is a story of mutation: of soundsystem culture and breakbeat hardcore colliding to create jungle and drum ’n’ bass; of American house that spawned its mutant UK garage; of the darkside 2-step that would morph into dubstep, that (briefly) world-conquering sound that rampaged like a world-conquering robot") as set-up for the inevitable pivot to the "2010s be different times" argument (i.e. we've moved past the era of genres and scenes):

"But aside from a few exceptions—specialist subgenres like UK funky, drumstep, and bassline house, also sometimes known, fittingly enough, as “niche”—the UK hasn’t generated many new styles in the past decade. That doesn’t mean that the process of evolution has hit a wall; it has just diversified and diffused. Instead of yielding distinct, readily identifiable rhythmic signatures, club music’s innovations have become restless, reinventing themselves at every turn. Seeking new ground across an expanded array of tempos, cutting-edge club music has poured its energy into shape-shifting textures and timbres. It’s a tough time for those of a taxonomical bent, but a golden age for listeners who like to be surprised at every turn."

Ha, yes, that's me for sure - "of a taxonomic bent". Definitely!

But more importantly I'm of a wanting to be shocked, brocked, shaken - and then, much later, stirred to write a thinkpiece about it ;)

It's good -  I didn't feel like I'd wasted 7 minutes of my life afterwards. But I don't hear anything in it that feels 20-years-in-advance of Optical's "To Shape The Future." The production is more detailed and more spatially contoured. But that's just 20 years of upgrades innit?


So for me, it's been ten years of diffusion (as Phil writes) but also of defusion - as in a bomb being defused.

But I know there are others who disagree...  who are trying to formulate this postpostdubstep moment, write up it as an adventure.

And everybody deserves a shot at making their own time seem and feel like an adventure.

Good luck to them.
Posted by SIMON REYNOLDS at 8:27 PM No comments:


Michaelangelo Matos alerts me to the fact that The Pirate Archive have recently uploaded a heap of vintage 91-92 sets from Rave FM,  the Nottingham pirate station. And furthermore Matos has helpfully sifted out the killer six sets out of the 20 available

lots of tunes unfamiliar to me

and in all of the sets, but especially those two, there's a distinct techno-y feel

which accords with the general principle that the further North you went, the less breakbeaty and the more 4/4 was the hardcore

frinstance, what a surprise to hear "Nightflight (Nonstop to Kaos)" by The Mover towards the end of that long Mayhem set - not something you'd have heard on a London pirate at that time I don't think

Posted by SIMON REYNOLDS at 10:52 AM No comments:

Really enjoying this new Hyperdub album Insula by Scottish producer Joe Powers aka Proc Fiskal. It's a frisky, fidgety weave of grime / Eski / 2step rhythms with glinting splinters of melody and calligraphic tone-smears that seem to come out of the Sakamoto / "Bamboo Music" / B-2 Unit realm. Then  - as an extra flavour - stitched into the fabric of the album there's all these snippets of everyday speech and outdoors atmosphere , seemingly captured on the sly by the eavesdropping mic of Mr Powers.

Interview with Joe Powers at the Quietus.

If you were wondering why the odd name - Proc Fiskal - rings a faint bell, most likely it's cos embedded in the back of your brain (if you're a Brit anyway) is a hazy memory of this:

"A procurator fiscal... is a public prosecutor in Scotland (who, despite the title, has little to do with fiscal issues). They investigate all sudden and suspicious deaths in Scotland... conduct fatal accident inquiries (a form of inquest unique to the Scottish legal system) and handle criminal complaints against the police... For the majority of crimes in Scotland, the procurators fiscal present cases for the prosecution in the sheriff, district and justice of the peace courts..."


Posted by SIMON REYNOLDS at 2:28 PM No comments:

and my fave - genuinely magical tune


Posted by SIMON REYNOLDS at 5:37 PM No comments:

Posted by SIMON REYNOLDS at 5:29 PM No comments:


[The science of drugs] from I•HATE•THIS•FILM on Vimeo.

apt music in many ways

one of the favorite of my book covers 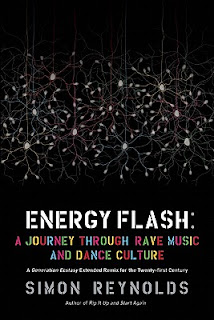 A crunchy mix of contemporary techno + electro from Berlin-resident and vinyl-lover Pearsall,  triggered by my blogpost from early January, The Dream of the Nineties is Alive in Kreuzberg  about a visit month earlier to Hard Wax, the legendary vinyl-only record shop in the heart of the city's bohemian district.

Well worth reading the mix-rationale text for Man like Pearsall's discussion of Berlin as a paradise for bohemian-professionals and how that paradise is coming under pressure from rising rents and gentrification a la New York Paris London...
Posted by SIMON REYNOLDS at 2:02 PM No comments: