D.H.S.  - for a Brit, that name immediately makes you think of signing on....  but in fact it stands for Dimensional Holofonic Sound

This is one of the tracks I bought in the personal interregnum between the first flush of excitement about brutal house / acid house in 87/88, and becoming a born-again raver in the later months of 1991.

So I mentally file "House of God" with a few other things that still  kept half-an-ear of mine trained on the rave sector prior to the full-blown conversion  -  things like the 808 State releases...  that LFO album...   Eon and the Vinyl Solution vybe... Orbital...

"House of God" - is it actually house? Or techno? Back then - 1990-91 -  it didn't matter, there wasn't much of a distinction. Dancefloors were more cross-contaminated genre-wise and flava-wise, before the tempo gap between different strands widened out. Things that had been "acid" or "bleep" and things that would soon be "tribal" or "hardcore" or "trance" or "Detroit" or "breakbeat" - these would all be getting played in the same set by the same deejays to the same crowds in the same clubs.

But I didn't hear  "House of God" on a dancefloor... I think I heard it on the radio... on John Peel, most likely.... and I believe I picked it up at Red Records on Brixton High Street.

Then reviewed it in Melody Maker when it was my next turn to do the Singles. 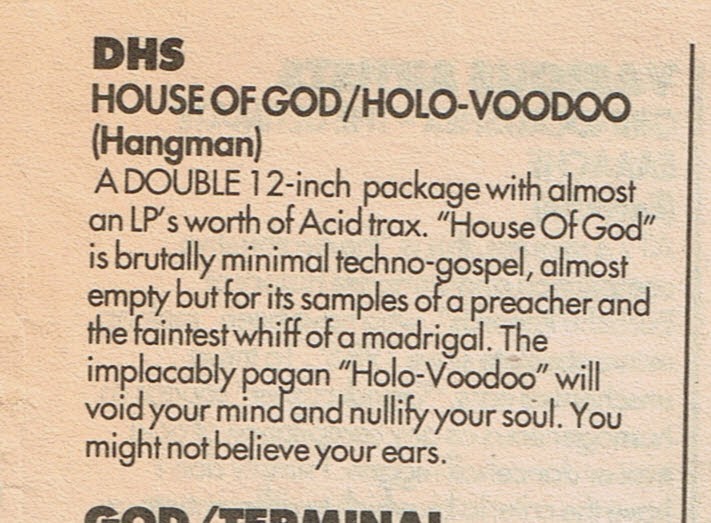 D.H.S. - one of those mysterious anonymous entities so prevalent then. No idea who they/it were, where they came from. For some reason I thought New York.
Nowadays one can glean more information - it's one Benjamin Stokes, a Briton. And rather than a one-off as I'd fondly imagined, "House of God" belongs to quite an extensive discography. There was even a D.H.S. album - The Difference Between Noise and Music.

Hangman Records, which again seemed very mysterious, turns out to be some kind of subsidiary of Rough Trade, with a not insubstantial roster of acts and releases. This was indeed the time of things like Novamute and Rhythm King and Infonet - indies to try to get in on the post-rave action.

That's most of the tracks on the original double pack:


But there's been a heap of  "House of God" remixes, immediately and in the ensuing years, and then there's the later D.H.S. tracks....

And what is this?  An official remake, some time after the event?

Not as good....  and the video takes away more than adds...  see, or rather not-see: that original era of tekno-haus seems to me to be about visual deprivation, the total eclipse of the retinal faculties... pulsing haptic darkness.

Any number of other house tracks based around preacher samples spring to mind, in particular this one, but being an old postpunker I did inevitably think of this:


More of that March 23 1991 Singles Page for Melody Maker, with thumbs-up for Reese and Eon.  The Singles of the Week that week, by the way, were World of Twist "Sons of the Stage" and 1000 Homo DJ's "Supernaut". 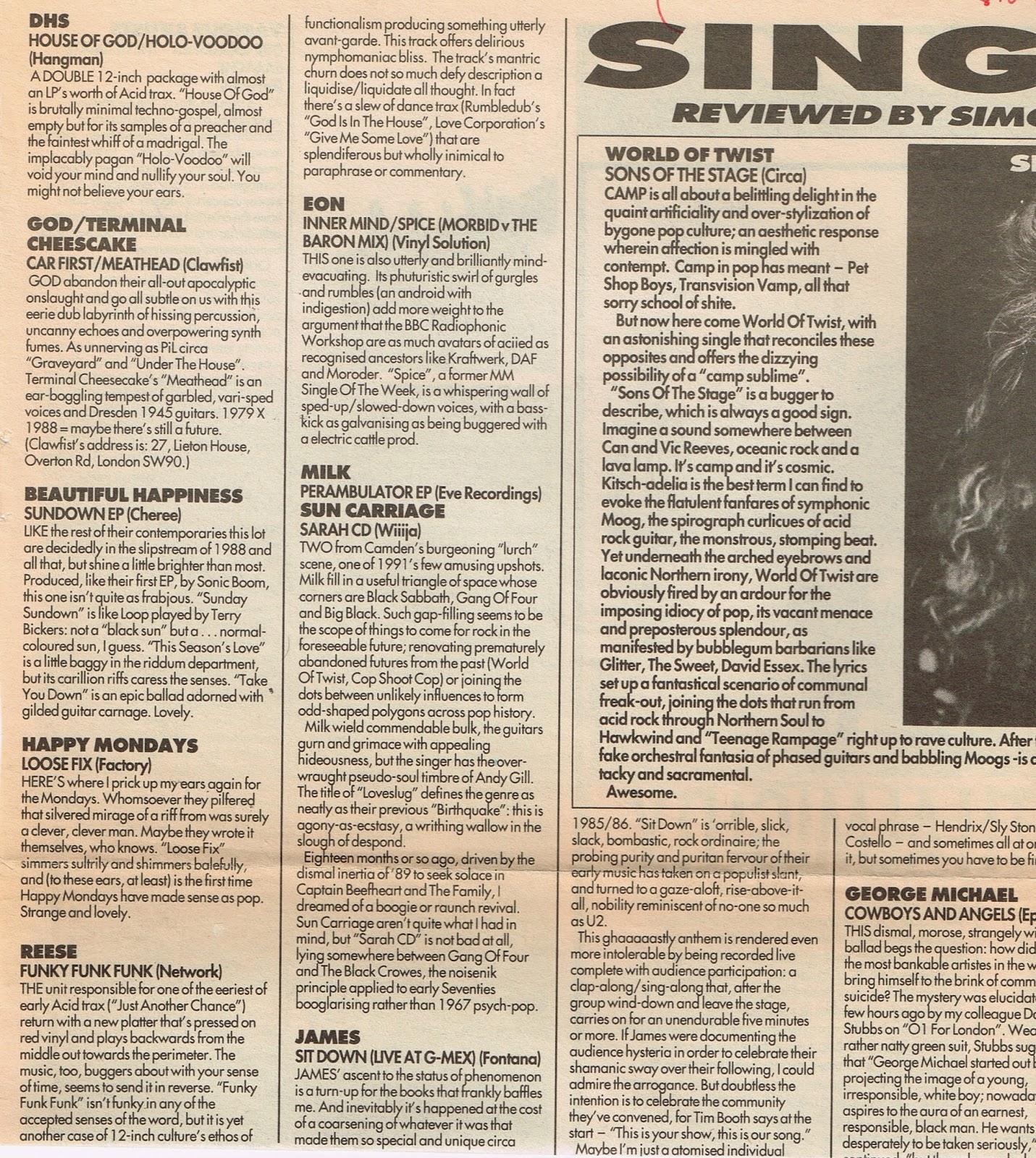 Posted by SIMON REYNOLDS at 9:06 AM

a member of meat beat manifesto, too.