Wiki Entry on La Ruta Destroy translated via Google The so-called Destroy Route (or Bakalao Route as it was known more mediatically) was the direct heir to the "Valencian movement" and consisted of the largest clubbing movement in Spain. Initiated in certain aspects the clubbing movement in the country, and had long-term consequences on the way of nightlife in Spain. It consisted of a nightlife form of thousands of young people among the nightclubs in the metropolitan area of ​​Valencia, especially on the highway of El Saler (CV-500), which included halls such as Barraca, Spook Factory, Chocolate, Espiral, NOD, Puzzle and ACTV, as well as others from the interior (OTK, Onteniente), every weekend, and with little rest, during the 1980s and the first half of the 90s. The Destroy Route is framed within the context of a country that has just emerged from a democratic transition after the Franco era, which in other areas of culture had consequences such as the cinema of the inauguration. Spanish legislation, with regard to nightlife, was still immature due to the legacy of Franco's regime, and was full of legal vacancies, which were used by the entrepreneurs of these clubs. This brought together the least concern and information about drugs in the country. [lot of stuff on the Eighties, popularity of synthpop in Spain - clubs catering to postpunk, Electronic Body Music, industrial dance tastes etc - i.e. not unlike what was happening with Belgium with EBM and then New Beat... or with Frankfurt with Andreas Tomalla's EBM oriented Technoclub from 1984 i.e. pre-existing techno in the Detroit sense. Synth stuff was so big in Spain that a not well known in their homeland UK outfit called A Popular History of Signs could tour there - I used to know a guy who played in that group]

And what follows is an eerily familar narrative arc of rise and fall, heaven becoming hell, as the hoi polloi descend on mass and the quality of the music allegedly plummets as the drug intake and the bpm escalate (naturally I wonder about that... although if there was ever a 'darkside bakalao' it's not mentioned here). Ignorant plebs swarm, the intimate and discerning small clubs get replaced by macrodiscotecas (superclubs I assume), the quality of drugs decline, prolonged no-sleep sessions leading to car crashes (especially as people are coming to Valencia from all over Spain to party, not sleeping or kipping in a sporadic way in their cars in the parking lots, which are a major focus of the scene), arrival of rough and dodgy element, criminals, backlash from media and the authorities... the old familiar story indeed - but full of quirky local variations including a unique drug element in the very early pre-rave days (although then again what was called "mescas" sound a bit like what Britravers would later consume as snowballs).

Others claim that it was a compound with an "acid-amphetamine" mixture, more specifically, a mixture of centraminas and dexedrines, together with lysergic acid diethylamide (LSD). Supposedly, its relative similarity with the true mescaline extracted from peyote made it popularly known by that name. However there are those who claim that it was the true peyote mescaline, but most likely peyote mescaline was also commercialized at that time, but in much smaller quantities, by people who wanted to take advantage of the pull of the "mesca" and that I thought both were the same. But the truth is that peyote mescaline often causes strong side effects nausea and vomiting as well as the effects of great euphoria, drunkenness and hallucinations provided by the "mesca". The most probable hypothesis is the first one, since there are several studies that affirm it . This substance appeared almost entirely in the form of capsules, mainly green, but also red. The existence of the Valencia "mesca" was relatively short, between 1983 and Christmas 1988, when it disappeared almost suddenly, although it is a fact that until the end of the 1980s and the beginning of the 1990s there were still very rare items of those capsules. green, but at exorbitant prices. The hypotheses by which the "mesca" disappeared in that way, given that the reasons are not clear, are several. Perhaps the main factor was the appearance of another amphetamine substance, amphetamine sulfate, popularly known as "speed". This substance was cheaper to produce and buy.

In fact the price of mescaline suffered a great escalation to be placed at prohibitive prices, especially is said following the popularization of the song of Los Rebeldes "Mescalina" (1986), which would lead to drug users decant for other substances. In addition, the "speed" supposedly provided greater effect against sleep, and that was an important factor in a time in which the schedules were lengthening in an excessive way. It provided a feeling of similar euphoria, and a greater energizing effect that imprinted the body with more speed, made more suitable for the BPM (revolutions per minute) of the second half of the 1980s. On the contrary, it lacked the sensation of false drunkenness and hallucinations. This substance, consumed mostly as white powders by the nostrils, was the main substance consumed between 1986 and 1988, the year in which the MDMA or ecstasy appeared on the Valencian scene. Ecstasy came from the Netherlands and was also present in Ibiza. It began being commercialized in the form of small brown tablets popularly known as "inflones". Over time they would be marketed as pills in a variety of colors and printed symbols. He had a certain hallucinogenic character in the aspect that seemed to "open the mind to the senses", giving the impression that the senses were becoming more acute. These three were the main substances consumed in the main discos of the movida, but others such as marijuana and hashish, or LSD (the popular "tripis") also used to be seen, although with much less frequency, since they either relaxed, or they disconnected from the music.


I suspect a lot of the analysis in this Wiki entry is derived from this book, which I believe I have somewhere 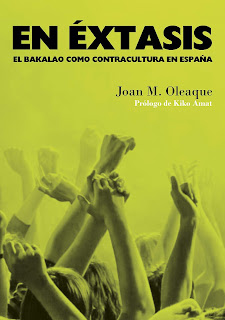 Muchos fascinitos! Will have to delve into this further. Thanks Simon.