I feel that Ziggy and Matt are speaking to each other, even if neither knows it
Criss exercises in rhythm geometry, separated by a couple of decades

Little Mat's masterpiece, though, is this:

Well, you learn something everyday - there were two Mats / Matts involved there -  and one was Matthew Cole, later known as MJ Cole, don of "musical" 2step garage. Lil Mat himself = Matt Quinn - later Optical, neurofunk pioneer.

That's some right nummy-nuum stuff there for you.

Apparently all the vocal samples in "Babylon Timewarp" come from this film!

The non-vocal Jamaican licks sampled though, nobody seems to know where they're from

The breakbeat fabric is woven through with strips of roots reggae riddim, which brings out another axis to the space-time triangle - the way the New Orleans sound (I particularly hear it with Lee Dorsey) affected The Upsetters et al.

the opening lick of this

Back to the main axis here, the invention of breakbeats in the late Sixties.... and their return in bionic form in the early '90s.... Modeliste roboticized...

With Ziggy, the backbeat becomes the foreground focus - the hook (he makes the drums sing). And that's the exact same inversion of sonic hierarchy wrought by jungle.

"My first ever paid remix was of this tune! The original track was a cult classic badass tune!!! They made breakbeats sound so powerful and perfect at that time...with a lot of new techniques that I needed to learn in my own work.

"I did the remix with my friend Matt (MJ Cole) in Intense's studio in Earl's Court in London with Dan, Simon and Beau to help us as I had never remixed anyone else's song at that point...

"I worked with MJ Cole at Lazerdrome in Peckham doing the lights in 1992 and I knew the guys from Intense through my friend Nut-E-1, they were making the coolest music at that time and this was a killer tune! They asked us to do the remix and helped us with getting it to sound good....I had only had my first proper release a year before so they were like the guru's of breakbeat to me...I learned a lot from them around that time about production"

The name Babylon Timewarp (the "timewarp" fits the subject under discussion - transmissions across time and space, drumming as molding and folding of time itself) makes me think of this record... and this particular video, which cleverly brings out the GIF-ing of R&B and reggae riddim, the retriggering of breakloops.... roots hurtled into phuture

Another record that seems to fit this cluster of "Durban Poison" and "Babylon" is Criminal Minds's "Baptised by Dub"
"Now you know / can't beat the system / Go with the flow"
Criminal Minds have a massive discography; Splash, though, doesn't appear to have done anything else much, a few other tunes, and then a bunch of fairly standard rinser / roller type tunes as Undercover Agent.

What about Babylon Timewarp?

This was on the flip

However they were also known as Intense, under which alias they were pretty active, and The White House Crew (less so)

I appreciate the use of this phrase in the title - "the quickening" always seemed poetic to me, a word for those electric moments or phase-shifts in one's life, when your mind or heart wakes up to an awareness of whole other dimensions of existence. Or it could be a period in an entire culture's life.

(Apparently the expression comes originally from the moment the mother becomes aware of the unborn child as a living presence, moving inside)

The rest of We The Ragamuffin

Tricky had a tune about Durban Poison didn't he?

Actually, no, it was the name of a label he started. 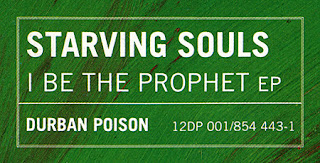 Posted by SIMON REYNOLDS at 9:13 PM

yes i picked that up!

Matt Quinn... The man is such an OG. No matter how much I *think* I know about the roots of Jungle and DnB music in the UK, there is always some insane credit involving Matt Quinn (many unpublished) whether it was engineering, mixing, remixing, or simply just bein present in the studio! Thank you for these nuggets of knowledge, Simon.