Where's Yr Child is this LA-based irregular club / DJ collective involving Sun Araw's Cameron Stallones, ex of the NNF family. The name is a nod to this acid house classic.

And then there's this image which bestrides the website--an all-black crowd of dancers with hands raised ecstatically: 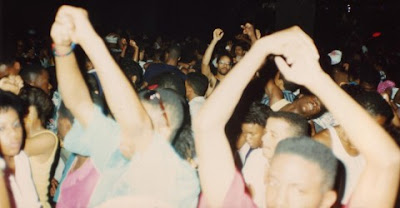 I grabbed that image off of the WYC website and the jpeg has the title "cropped paradise garage". so that's what the pic is: Levan's congregation

i suppose that's no different from German techhouseheads calling a club Robert Johnson or indeed the Rolling Stones naming themselves after a Muddy Waters song.. but something about it jarred... i haven't been to a Where's Yr Child, but somehow I'm guessing the audience composition of a typical night is rather different, and probably so is the atmosphere...

right now, along with the Paradise Garage shot, WYC have a picture of a mass of mostly white ravers. But generally the iconography at Where's Yr Child is black--supersharp dancers at various clubs from several decades ago, a picture of dancehall act Scare Dem Crew, a Rasta with enormous bulbous infolded dreads. And didn't I read that Stallones is actually making a record with The Congos?

"Impluvium", the last track on Ancient Romans, the new, dense-with-detail Sun Araw record, is a house jam of sorts...


i suppose there's a natural fit between digging psychedelic rock and digging psychedelic dance... indeed now and then the wah-wah glare of Sun Araw makes me think of baggy's trippier, looser-fitted moments... that Stone Roses B-side "Something's Burning"... the Can-nier side of Happy Mondays... even Cope's copping a baggy feel on Peggy Suicide

i wonder how he (and "they", in general) got into this stuff in the first place (meaning house, acieed, balearic etc)... most likely from a completely different route than contemporary club people get "there"... i.e. not from clubbing but from records, books, Internet deposits (Hot Mix 5 radio sets from Eighties Chicago, Baldelli mixes, Youtubes of classic jams).

(i wonder how i'll feel if/when this crowd latch onto the stuff i really cared about/lived through... "hipster hardcore", "hipster jungle")

then again, I do recall reading somewhere that Stallones comes from a heavy duty religious background... so perhaps there's an underlying trance-endental logic that connects the attraction to psychedelic/kosmische rock, roots reggae and house in both its acid and gospel-deep strands

as the sample on that Ultramarine tune (forget which one) puts it "they're searching for spiritual reasons, they're looking for something more than this world has to offer"

Posted by SIMON REYNOLDS at 9:47 PM