Bleep lives right at the heartcore of Energy Flash, my history of rave culture. It was the first uniquely British twist on house and techno. Rave had started out as that strange thing, a subculture based almost entirely around import records. In 1988-89, DJs had several years backlog of house classics to spin, plus fresh imports from Chicago, Detroit and New York each week; the homegrown tracks, mostly inferior imitations, just couldn't compete. But in 1989, a track called "The Theme", produced by Unique 3--a Bradford-based crew of B-boys turned ravers--announced the arrival of a fresh UK sound merging Chicago acid with elements from hip hop and reggae. In a paradox that would endure and intensify throughout the subsequent evolution of rave, what made it "British" was its incorporation of ideas and "vibe" from Jamaica and Black America. From bleep to 2step, jungle to grime, this country would host mutations that for various reasons were unable to hatch in the more purist and protectionist U.S. house scene.

"Bleep 'n 'bass" was an alternative name for the wave of North of England techno that followed Unique 3. "Bleep" referred to the electro-style pocket-calculator synth-motifs; "bass" nodded to the floor-quaking sub-low frequencies. Initially inspired by "The Theme" (which they tried unsuccessfully to license), Sheffield-based Warp quickly became the crucial label. Paralleling moves being made in London by ex-B-boy outfits like Shut Up and Dance but avoiding the use of looped breakbeats, the Warp outfits--Sweet Exorcist, Forgemasters, LFO, Nightmares on Wax--retained acid's tripnotic compulsion but programmed a skippy syncopation into their drum machine beats that looked ahead to jungle rather than backwards to house. 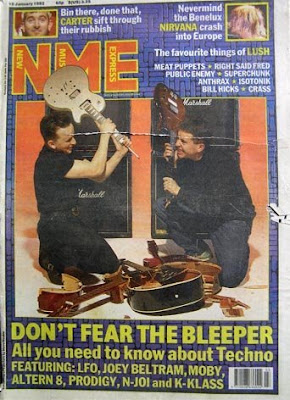 What's striking about bleep listening to it today is how well-produced these tracks sound. There's none of the low-resolution cruddiness of sample-and-breakbeat based hardcore, but a glistening thickness of texture and beat that comes from using analog synths and drum machines, and, in some cases, from making the tracks in professional studios rather than using home studio set-ups. Yet despite its time-defying excellence, bleep is poorly served in terms of compilations: basically, there's Warp's Classics double-CD, plus out-of-print comps from the original era. But the good news is that the original vinyl is easy to find. Because bleep dominated the British rave scene between late 1989 and early 1991, the classic tunes were pressed in large numbers, so there's lots of copies still floating around at reasonable prices.

Bleep's legacy? You can hear the era honored in the output of maverick producers like Rustie and Neil Landstrumm (whose overt homages include "Big in Chapeltown", "Bleep Biopsy" and " Yorkshire Steel Cybernetics”). But bleep's reverberations resound most potently in UK garage's offshoot genres, from dubstep's cold cavernous production and fetish for "bass weight" to the sweet 'n' sour synth-tones and deliriously inventive bass science of bassline house. The latter's homebase cities--Sheffield, Leeds, Leicester, Birmingham--are the exact same industrial swathe from South Yorks to West Midlands that spawned bleep. This is no history lesson, then, but a living thing.

Kickstarted by the hilarious vocoderized mission statement "we are the original acid house creators/we hate all commercial house masturbators," this seminal track marks the rebirth of rave as an underground sound--hard 'n' dark 'n' strictly for the headstrong. Motored by a miasmic bassline that recedes into the mix then swarms back to subsume your consciousness like malevolent fog, "The Theme" is the UK coming up with a creative response to "Acid Trax" rather than just a faint reflection. But the ultra-minimal flipside track is even more inventive: just bass, space, and a plinky percussion riff that sounds like a xylophone made out of a dinosaur's ribcage. The title "7-AM" evokes that eerie pre-dawn moment at the rave when the comedown's coming on and only the diehardcore ravers are still standing.

With a name that doffs a flat cap to Sheffield's Steel City mythos and a title that turns acid house's radical anonymity into baleful mystique, Robert Gordon, Winston Hazel and Sean Maher were in the business of "faceless techno bollocks". Bowel-quaking bass, an Art of Noise-like vocal lick, and beats as punishing and precise as a foundry's drop hammer.

Sweet Exorcist were Richard H. Kirk from Cabaret Voltaire and Sheffield's DJ Parrot, and "Testone" is a classic example of bleep's sensual austerity: the barest components (growling sub-bass, a rhythmic web of Roland 909 klang and tuss, and a nagging sequence of five bleep-tones) are woven into something almost voluptuous. The title comes from the test tones built into synths and samplers, while the opening soundbite--"if everything's ready here on the dark side of the moon, play the five tones"--is sampled from Close Encounters of the Third Kind.

Famed for their Leeds Warehouse dubplate sessions and later to become the digidub outfit Iration Steppas, Ital Rockers broadcast their Jamaican roots loud-and-proud with the opening sample "riddim fulla culcha, yah!". But you can tell where they're coming from just as easily from the shocks of mighty bass-pressure and the arabesque melody that could almost be Augustus Pablo if he'd swapped his melodica for a Yamaha synth.

Kraftwerk reincarnated as a pair of teenage ex-breakdancers from Leeds, LFO's Mark Bell and Gez Varley took bleep into the Top 20 with this immortal classic. Portentous and momentous like "Trans-Europe Express", the opening synth-chords make you feel like you're being ushered you into the prescence of greatness. Then that dark probe of a bassline bores its way into the depths of your brain, via your anus. LFO would go on to record the immaculately inventive Frequencies, one of electronic dance music's All Time Top 5 Albums.

Before they reinvented themselves as rave jesters Altern 8, Mark Archer and Chris Peat were devout Detroit disciples who combined Carl Craig-style calligraphic intricacy and wistful emotion with bleep's brutalist bass. Stand-out "Self Hypnosis" shimmers with limpid synth-pulses up top, but the low-end rattles your bones. 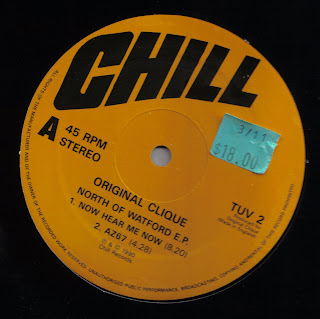 The U.K.'s answer to Mr. Finger's acieed-era classic "Washing Machine", this EP's standout track "Now Hear Me Now" is a mantra for a state of mindlessness. An inane sample (note that redundant "now") loops endlessly over a nodding-dog groove and fingernails-on-blackboard synth-noise. The missing link between "Autobahn" and autism.

Famous as the label that brought Detroit techno to the UK, Network shrewdly hopped on the Northern bandwagon and by 1990 were tagging themselves the home of "Dance Music With Bleeps". No ideal boast, either, thanks to Mark Gamble and Leroy Crawford, a.k.a. Rhythmatic. On "Take Me Back", the shimmerfunk of Kevin Saunderson/Inner City is given a butt-blasting dose of low frequency oscillations. Then Forgemaster Rob Gordon adds even more.

A mindboggling soundclash of Kingston, the Bronx, and, er, Rimini. The latter is whence hails the Italo-house piano vamp that chatters brightly over the tectonic plate shaking 808 bass, frisky electro beats and vast vistas of empty space that make up the rest of the track. This mix is named after the Soundyard, the legendary 1987-90 Bradford club founded by Unique 3's Edzy.

From the psychedelically-reversed vocals and migraine-wincing noises to the eerily reverbed samples of Cuba Gooding Snr announcing "there's something going round inside my head… it's something unreal," this is darkside bleep whose clammy delirium captures the moment when Ecstasy becomes agony. "Aftermath" anticipated jungle not just with its bad-trippy paranoia but with its scowling bass and jittery, breakbeat-like rhythms. The British "Energy Flash"?

Chirpy chirpy bleep bleep: "Tricky Disco" represents the lighter side of UK rave circa 1990, bouncing along on an air-cushioned beat and sugared with helium-squeaky cartoon chipmunk vocals and proto-ringtone ripples of synth. Tricky Disco was just one of a host of alter-egos for that prolific partnership Lee Newman and Michael Wells, who also recorded as GTO, Church of Ecstasy, John + Julie (perpetrating the fearsome bass-shredder "Circles"), Force Mass Motion, Technohead…

The South gets in on the act. Taking their name from a Philip K. Dick novel, Ipswich-bred Viv Beeton and Dave Campbell (later to operate as Hi-Ryze) specialized in austere but atmospheric techno attuned to the darker side of Detroit. On this EP's bleep-aligned "Bass Generation", though, the sound is emaciated electro: the duo cut the mid-range and boost the bass and the treble. Result: sub-aural bass-pressure below, whispery wraithes of synth and hi-hat above, and a chasm of shocking emptiness in between.

Rave acts almost always stumbled when it came to the obligatory Album (see also Shades of Rhythm) but amid the mixed bag of commercial house and unconvincing UKrap that is Jus Unique there's some bleep classics, most notably "Phase 3", whose sagging drone-tones and weird blend of lush and harsh looks ahead to the mind-twisting directions that would spiral off hardcore in the near-future, from gloomcore gabba to darkside jungle.

Deceptively named, this outfit, for "Join" is bleep's dreamy, "musical" side. With its sinuously undulating bassline and almost-jazzy piano vamps, this midtempo chugger makes the future seems like not such a bleak break with the past as bleep's harder and harsher contingent. 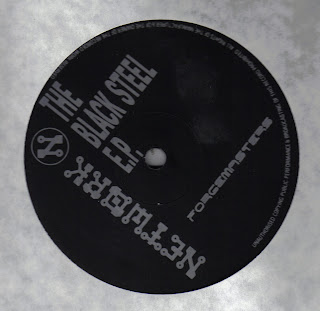 Killer track: "Stress". Staccato bass pulses as svelte and deadly as a robo-panther mesh with glancing, glinting synth-tones so wincingly sharp they give your ear-drums papercuts. Then the bridge: clanky tingles that sound like they're played on a gigantic xylophone made from icicles and stalactites. (And is that a submerged nod to Public Enemy in the otherwise Sheffield-celebrating EP title?). 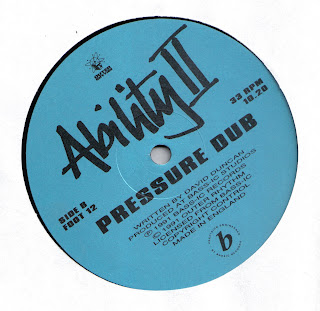 The missing link between bleep and digi-dub, Ability II wave the red, gold and green on "Pressure", their solitary release. Skip the full vocal A-side for the gorgeous mirage of the flipside dubversion, where the stealthy and steadfast midget submarine that is the B-line trails a wake of sublimely shimmering reverb.

Sweet Exorcist's Richard H. Kirk and Forgemaster Rob Gordon team up for this coldly compelling one-off. All whiplash percussion and spectral synths, "Dissonance" is the prize here. Its "ooh, ooh, techno city" hook, sampled from Cybotron (Juan Atkins' first group) might be homage to Detroit. But it could equally be serving notice to the Belleville Three: watch out, Sheffield is the world capital of electronic music. Again. Because, actually, that Cybotron vocal sounds suspiciously like early Human League… 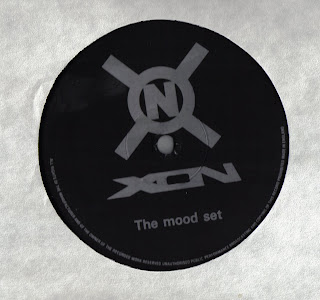 Bleep at its most sophisticated, the final tune on this seven track maxi-EP (or is it mini-LP?) starts with a dizzy-making roundelay of dub-delayed bleeps, falls into a strange loping sashay of a groove, and blossoms into a fiesta of textured percussion, clanking bass, and densely clustered electronic tonalities. 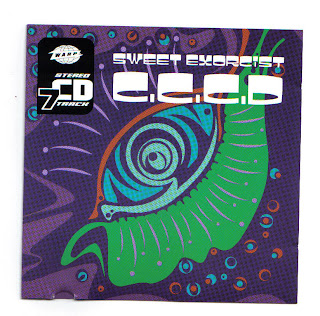 Twilight-era bleep, the almost eight minute long "Feel It" offers an awesomely intoxicating mood-clash of sultry sensuality and forbidding sang-froid. Stalking bass, seething percussion, whistles, the feverish chant "doncha doncha don't jerk it/work it", and THEN, that supreme rush-activating sample "fee-eee-eee-eee-eee-ee-eel it", taken from The Peech Boys (via Todd Terry?) and riven by an Ecstatic shudder of drop-out.

Where better to end than with LFO voicing the question originally raised by bleep itself--just how far can house music be stretched and still be house? With its gnarly synth and electronically-distorted spoken-not-sung vocal, the title track sounds like the Fall if Mark E. Smith was reborn as a 20 year old South Yorks pillhead. The concise lyric pays homage to "the pioneers of the hypnotic groove"--from Phuture, Fingers Inc and Adonis to Eno, Tangerine Dream, YMO, Kraftwerk and Depeche--but like all tributes implies: we're more-than-worthy inheritors.

Version at the FACT website -- longer than what was printed in the magazine, but here comes with pretty pix of all the record labels and/or covers.

Me on Neil Landstrumm
Posted by SIMON REYNOLDS at 1:07 PM

Nice selection of Bleeps there...

If you ever manage to dig it out, check out 'Mad Bastard' - I am the Future

Northern Bleep at its finest